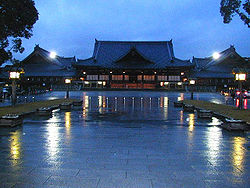 Tenrikyo (天理教, Tenrikyō?), sometimes rendered as Tenriism,[1] is a monotheistic, Shinto-derived new religion originating from the teachings of a 19th-century Japanese woman named Nakayama Miki, known to her followers as Oyasama.[2][3] Followers of Tenrikyo believe that God, known by several names including Tenri-Ō-no-Mikoto, expressed the divine will through Nakayama's role as the Shrine of God, and to a lesser extent the roles of the Honseki Izo Iburi and other leaders. Tenrikyo's worldly aim is to teach and promote the Joyous Life, which is cultivated through acts of charity and mindfulness called hinokishin.

The primary operations of Tenrikyo today include 16,833 locally managed churches in Japan,[4] the Jiba in Tenri, Nara, the oyasato-yakata, and many other community-focused organisations. It has 1.75 million followers in Japan,[4] and is estimated to have over 2 million worldwide.[5] Tenrikyo is classified as Japanese new religion because it was founded in the 19th century.

The most basic teaching of Tenrikyo is kashimono-karimono, meaning "a thing lent, a thing borrowed". The thing that is lent and borrowed is the human body. Tenrikyo followers think of their minds as things that are under their own control, but their bodies are not completely under their control.[6]

The Joyous Life in Tenrikyo is defined as charity and abstention from greed, selfishness, hatred, anger and arrogance. Negative tendencies are not known as sins in Tenrikyo, but rather as "dust" that can be swept away from the mind through hinokishin and ritual. Hinokishin, voluntary effort, is performed not out of a desire to appear selfless, but out of gratitude for kashimono-karimono and shugo (providence).

Adherents believe in a single god, Tenri-O-no-Mikoto, who is defined as the creator and caring parent of all human beings. It is also taught that the universe is the body of God. The ultimate spiritual aim of Tenrikyo is the construction of the Kanrodai, a divinely ordained pillar in an axis mundi called the Jiba, and the correct performance of the Kagura ritual around the Kanrodai, which will bring about the salvation of all human beings. The idea of the Jiba as the origin of earthly creation is called moto-no-ri, or the principle of origin. A pilgrimage to the Jiba is interpreted as a return to one's origin, so the greeting okaeri nasai (welcome home) is seen on many inns in Tenri City.

Reincarnation is part of the religion, in the form of denaoshi, "passing away for rebirth."[7]

Other key teachings include:

Tenrikyo uses metaphors from construction, carpentry, and farming to help followers to understand the teachings in its scriptures. It visualizes the construction of a better world as a step-by-step process, in which people can make small steps forward by working together. Spiritual growth in Tenrikyo is also viewed as a step-by-step process in which followers walk their own paths at their own pace.

File:Tenrikyo manga.jpg
Frame from a Tenrikyo manga. The translation of the text is roughly, "Just being alive makes me happy! What a waste it would be not to show some initiative!"

Tenrikyo is subdivided into many different groups with common goals but differing functions. These range from the Daikyokai (lit. large church), to disaster relief corps, medical staff and hospitals, universities, museums, libraries, and various schools.

Tenri Judo is renowned as a successful competition style of Judo that has produced many champions, while there are also other sporting and arts interest groups within Tenrikyo.

In Tenrikyo tradition, Nakayama Miki was chosen as the Shrine of God in 1838, after her son and husband began suffering from serious ailments. The family called a Buddhist monk to exorcise the spirit causing the ailments. When the monk temporarily left and asked Miki to take over, she was possessed by the One god (Tenri-O-no-Mikoto), who demanded that Miki be given to God as a shrine. Miki's husband gave in to this request three days later.

Nakayama Miki's statements and revelations as Shrine of God were supplemented by Izo Iburi, one of her earliest followers, who developed a position of revelatory leadership as her deputy, answering questions from followers and giving "timely talks". His position, which is no longer held in Tenrikyo, was called Honseki. The revelatory transmissions of the Honseki were written down and collected in large, multi-volume works called Osashizu. Following Izo's death, a woman called Ueda Naraito partially carried on this role for a while, although it appears that she did not the actual title "Honseki". Since then, Tenrikyo itself has never had a Honseki, although some Tenrikyo splinter groups believe that the revelatory leadership passed from Iburi to their particular founder or foundress.

Miki Nakayama's eldest son obtained a license to practice as a low-ranking Shinto priest from the powerful Yoshida branch of Shinto in 1867, but did so against his mother's wishes. Tenrikyo was designated as one of the thirteen groups included in Sect Shinto between 1908 and 1945 under State Shinto. [8] During this time, Tenrikyo became the first new religion to do social work in Japan, opening an orphanage, a public nursery and a school for the blind.[9]

Although Tenrikyo is now completely separate from Shinto and Buddhism organizationally,[citation needed] it still shares many of the traditions of Japanese religious practice. For instance, many of the objects used in Tenrikyo religious services, such as hassoku and sanpo, were traditionally used in Japanese ritual, and the method of offering is also traditional.

Tenrikyo utilises traditional musical instruments in its otsutome (lit. service or duty), Hyoshigi (wooden clappers), Chanpon (cymbals), Surigane (small gong), Taiko (large drum), Tsuzumi (shoulder drum), Fue (bamboo flute), Shamisen, Kokyū, and Koto. These are used to play music from the Mikagura-Uta, a body of music, dances and songs created by Nakayama. Most of the world's foremost authorities on Gagaku music (the ancient classical Shinto music of the imperial court of Japan) are also Tenrikyo followers, and Gagaku music is actively promoted by Tenrikyo, although, strictly speaking, the Mikagura-Uta and Gagaku are separate musical forms.

The Otsutome or daily service consists of the performance of the seated service and, optionally, the practice of a chapter or two of the 12 chapters of Teodori(lit. hand dance) or Yorozuyo. The daily service is performed twice a day; once in the morning and then in the evening. The service times are adjusted according to the time of sun rise and sun set but may vary from church to church. Service times at the Jiba in Tenri City go by this time schedule and adjust in the changing of seasons.

Instruments used in the daily service are the Hyoshigi, Chanpon, Surigane, Taiko, and Kazutori (a counter, to count the 21 times the first section is repeated). The Hyoshigi is always played by the head minister of the church or mission station. If the head minister is not present, anyone may take his or her place.

The daily service does not need to be performed at a church. It can be done at any time and anywhere, so long as that one faces the direction of the Jiba, or "home of the parent."

The purpose of the daily service, as taught by Miki Nakayama, is to sweep away the Eight Mental Dusts of the mind.

Hinokishin (lit. daily service) is a spontaneous action that is an expression of gratitude and joy for being allowed to "borrow" his or her body from God the Parent. Such an action ideally is done as an act of religious devotion out of a wish to help or bring joy to others, without any thought of compensation. Hinokishin can range from helping someone to just a simple smile to brighten another person's day. Examples of common Hinokishin activities that are encouraged include cleaning public bathrooms and parks among other such acts of community service. Doing the work that others want to do least are considered sincere in the eyes of God.

Hinokishin is a method of "sweeping" the "mental dusts" that accumulate in our minds. The "mental dusts" are referring to the Eight Mental Dusts. The official translations of these dusts are: Miserliness (Oshii), Covetousness (Hoshii), Hatred (Nikui), Self-love (Kawai), Grudge-bearing (Urami), Anger (Haradachi), Greed (Yoku), Arrogance (Kouman).[10]

Tsukinamisai or the monthly service is a performance of the entire Mikagura-Uta, the sacred songs of the service, which is the service for world salvation. Generally, mission headquarters and grand churches (churches with 100 or more others under them) have monthly services performed on the third Sunday of every month; other churches perform on any other Sunday of the month. The monthly service at the Jiba is performed on the 26th of every month, the day of the month in which Tenrikyo was first conceived – October 26, 1838.

Instruments used in the monthly service are all of those aforementioned. Performers also include dancers – three men and three women – and a singer. Performers wear traditional montsuki, which may or may not be required depending on the church. 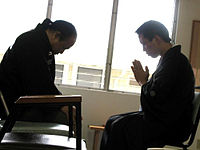 The Divine Grant of Sazuke is a healing prayer in which one may attain through attending the nine Besseki lectures. When one receives the Divine Grant of Sazuke, he or she is considered a Yoboku (lit. useful timber). The Sazuke is to be administered to those who are suffering from illness to request God's blessings for a recovery. However, recovery requires the sincere effort from both the recipient and the administrator of the Sazuke to clean their minds of "mental dust." Only with pure minds then can the blessings be received by the recipient through the Yoboku administering the Sazuke. It is taught that when God accepts the sincerity of the person administering the Sazuke and the sincerity of the person to whom it is being administered, a wondrous salvation will be bestowed. This is accomplished through having the recipient be aware of the mental dusts and the teachings of Tenrikyo to remedy their dusty minds.

In recent years Tenrikyo has spread outside Japan, with foreign branches centered primarily in Southeast Asia and America.[11] Tenrikyo maintains centers in: