Ternopil Oblast (Ukrainian: Тернопільська область, translit. Ternopilska oblast; also referred to as Ternopilshchyna - Ukrainian: Тернопільщина) is an oblast (province) of Ukraine. Its administrative center is Ternopil, through which flows the Seret River, a tributary of the Dnister.

The oblast is located in the West Ukraine and has an area of 13,800 km². It is situated at the western part of the Podilian Upland which is known for its quite rocky terrain. Among noticeable mountains there is the Kremenets Mountains. The oblast is also famous for its caves.

One of the major rivers in the country Dniester forms southern and southwestern borders of Ternopil Oblast with the adjacent Chernivtsi Oblast and Ivano-Frankivsk Oblast. Its tributaries that flow through the oblast include Zbruch, Seret, and Strypa among just few of them. The Seret River (not to be confused with Siret nor Seret) is a left tributary of the Dniester flowing through the oblast administrative center, i.e. Ternopil.

The oblast was created during the World War II when both the Nazi Germany and later the Soviet Union invaded Poland. Due to the Polish national policy in the area (Pacification action), many people favored the Soviet invasion of the Eastern Galicia at first. However soon thereafter the Soviet security agencies started a witchhunt among nationally oriented members of Ukrainian resistance who emigrated to Poland after the Soviet-Ukrainian War as well as other reasons. Many people of local population regardless of their ethnic background were exiled to Siberia. On December 4, 1939 the voivodeship division in the West Ukraine was abolished and replaced with the existing Soviet administrative division oblast. Ternopil Oblast (originally Tarnopol Oblast) was established based mostly on the Tarnopol Voivodeship and southern portions of the Volhynian Voivodeship.

During the invasion of the Soviet Union by Nazi Germany, Ternopil became an object of fierce fighting between Soviet and German forces because of its importance as a rail transportation hub. During Germany occupation the region (except for its Volhynian portion) became part of the District of Galicia and transferred to administration by the General Government. After the war, a destroyed residential section of Ternopil, near the river, was turned into an artificial lake rather than being rebuilt. Additionally, upon annexation to the Soviet Union's Ukrainian SSR, most ethnic Poles in the region were forcibly relocated to Poland, whose national borders had shifted far to the west. The area of the former Polish voivoideship was expanded by adding territory in the north, though the western-most parts were transferred to the Lviv oblast. After 1945 Soviet authorities also encouraged ethnic Russians to settle in territories newly annexed to the Soviet Union, including the Ternopil oblast, though western Ukraine remained considerably less Russian than eastern Ukraine.

As Ukraine achieved independence in the 1990s, western Ukraine remained the heartland of Ukrainian political and cultural nationalism, and the political affiliations of Ternopil voters reflected that viewpoint. In the first elections after independence, the People's Movement of Ukraine was the leading party in the oblast. A majority of oblast voters supported the Ukrainian nationalist-oriented Electoral Bloc Yuliya Tymoshenko in the Ukrainian parliamentary election, 2002. Over 88% of voters supported Yulia Tymoshenko of the All-Ukrainian Union "Fatherland" in the Ukrainian presidential election, 2010.

By 2005, the population of the oblast had grown to roughly 225,000, consisting primarily of ethnic Ukrainians with a large Russian or Russian-speaking minority. The city of Ternopil has important institutions of higher education, including two teacher's colleges, an international medical school with instruction in English, and one of three economics institutes in Ukraine.

The religion of the majority is Eastern Rite Catholic (Uniate), though there is a notable Orthodox presence and a small Protestant minority. Many churches which were closed or destroyed under Soviet rule have rebuilt since independence. The local Jewish community, which was very large before 1939, was not reestablished after 1945. There are no active synagogues in the oblast and only a few isolated individuals affiliating with the Jewish faith.

Vyshnivets Palace
File:Dzhurin.jpg
Dzhuryn Waterfall, one of the highest in Ukraine.

The oblast is known for its castles and fortresses. Alas, due to underfunded state program in preservation of the cultural heritage, many of objects of historical significance are in a poor conditions. The following historic-cultural sites were nominated for the Seven Wonders of Ukraine.

The population is predominantly Ukrainophone and about 98% consider themselves Ukrainians. Among the biggest minorities are Poles and Russians who combine 1.6% of the total population. Most of the population is bilingual and the Russian language is accepted in daily communications. The estimated population is 1.1 million people (as of 2004).

In historical comparison, it should be noted that before the World War II national composition was very different and according to the 1931 Polish Census Ukrainians were a slight majority in the Tarnopol Voivodeship at 54.8%, while there was almost no Russians. On the other hand the Polish and Jewish population decreased drastically from 36.6% and 8.4% respectfully. 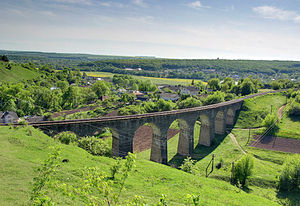 The economy is predominantly agriculturally oriented. Among industries, there is a well developed food industry particularly sugar production, alcohol, and dairy (such as butter). There is also number of factories such as "Vatra" (lighting equipment), Ternopil Harvester Plant, "Orion" (radio communication) among a few.

Ternopil Oblast has an adequate network of highways, while the city of Ternopil is located at the intersection of main European corridors along the E50 and E85 highways. There is a small airport in Ternopil (Ternopil Airport) which however mostly is used for charter flights. There is a well developed railroad network which is a part of the Lviv Railways. Water transportation is very limited and mostly along the Dniester River.

The Ternopil Oblast is administratively subdivided into 17 raions (districts), as well as 1 city (municipality) which is directly subordinate to the oblast government: Ternopil, the administrative center of the oblast. The average area of a raion is around 808 km2 (312 sq mi), the biggest one is Terebovlia Raion covering 1,130 km2 (440 sq mi) and the smallest one - Pidhaitsi Raion with 496 km2 (192 sq mi). The average population number is around 50.6 thousands which is just below the national average. 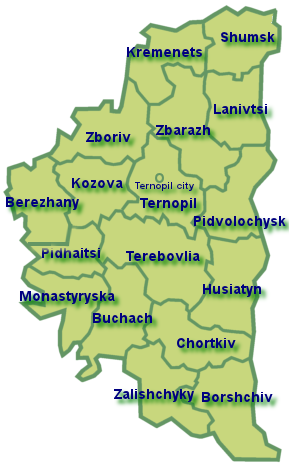 Most of Ukraine's oblasts are named after their capital cities, officially referred to as "oblast centers" (Ukrainian: обласний центр, translit. oblasnyi tsentr). The name of each oblast is a relative adjective, formed by adding a feminine suffix to the name of respective center city: Ternopil is the center of the Ternopil’s’ka oblast’ (Ternopil Oblast). Most oblasts are also sometimes referred to in a feminine noun form, following the convention of traditional regional place names, ending with the suffix "-shchyna", as is the case with the Ternopil Oblast, Ternopilshchyna.