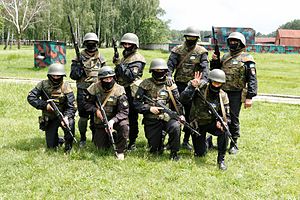 Territorial defence battalions (Ukrainian: Батальйо́ни територіа́льної оборо́ни) are volunteer military units of the Armed Forces of Ukraine under the command of the Ukrainian Ministry of Defence in 2014-2015. The battalions established themselves in mid-2014, during the early stages of the War in Donbass, to combat the stealth invasion by Russian Armed Forces[1][2][3] and the forces of the Donetsk People's Republic, Lugansk People's Republic, and the United Armed Forces of Novorossiya. More than fifty battalions have been formed, with up to 7,000 soldiers, the Azov and Donbass battalions are by far the largest with a strength of 1,000 and 900 soldiers respectively plus an extensive civilian support network.[4][5][6]Some units are accused of links to the far-right, and Amnesty International has reported some for human rights violations.[clarification needed][7] According to official figures, by mid-April 2016 205 members of the defence battalions had been killed.[8]

During the opening stages of the war in Eastern Ukraine, the Ukrainian military and police forces were largely ineffective in separatist areas, often surrendering equipment or being overwhelmed in cities by large crowds of civilians. Federalist and pro-Russian insurgents quickly gained large swaths of territory. Ukraine also lost control of the Ukrainian-Russian border and this allowed time for a large inflow of insurgents and military supplies from Russia.

Due to this ineffectiveness, in May 2014[20] volunteer militias began to form in order to combat the separatist insurgency. These groups designated themselves as territorial defence battalions and generally took their name from wherever most of their recruits were from.

The Russian Communist Party has pushed to label the battalions as terrorist organizations, even though they are directly subordinate to the Government of Ukraine and are legal government agencies of Ukraine.[31] Russian politicians have not pushed for declaring pro=Russian insurgents fighting in Ukraine as terrorists.

Foreign fighters mainly from Belarus, Georgia and Russia (about 100 men from each country) have joined the volunteer battalions.[36] They were joined by fighters from the United States, France, Germany, Norway, Sweden, Georgia, Poland, Spain, the Czech Republic, the United Kingdom, Croatia, Italy and Canada.[36]

By late 2014 the number of battalions raised had grown over 50, including those now under National Guard command.[6]

According to Interior Minster Avakov, by mid-April 2016 205 members of the defence battalions had been killed in action.[8]

Difference from other special forces units of Ukraine

The various territorial defence battalions are not to be confused with the units such as "Omega", "Jaguar", or "Bars" which are special forces units of Ukraine. While the aforementioned units are all regular forces of the Interior Ministry of Ukraine, territorial defence battalions formed from various volunteers who wished to resist Russian occupation of Ukraine, volunteers weren't required to have prior military training to join and therefore at the beginning of the conflict they had minimal time to train and equip themselves. Battalions were also not armed with armour or tanks at the start of the conflict, however some have units managed to capture and repair heavy equipment from enemy units.[37]

The battalions receive basic resources and weapons from the Interior Ministry or the Ministry of Defence.[20] These resources soon proved to be inadequate and numerous groups have helped to equip the battalions.[20] The best known volunteer groups are Self-defence of Maidan, which has its own warehouses in Melitopol, Dnipropetrovsk and Kharkiv, and Army SOS, an initiative of former Euromaidan activists. Volunteers provide things like: hygiene items, food, sleeping bags, night vision goggles and multicopters (for use as drones).[20]

The 5th Territorial Defence Battalion "Prykarpattya" subordinated to the Ministry of Defence.

An all volunteer unit largely composed of members from the Transcarpathian region of Ukraine and cities of Ivano-Frankivsk and Uzhhorod numbering around 500 people. Unlike other volunteer battalions the unit's main mission is to keep peace in its home region and not anti-terror operations. The unit's main mission is to protect critical facilities, ensure communication, guard the state border, and assist public and military authorities in western Ukraine. Zakarpattia Oblast is the least populated region of Ukraine, therefore deploying troops away from the area would leave it understaffed, the battalion is meant to assist authorities while regular police and military troops are deployed.[40]

The unit was eventually deployed to the War in Donbass and played an infamous role in the Battle of Ilovaisk. The battle began on 7 August 2014 and Ukraine's forces entered the city of Ilovaisk on 18 August 2014. The Prykarpattya Battalion did not take part in direct assault but was charged with holding the flank of the main component of Ukraine's troops. However, about 2,000 separatist reinforcements backed by Russian forces crossed from the Russian border to encircle Ukraine's troops in Ilvaisk. Almost all of the unit's 500 troops abandoned their post once they started coming under Russian fire leaving Russian forces free to encircle Ukrainian troops. Several soldiers later regrouped with other units, but it is reported that 326 soldiers of the battalion fled the war zone along with their equipment. The commanders of the battalion are facing treason and desertion charges in the aftermath of the incident.[41]

Named after the Sea of Azov the unit was created in Mariupol which is a major coastal city and operates as the capital of Donetsk Oblast due to the occupations of Donetsk by insurgents. The unit was one of the first battalions to form and begin to resist the rebels playing a large role in the defence of Mariupol.[42] The battalion is mostly composed of Russian speaking volunteers from Eastern Ukraine and is headed by Andriy Biletsky.

The unit is known for far right agenda and has been reported as displaying Nazi symbols.The unit denies the allegation that they use Nazi symbols claiming that their logo is based on the Coat of Arms of Ukraine[43] while elements of the national flag are also used.

It was upgraded into a full regiment in 2015, and is the only one with foreign soldiers in their ranks. It is also the NG's only territorial defence regiment in service.

Semen Semenchenko, the leader and founder of the Donbas battalion wearing his trademark balaclava.

The most well known and first volunteer battalion to form to resist Russian insurgents in the Donbass, often referred to as the "little black men" as an analog to Crimea's Little green men. The unit was conceived and is headed by Semen Semenchenko, an ethnic Russian. It formed from local ethnic Russian volunteers of the Donbass region who disagreed with the separatist philosophy and wished to remain part of Ukraine but were dissatisfied with the inaction of Ukrainian government forces in the area. In effect it is an analog of the separatist formed Vostok Battalion which formed from ethnic Russians fighting for separatism.

Since its formation the unit became much more diverse accepting volunteers from all over Ukraine and foreign nations into their ranks, however ethnic Russians still make up the majority of the unit. The unit is one of the largest volunteer battalions in Ukraine with nearly 1,000 members and has participated in most major battles since the start of the War in Donbass.[44] The unit also aided in the defence of Mariupol when Russian forces invaded through Novoazovsk, the battalion sent several tank destroyers to slow the Russian advance. The offensive toward Mariupol was halted near Shyrokyne and Bezimenne.[45] The unit suffered heavy losses when Russia sent its regular forces into Ukraine in late August, encircling parts of Ukrainian forces by taking their flank as they were battling separatists.[46]

In September 2014 the unit was reorganized into a Regiment the bulk of which consisted of a 700-man Battalion Tactical Group. The Ministry of Defence stated that the unit would be armed with tanks and armored personnel carriers. A Spetsnaz unit within the battalion was also formed.[47] The unit has been re-designated as the 3rd Reserve Battalion of the National Guard of Ukraine after being integrated into regular forces, but the Spetsnaz company remained.

Semen Semenchenko, the founder of the battalion, was elected to the parliament of Ukraine in October 2014 as part of the Samopomich party. It is unclear what will happen to the unit or who will be the new commander with Semenchenko being elected.[48] 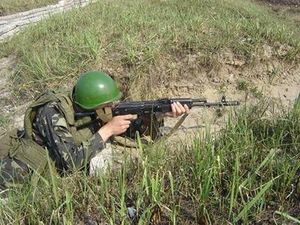 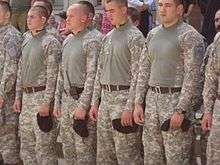 New recruits of the Poltava Battalion during their oath taking ceremony.

According to New York Times, there are three volunteer Islamic battalions fighting for the Ukrainian side.[72]

Dzhokhar Dudayev Battalion, originally named "Chechen battalion", it was set up in March 2014. It was later named after Chechnya’s first president and insurgent leader Dzhokhar Dudayev and it is based in Novomoskovsk in Dnipropetrovsk Oblast.[73] As of late May 2015, the unit is in the process of being legalized as part of the Ukrainian Interior Ministry.[73] Its Ukrainian members will join the Zoloti Borota Battalion, while its foreign members are expected to join army units under a bill enabling foreign fighters to get Ukrainian citizenship.[73] Most of the members are ethnic Ukrainians, but there are also Chechens from European countries as well as from Chechnya and it also includes other Muslims like Azeris, Ingush and Tatars, as well as Georgians.[73] The battalion "views the war as part of a broader struggle against Russian imperialism and the Kadyrov regime".[74] The battalion specializes in subversion and countering the subversive groups.[73]

Another Chechen battalion, named after Shah Mansur, has been reported defending the front line near Mariupol in 2015.[75] It was created by former Dzhokhar Dudayev Battalion members.[73]

The Noman Çelebicihan Battalion is a battalion of Crimean Tatars based in Kherson region bordering Crimea.[76] The battalion reportedly received assistance from Turkey.[77]

On 1 September 2014 NGOs involved in the Euromaidan-protests announced their intention to create its own territorial battalion subordinated to the Ministry of Defence of Ukraine.[78] This announcement was made at a meeting of representatives of "Ukrainian Coordinating Council Maidan", that included representatives of Automaidan and Right Sector.[78]

Formed from volunteers in the Donbass area the unit derives its name from the numerous mines in the area as well as the Donetsk area's football club. The unit had its oath taking ceremony on 8 July 2014 and began actively resisting Russian separatists in the area. The unit has approximately 700 members.[80][81]

Battalion of "Organization of Ukrainian Nationalists" was operating in the area of Pisky, Donetsk.[82]