The Texas Military Forces is the three-branch military of the U.S. state of Texas. It is composed of the Texas Army National Guard, the Texas Air National Guard, and the Texas State Guard. All three branches are administered by the state adjutant general, an appointee of the Texas governor, and fall under the command of the governor.[1] (The Army and Air National Guards are under the command of the Governor, unless the President of the United States activates the Guard into federal service by executive order. As for the Texas State Guard, the governor of Texas has sole control over this force.

The Texas military was first established by Stephen F. Austin on February 18, 1823, under the authorization of the emperor of Mexico, Agustín de Iturbide, who directed Austin "to organize the colonists into a body of the national militia, to preserve tranquility," as well as to make war on Indian tribes who were hostile to newly established Texas settlements. All of the Texan militias would come under the command of Sam Houston during the Texas War of Independence between Texas and Mexico beginning in 1835 and ending in 1836 after Texas secured its independence to become the new nation of the Republic of Texas.

The Texas National Guard consists of the Joint Force Headquarters for Texas (JFHQ-TX), the Texas Army National Guard, the Texas Air National Guard and the Domestic Operations Command (DOMOPS). The Guard is administered by the adjutant general, an appointee of the governor of Texas. The Constitution of the United States specifically charges the National Guard with dual federal and state missions. Those functions range from limited actions during non-emergency situations to full scale law enforcement of martial law when local law enforcement officials can no longer maintain civil control.

The National Guard may be called into federal service in response to a call by the President or Congress.[2]

When National Guard troops are called to federal service, the President serves as Commander-in-Chief.[3] The federal mission assigned to the National Guard is: "To provide properly trained and equipped units for prompt mobilization for war, National emergency or as otherwise needed."

The state defense force, the Texas State Guard is a military entity authorized by both the State Code of Texas,[4] U.S. Code[5] and executive order. Additionally, the U.S. Constitution grants the states the right to organize a state militia.[6] The Texas State Guard (TXSG) is the state's authorized militia and assumes the state mission of the Texas National Guard in the event the Guard is mobilized. The TXSG is partly composed of retired and former active, guard and reserve military personnel. Other members include those with no prior military service plus selected professional persons who volunteer their time and talents in further service to Texas.

The current adjutant general for the Texas National Guard is Major General John F. Nichols. He is the 51st Adjutant General for the State of Texas. 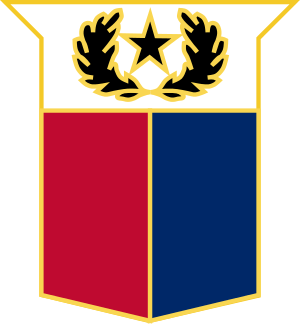 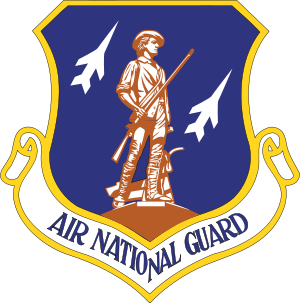 The Texas Air National Guard is composed of the 149th Fighter Wing, the 136th Airlift Wing, the 147th Reconnaissance Wing, the 254th Combat Communications Group, the 272nd Engineering Installation Squadron, and the 204th Security Forces Squadron. The 149th Fighter Wing prepares pilots for combat, the 136th Airlift Wing flies C-130s in-and out of theater and the 147th Reconnaissance Wing has recently acquired Predators to be the eyes in the hostile sky.

The 136th Airlift Wing in Fort Worth flies C-130 cargo aircraft carrying personnel and equipment around the world. The 531st Air Force Band is co-located with the 136th Airlift Wing. The 147th Reconnaissance Wing, headquartered in Houston on the Ellington Field Joint Reserve Base, provides a worldwide deployable dual-role fighter/attack capability while covering the Gulf Coast from Brownsville, Texas to New Orleans, Louisiana in the Air Sovereignty Alert mission.

The 149th Fighter Wing is headquartered in San Antonio on Lackland Air Force Base. The fighter wing is assigned to the US Air Forces Air Education and Training Command and is one of the primary "school houses" for F-16 pilots. The 182nd Fighter Squadron is attached to the 149th Fighter Wing. The Squadron flies the Block 30 F-16C/D Fighting Falcon dual-role fighter.

The 204th Security Forces Squadron is located at Biggs Army Airfield, Fort Bliss, El Paso. They are the only security forces unit in the Air National Guard. Since September 11, 2001 attacks, members of the 204th SFS have seen duty in central and southwest Asia, in Africa and onboard ship in the Persian Gulf. They have served on installations in several states in the U.S. and taught military base defense in Latin American countries. The unit still has members serving in the Iraq area of operations as part of Aerospace Expeditionary Forces.

The 254th Combat Communications Group, located at Hensley Field in Dallas since 20 Sept. 2010, provides worldwide command, control, communications and computer (C4) systems, information management and combat support. The 254th's primary mission is to provide planning and engineering for Combat Communications Squadrons that provide tactical (high-frequency radio, telephone, satellite and network) communications and terminal air traffic control services to support emergency U.S. Air Force requirements. The 254th provides a staff element for management of communications personnel and equipment when deployed in support of Air Force missions worldwide in locations where these capabilities don't exist, and are prepared to do so under hostile conditions and during peacetime as well.

The 6th WMD Civil Support Team was one of the first of 57 teams that are spread across the United States of America that is tasked with immediate, less than 4 hour response to any chemical, biological, and/or radiological incident. The 22-man joint Army/Air Guard team can self-sustain for 72 hours of continuous operation and is constantly training to stay on top of the technology and techniques for sampling, evidence collection, identification, and education of the possibilities that the team may be alerted for.

The team members initially sign-on to the team through the Active Guard Reserve (AGR) program for three years. Through this time, each member goes to Civil Support Skills Course at Fort Leonard Wood, MO, and many advanced WMD detection, sampling and laboratory courses. 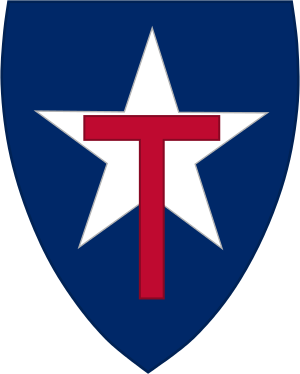 The Texas State Guard is a state defense force that assists and augments Texas military and civil authorities in times of state emergencies, and in on-going support of National Guard units and local communities. The Texas State Guard consists of six Civil Affairs Regiments, two Air Wings, a Medical Reserve Brigade ("The Medical Rangers"), and a Maritime Regiment.

Texas State Guard personnel actively support the state in the event of catastrophic events, and ongoing military missions. Members receive duty pay when activated by the Governor and placed on paid state active duty, and starting in 2008, for a limited number of mandatory training days. At this time duty pay is an honorarium of $123 per day, regardless of rank. Other service is not compensated.

The organizational structure follows the active military component structure, with comparable positions, ranks, protocols, and authorities. Members wear the Texas military uniform according to branch of service (in accordance with branch regulations) in regards to state military forces when conducting activities while on duty. TXSG personnel are also eligible for the same military awards and decorations as members of the Texas Army & Air National Guard. For example, deployed members of the Texas State Guard received the Governor's Unit Citation for Hurricane Katrina and Rita relief in 2005. The Texas military uniform worn by most of the Texas State Guard is similar to US Army's "ACU" military uniforms, though with different markings; the Maritime Regiment's uniform is similar to the Marine's MARPAT Digital Desert uniform.

The Texas State Guard is composed of many retired and former active, guard and reserve military personnel as well as non-prior service civilians who volunteer their time and talents in further service to their state. All are eligible to wear the Texas State Guard uniform once their application is approved and they are formally sworn in. Non-prior service State Guardsmen (and women) are required to attend a Military Basic Orientation Training during Annual Training as well as ongoing military training at monthly drills. Texas State Guard is an unarmed force, though a number of members compete against National and Active Army in shooting qualifications & competitions.

These forces are federally recognized, but are separate from the National Guard and can not be federalized, but rather serve the state exclusively. Article 3, Section 5 of the Texas constitution "mandates that the governor shall be the commander-in-chief of the Army and Navy of this state, and of the Militia, except when they shall be called into the service of the United States. But the Militia shall not be called into service except in case of rebellion or invasion, and then only when the General Assembly shall declare, by law, that the public safety requires it."[7]