The 2006 Texas gubernatorial election was held on November 7, 2006 elect the Governor of Texas. The election was a rare four-way race, with incumbent Republican Governor Rick Perry running for reelection against Democrat Chris Bell and Independents Carole Keeton Strayhorn and Kinky Friedman. Perry was reelected to a second full term in office, winning 39% of the vote to Bell's 30%, Strayhorn's 18% and Friedman's 12%.

Perry was inaugurated for a second full four-year term on January 16, 2007. The ceremony was held inside the House of Representatives chamber at the Texas Capitol after thunderstorms cancelled the planned outdoor ceremony.

It is difficult for an independent gubernatorial candidate to gain ballot access in the state of Texas. The election law, summarized briefly, requires the following:

In the event a candidate does not qualify for independent status, they may still run as a write-in candidate. The candidate must pay a $3,750 filing fee and submit 5,000 qualified signatures. However, the filing cannot take place any earlier than July 30, nor later than 5:00 PM on August 29.

Incumbent Rick Perry became governor in late 2000 when then-Governor George W. Bush resigned following his election as President of the United States. He had been elected lieutenant governor in 1998. Perry was subsequently elected Governor in his own right in 2002 and successfully ran for a second full term in 2006.

Perry's overall poll ratings had plummeted since the 2002 election, plagued by budget woes, battles over school financing reform, and a contentious and controversial redistricting battle. His approval rating dropped to 38% during the latter part of the 2005 legislative session. Perry then improved from this position, more recently holding a 44% approval rating, with 51% disapproving, as of a September 2006 poll.[3] Texas election laws do not require a run-off in the event that a majority is not achieved, and so Governor Perry joined only two other Texas governors to achieve the office by a plurality of less than 40%. The Texas Governor Elections of 1853 and 1861 both won with less than 40% of the vote.[citation needed]

Despite weak polling numbers, Perry had the support of the Texas GOP. According to Perry's campaign website, he gained 142 separate endorsements. Perry had endorsements from virtually the entire Texas GOP Congressional delegation (all but two members),[citation needed] every other Republican statewide officeholder (except Strayhorn and judicial officeholders; the latter by law cannot endorse political candidates), 51 of the 62 members of the Texas Republican Party executive committee, and nearly every major Texas pro-business, fiscal conservative, and social conservative organization and PAC. Perry even managed to gain the endorsement of the Teamsters Union,[citation needed] notwithstanding Texas's strong right to work laws. 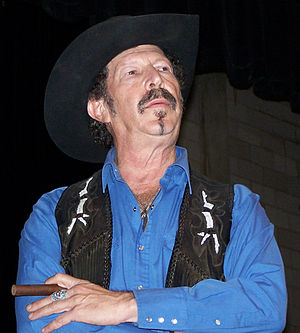 Kinky Friedman contemplates a question from the audience at a campaign rally in Bastrop, Texas.

Kinky Friedman, an independent candidate, gained a good amount of popular support among Texas voters. He claimed that country-music lovers, college students, animal lovers, ranchers, and anyone who didn't vote in the last election were among his supporters.[citation needed]

Friedman briefly enjoyed a high standing in the polls, and surpassed Democrat Chris Bell by Independence Day.[citation needed] As Election Day drew near, his campaign fizzled out as much of his wide support was among young voters. He finished fourth in the election with under 13% of the vote. His website claimed that "he doesn't put much stock in unscientific political polls among "likely" voters, saying, "It's Kinky Friedman versus apathy". Friedman stated during that the campaign that he was going after the 71% who didn't make it to the polls in 2002.[citation needed]

Chris Bell, a former Congressman from Houston, filed an ethics complaint against former House Majority Leader Tom DeLay as a lame duck who had been defeated in his party's primary after the controversial mid-decade redistricting in the state.[citation needed] Bell announced his run in July 2005.[citation needed]

Bell's official strategy was to get Democrats to unite behind and vote for a Democrat, predicting (and betting on) a splintering of the Republican vote among Perry, Strayhorn, and Friedman, giving the Democrats the needed plurality to win the election.[4] Running on a platform of ethics reform and education issues, he stayed with the pack of three candidates with better name recognition. After a good debate performance, his poll numbers improved significantly to where he had taken second place in nearly every poll afterward.

Carole Keeton Strayhorn, the Comptroller of Public Accounts, was initially pegged as running in a potentially contentious three-way Republican primary battle with bitter rival Governor Perry and U.S. Senator Kay Bailey Hutchison. Hutchison declined to run for governor in late 2005, instead opting to run for re-election to the Senate. This left Strayhorn and Perry vying for the GOP nomination. Believing her chances to be better running as an independent and appealing directly to voters, rather than those of the Republican Party first, she announced her intent to challenge him in the general election instead. Had she run in the primary, the December 2005 Scripps Howard Texas Poll of match ups had Perry in the lead against Strayhorn by a 55%-24% margin.

Strayhorn was seen as a moderate alternative to Perry, and found support among moderate Republicans and independent voters. Although a few polls had her tied for second going into Election day, she finished with 18.13%[5] of the vote, 12% behind Bell and 21% behind Perry.

James Werner was the Libertarian Party candidate. According to Werner's campaign website, he has a master's degree in Spanish and Latin American literature from the University of California, a bachelor's degree from Vanderbilt University and is currently working for an Austin-based educational software company.

James "Patriot" Dillon was the only announced write-in candidate, according to information from the Texas Secretary of State's office.[6][7]

* denotes polling result winner is within the margin of error

** denotes data was not reported by the pollster

Percent change available only for parties that participated in the 2002 Texas gubernatorial election.