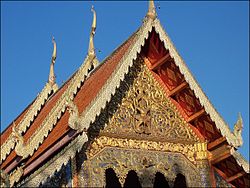 Buddhist temples in Thailand are known as "wats", from the Pāḷi vāṭa, meaning an enclosure. A temple has an enclosing wall that divides it from the secular world. 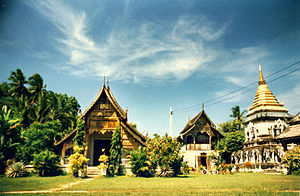 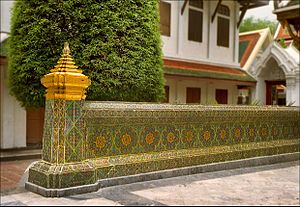 Wat architecture has seen many changes in Thailand in the course of history. Although there are many differences in layout and style, they all adhere to the same principles.

A Thai temple, with few exceptions, consists of two parts: the Phutthawat and the Sangkhawat.

The Phutthawat (Thai: พุทธาวาส) is the area which is dedicated to Buddha. It generally contains several buildings:

The buildings are often adorned with elements such as chofas.

In temples of the Rattanakosin era, such as Wat Pho and Wat Ratchabophit, the ubosot can be contained within a (low) inner wall called a Kamphaeng Kaeo (Thai: กำแพงแก้ว), which translates to "crystal wall".

The sangkhawat (Thai: สังฆาวาส) contains the living quarters of the monks. It also lies within the wall surrounding the whole temple compound. The sangkhawat area can have the following buildings:

Multiple roof tiers are important element of the Thai temple. The use of ornamented multiple tiers is reserved for roofs on temples, palaces and important public buildings. Two or three tiers are most often used, but some royal temples have four. The use of multiple roof tiers is more aesthetic than functional. Because temple halls are large,their roof areas are massive.To lighten up the roof's appearance, the lowest tier is the largest, with a smaller middle layer and the smallest roof on top. Multiple breaks in each roof lighten it further – a double-tiered roof might have 2-4 breaks in each tier. Dynamic visual rhythms are created by these multiple tiers, breaks and tier patterns. In northern temples, the roof area is larger, sweeping low towards the ground to cover more of the wall. The lower tiers telescope farther to the entrance.In central Thai temple, the lower tiers telescope just a short distance beyond the top roof at the gable ends.

Most decorations are attached to the bargeboard, the long, thin panel on the edge of the roof at the gable ends.The decorative structure is called the lamyong. The lamyong is sculpted in an undulating, serpentine nag sadung shape evoking the nāga. Its blade-like projection called bai raka suggest both naga fins and the feathers of Garuda. Its lower finial is called a hang hong, which usually takes the form of a naga's head turned up and facing away from the roof. The naga head may be styled in flame-like kranok motifs and may have multiple heads. A roof with multiple breaks or tiers has identical hang hong finials at the bottom of each section. Perched on the peak of the lamyong is the large curving ornament called a chofah, which resembles the beak of a bird, perhaps representing Garuda.

During the 10th century, Thai Theravada Buddhism and Hindu cultures merged, and Hindu elements were introduced into Thai iconography. Popular figures include the four-armed figure of Vishnu; the garuda (half man, half bird); the eight-armed Shiva; elephant-headed Ganesh; the nāga, which appears as a snake, dragon or cobra; and the ghost-banishing giant Yaksha. 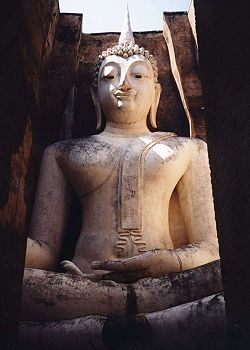 Depictions of the Buddha