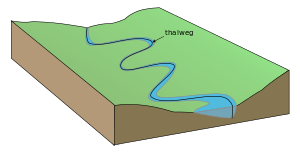 In geography and fluvial geomorphology, a thalweg or talweg (/ˈtɑːlvɛɡ/) is the line of lowest elevation within a valley or watercourse.[1] Under international law, thalwegs can acquire special significance because disputed river borders are often deemed to run along the river's thalweg.

The word thalweg is of 19th-century German origin. The German word Thalweg (modern spelling Talweg) is a compound noun that is built from the German elements Thal (since Duden's orthography reform of 1901 written Tal) meaning valley, and Weg, meaning way. It literally means "valley way" and is used, with its modern spelling "Talweg," in daily German to describe a path or road that follows the bottom of a valley, or in geography with the more technical meaning also adopted by English.

In hydrological and fluvial landforms, the thalweg is a line drawn to join the lowest points along the entire length of a stream bed or valley in its downward slope, defining its deepest channel. The thalweg thus marks the natural direction (the profile) of a watercourse.

The term is also sometimes used to refer to a subterranean stream that percolates under the surface and in the same general direction as the surface stream.

The precise drawing of river boundaries has been important on countless occasions; notable examples include the Shatt al-Arab between Iraq and Iran, the Danube in central Europe, the Kasikili/Sedudu Island dispute between Namibia and Botswana, settled by the International Court of Justice in 1999,[4] and the 2004 dispute settlement under the UN Law of the Sea concerning the offshore boundary between Guyana and Suriname, in which the thalweg of the Courantyne River played a role in the ruling