Ṭhānissaro Bhikkhu, also known as Ajaan Geoff (born 1949), is an American Buddhist monk. Belonging to the Thai Forest Tradition, for 22 years he studied under the forest master Ajahn Fuang Jotiko (himself a student of Ajaan Lee). Since 1993 he has served as abbot of the Metta Forest Monastery in San Diego County, California.

Ṭhānissaro Bhikkhu is perhaps best known for his translations of the Dhammapada and the Sutta Pitaka - almost 1000 suttas in all - providing the majority of the sutta translations for the reference website Access to Insight,[1] as well as for his translations from the dhamma talks of the Thai forest ajahns. He has also authored several dhamma-related works of his own, and has compiled study-guides of his Pali translations.[2] 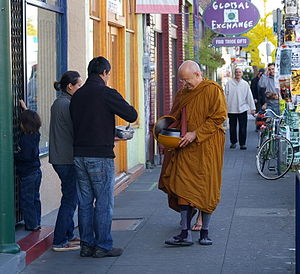 Ṭhānissaro Bhikkhu was born Geoffrey DeGraff in 1949 and was introduced to the Buddha's teaching on the Four Noble Truths as a high schooler, during a plane ride from the Philippines.[2] After graduating in 1971 with a degree in European Intellectual History from Oberlin College, he travelled to Thailand, where he practiced meditation under Ajaan Fuang Jotiko, who had studied under Ajaan Lee. He was ordained in 1976 at Ajaan Lee's Wat Asokaram, where Ajaan Lee's nephew, Phra Rajvarakhun (Samrong Gunavuddho), served as preceptor for his ordination. Later, he took residence at Wat Dhammasathit in Thailand, where he continued studying under Ajaan Fuang.[3]

Before Ajaan Fuang's death in 1986, he expressed his wish for Ajaan Geoff to become abbot of Wat Dhammasathit. Some time after his teacher's death, Ajaan Geoff was offered the position of abbot, but with "strings... attached" and no authority since he was a Westerner in a monastery founded by and for Thai monks. Instead of taking that position, he travelled to San Diego County in 1991, upon request of Ajaan Suwat Suvaco, where he helped start Metta Forest Monastery.[2] He became abbot of the monastery in 1993.[3] In 1995, Ajaan Geoff became the first American-born, non-Thai bhikkhu to be given the title, authority, and responsibility of Preceptor (Upajjhaya) in the Dhammayut Order. He also serves as Treasurer of that order in the United States.

In 2009, Ajaan Geoff replied to another senior buddhist monk with a letter containing interpretations on the Vinaya questioning the validity of a recent bhikkhuni ordination.[4] The letter was met with dispute by nuns and monks such as Ayya Tathaaloka, Bhikkhu Bodhi, Ayya Sudhamma Bhikkhuni, Ajahn Brahm and Ajahn Sujato.[5]

Aside from Buddhist Religions, all of the books and articles mentioned above are available for free distribution; many are online. Audio recordings of Dhamma talks are also given freely.