The Art of Being Right

The Art of Being Right: 38 Ways to Win an Argument (Eristische Dialektik: Die Kunst, Recht zu behalten; 1831) is an acidulous and sarcastic treatise written by the German philosopher Arthur Schopenhauer in sarcastic deadpan.[1] In it, Schopenhauer examines a total of thirty-eight methods of showing up one's opponent in a debate. He introduces his essay with the idea that philosophers have concentrated in ample measure on the rules of logic, but have not (especially since the time of Immanuel Kant) engaged with the darker art of the dialectic, of controversy. Whereas the purpose of logic is classically said to be a method of arriving at the truth, dialectic, says Schopenhauer, "...on the other hand, would treat of the intercourse between two rational beings who, because they are rational, ought to think in common, but who, as soon as they cease to agree like two clocks keeping exactly the same time, create a disputation, or intellectual contest." 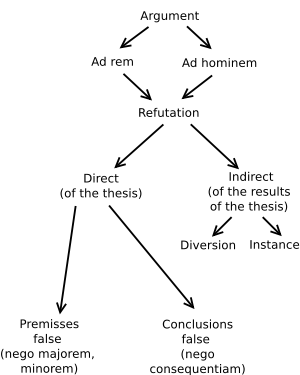 Basis of all dialectic, according to Schopenhauer

In Volume 2, § 26, of his Parerga and Paralipomena, Schopenhauer wrote:

The tricks, dodges, and chicanery, to which they [men] resort in order to be right in the end, are so numerous and manifold and yet recur so regularly that some years ago I made them the subject of my own reflection and directed my attention to their purely formal element after I had perceived that, however varied the subjects of discussion and the persons taking part therein, the same identical tricks and dodges always come back and were very easy to recognize. This led me at the time to the idea of clearly separating the merely formal part of these tricks and dodges from the material and of displaying it, so to speak, as a neat anatomical specimen.

He "collected all the dishonest tricks so frequently occurring in argument and clearly presented each of them in its characteristic setting, illustrated by examples and given a name of its own." As an additional service, Schopenhauer "added a means to be used against them, as a kind of guard against these thrusts…."

However, when he later revised his book, he found "that such a detailed and minute consideration of the crooked ways and tricks that are used by common human nature to cover up its shortcomings is no longer suited to my temperament and so I lay it aside." He then recorded a few stratagems as specimens for anyone in the future who might care to write a similar essay. He also included, in Parerga and Paralipomena, Volume 2, § 26, an outline of what is essential to every disputation.

The Manuscript Remains left after Schopenhauer's death include a forty–six page section on "Eristic Dialectics". It contains thirty–eight stratagems and many footnotes. There is a preliminary discussion about the distinction between logic and dialectics. E. F. J. Payne has translated these notes into English.[2]

The following lists the 38 stratagems described by Schopenhauer, in the order of their appearance in the book: