From Infogalactic: the planetary knowledge core
(Redirected from The Bank of New York)
Jump to: navigation, search

The Bank of New York was a global financial services company established in 1784 by the American Founding Father Alexander Hamilton. It existed until its merger with the Mellon Financial Corporation on July 2, 2007.[1] The company now continues under the new name of The Bank of New York Mellon or BNY Mellon. 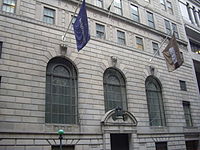 The Bank of New York was founded on June 9, 1784,[2] making it the oldest bank in the United States. Alexander Hamilton wrote the new bank's constitution, and became the individual most actively involved in the organization of The Bank of New York, guiding it through its early stages. The bank opened for business at the Walton House in Lower Manhattan only a few months after the departure of British troops from American soil. It opened with a capitalization of $500,000.[2] William Seton, future father-in-law of Saint Elizabeth Seton, was named director in 1786.[3]

To commemorate its 225th anniversary, BNY Mellon created a 5 part video series entitled "Looking Forward : The 225th Anniversary of The Bank of New York Mellon" which was narrated by historian Richard Brookhiser and recaps the company’s history from its founding in 1784. The segments are entitled: 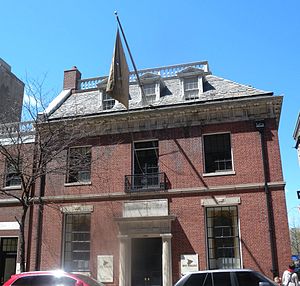 Talks of a merger began when Tom Renyi approached Robert Kelly about a possible amalgamation between the Bank of New York and Mellon Financial Corporation.[15] The US$16.5 billion deal was finalized on July 1, 2007, with Kelly as the Chief Executive Officer (CEO) of the new company, and Renyi as Executive Chairman.[15][16] Per the deal, the new Board of Directors is composed of ten directors appointed by the Bank of New York, and eight by Mellon.[17] The Bank of New York Mellon launched its new brand identity as on October 1, 2007.

In October, 2011, the Justice Department and New York's attorney general filed civil lawsuits against the Bank of New York, alleging foreign currency fraud. The suits hold that the bank deceived pension-fund clients by manipulating the prices assigned to them for foreign currency transactions. Allegedly, the bank selected the day's lowest rates for currency sales and highest rates for purchases, appropriating the difference as corporate profit. The scheme is said to have generated $2 billion for the bank, at the expense of millions of Americans' retirement funds, and to have transpired over more than a decade. Purportedly, the bank would offer secret pricing deals to clients who raised concerns, in order to avoid discovery. Bank of New York has defended itself vigorously, maintaining the fraud accusations are "flat out wrong" and warning that as the bank employs 8,700 employees in New York, any damage to the bank would have negative repercussions for the state of New York. [18] [19]