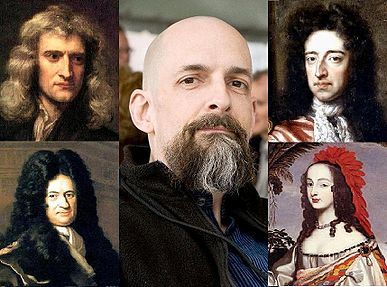 Neal Stephenson (center) makes use of historical figures as characters in The Baroque Cycle, such as (counterclockwise from upper left) Isaac Newton, Leibniz, Sophia of Hanover and William of Orange

The Baroque Cycle is a series of novels by American writer Neal Stephenson. It was published in three volumes containing 8 books in 2003 and 2004. The story follows the adventures of a sizeable cast of characters living amidst some of the central events of the late 17th and early 18th centuries in Europe. Despite featuring a literary treatment consistent with historical fiction, Stephenson has characterized the work as science fiction, because of the presence of some anomalous occurrences and the work's particular emphasis on themes relating to science and technology.[1] The sciences of cryptology and numismatics feature heavily in the series, as they do in some of Stephenson's other works.

The Baroque Cycle consists of several novels "lumped together into three volumes because it is more convenient from a publishing standpoint"; Stephenson felt calling the works a trilogy would be "bogus".[2]

Appearing in print in 2003 and 2004, the cycle contains eight books originally published in three volumes:

The books travel throughout Early Modern Europe between the Restoration Stuart Monarchy until the beginning of the 18th century. Though most of the focus is in Europe, the adventures of one character, Jack Shaftoe, do take him throughout the world, and the fledgling British colonies in North America are important to another (Daniel Waterhouse). Quicksilver takes place mainly in the years between the Restoration of the Stuart monarchy in England (1660) and the Glorious Revolution of 1688. The Confusion follows Quicksilver without temporal interruption, but ranges geographically from Europe and the Mediterranean through India to the Philippines, Japan, and Mexico. The System of the World takes place principally in London in 1714, about ten years after the events of The Confusion.

A central theme in the series is Europe's transformation away from feudal rule and control toward the rational, scientific, and more merit-based systems of government, finance, and social development that define what we now consider "western" and "modern."

Characters include Isaac Newton, Gottfried Leibniz, Nicolas Fatio de Duillier, and sundry other Europeans of note during the late 17th and early 18th centuries. Also, the books feature considerable sections concerning alchemy. The principal alchemist of the tale is the mysterious Enoch Root, who, along with the descendants of several characters in this series, is also featured in the Stephenson novel Cryptonomicon.

Neal Stephenson was inspired to write The Baroque Cycle when, while working on Cryptonomicon, he encountered a statement by George Dyson in Darwin Among the Machines that suggests Leibniz was "arguably the founder of symbolic logic and he worked with computing machines."[5] He also had heard considerable discussion of the Leibniz – Newton feud and Newton's work at the treasury during the last 30 years of his life,[5] and in particular the case against Leibniz as summed up in the Commercium Epistolicum of 1712 was a huge inspiration which went on to inform the project. He found "this information striking when [he] was already working on a book about money and a book about computers."[5] Further research into the period excited Stephenson and he embarked on writing the historical piece that became The Baroque Cycle.[5]

Historical figures who appear as characters

Robert Wiersem of The Toronto Star called The Baroque Cycle a "sublime, immersive, brain-throttlingly complex marvel of a novel that will keep scholars and critics occupied for the next 100 years".[6]