The Bloudy Tenent of Persecution for Cause of Conscience

From Infogalactic: the planetary knowledge core
(Redirected from The Bloody Tenent of Persecution for Cause of Conscience)
Jump to: navigation, search 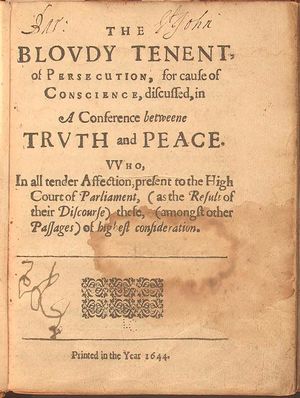 The Blood Tenent of Persecution, 1644

The Bloudy Tenent of Persecution, for Cause of Conscience, Discussed in a Conference between Truth and Peace is a 1644 book about government force written by Roger Williams, the founder of the American colony of Rhode Island and the co-founder of the First Baptist Church in America. Using biblical reasoning, the book argues for a "wall of separation" between church and state and for state toleration of various Christian denominations, including Catholicism, and also "paganish, Jewish, Turkish or anti-Christian consciences and worships."[1] Tenent is a now obsolete variant of the word tenet. The book takes the form of a dialogue between Truth and Peace and is a response to correspondence by Boston minister, John Cotton, regarding Cotton's support for state enforcement of religious uniformity in Massachusetts. Through his interpretation of the Bible, Williams argues that Christianity requires the existence of a separate civil authority that may not generally infringe upon liberty of conscience which Williams interpreted to be a God given right.[2]

The 1644 text is considered among Williams' best argued even though it was written under presumably rushed conditions and is stylistically difficult. Many of the original copies of The Bloudy Tenent were burned by order of a Parliamentary faction offended by Williams' view of government. Upon reading Williams' book, John Cotton responded defending his positions in a publication entitled, The Bloudy Tenent, Washed, and Made White in the Bloud of the Lamb. Upon his return to London in 1652, Williams again published a defense of his positions and responded to Cotton in The Bloudy Tenent Yet More Bloudy by Mr. Cotton's Endeavour to Wash it White in the Blood of the Lamb; of Whose Precious Blood, Spilt in the Bloud of his Servants; and of the Blood of Millions Spilt in Former and Later Wars for Conscience Sake, That Most Bloody Tenent of Persecution for Cause of Conscience, upon, a Second Tryal Is Found More Apparently and More Notoriously Guilty, etc. (London, 1652). The original Bloudy Tenent was later cited as a philosophical source for John Locke and the First Amendment to the United States Constitution and several writings of Thomas Jefferson regarding religious freedom.[3][4]

In the Bloudy Tenent and other writings, Williams interpreted many passages in the Old and New Testaments as limiting government interference in any religious matters (in line with contemporary Baptist interpretations), and therefore opposing the traditional Puritan exegesis, which supported using state force in some "religious" matters:[2]