The Four Feathers is a 1939 Technicolor adventure film directed by Zoltan Korda, starring John Clements, Ralph Richardson, June Duprez, and C. Aubrey Smith. Set during the reign of Queen Victoria, it tells the story of a man accused of cowardice. It is widely regarded as the best of the numerous film adaptations of the 1902 novel of the same name by A.E.W. Mason. 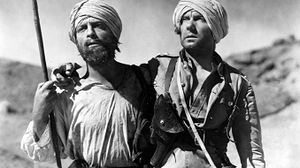 John Clements and Ralph Richardson in The Four Feathers

In 1895, the Royal North Surrey Regiment is called to active service to join the army of Sir Herbert Kitchener in the Mahdist War against the forces of The Khalifa (John Laurie). Forced into an army career by family tradition and fearful he might prove a coward in battle, Lieutenant Harry Faversham (John Clements) resigns his commission on the eve of its departure. As a result, his three friends and fellow officers, Captain John Durrance (Ralph Richardson) and Lieutenants Burroughs (Donald Gray) and Willoughby (Jack Allen), show their contempt of his perceived cowardice by each sending him a white feather attached to a calling card. When his fiancée, Ethne Burroughs (June Duprez), says nothing in his defence, he bitterly demands a fourth from her. She refuses, but he plucks one from her fan.

Harry confides in an old mentor and former surgeon in his father's regiment, Dr. Sutton (Frederick Culley), that he must attempt to make amends for his disgrace. He departs for Egypt. There, he adopts the disguise of a despised mute Sangali native, with the help of Dr. Harraz (Henry Oscar), to hide his lack of knowledge of the language.

During the army's advance, Durrance is ordered to take his company through the desert to lure the Khalifa's army away from Omdurman. Durrance is blinded by sunstroke before he can lead the company to safety and it is overrun and wiped out. He is left for dead on the battlefield, and Burroughs and Willoughby are captured. However, the disguised Faversham takes the delirious Durrance across the desert and down the Nile to the vicinity of a British fort. As he puts Durrance's white feather into a letter that Durrance kept with him, Harry is mistaken for a robber. Faversham is placed in a convict gang, but escapes to continue his quest.

Six months later, the blind Durrance has returned to England. Out of pity, Ethne agrees to marry him. At dinner with Ethne, her father, and Dr. Sutton, as Durrance is relating the tale of his miraculous rescue, the white feather drops out of his letter, revealing to the others that his rescuer was Harry Faversham. Nobody has the heart to tell Durrance.

Burroughs and Willoughby are thrown into a dungeon in Omdurman with other enemies of the Khalifa. Still playing the addled Sangali, Faversham surreptitiously gives them hope of escape and passes them a file, but arouses the suspicions of the guards. He is flogged and imprisoned with the others. He reveals his identity to his friends and organizes an escape during the coming attack of Kitchener's army. Faversham leads the other prisoners in overpowering their guards and seizing the Khalifa's arsenal.

Durrance learns of Faversham's deeds from a newspaper account read to him by Dr. Sutton. He dictates a letter to Ethne, releasing her from their engagement on the false pretext of going to Germany for a prolonged course of treatment to restore his eyesight. Some time later, Harry attends a dinner with his friends and Ethne, where General Burroughs (C. Aubrey Smith), Ethne's father, acknowledges that Harry has forced all to take back their feathers—except Ethne. He playfully makes her take back her white feather by interrupting the general, in the midst of his favourite war story about the Battle of Balaclava, to correct his embellishments; the irritated Burroughs complains that he will never be able to tell that story again.

The movie was mostly filmed on location in the Sudan in Technicolor.[1]

The 1st Battalion The East Surrey Regiment were used in period uniforms for scenes in which they withstood the Dervish advance en masse.

The Four Feathers, a novel written by A. E. W. Mason, has been adapted for film on numerous other occasions:

This version is widely considered the best of all the numerous film adaptations of the novel.[2][3][4] Critic Michael Sragow praises the "film's gritty magic", calling it "next to Lawrence of Arabia (1962), the most harrowingly beautiful of all desert spectaculars."[2] "They [the film crew] and the cast all do their jobs so well that the action becomes poetic."[2] The Time Out review cites its "superb Technicolor camerawork ... and solid performances all round."[4] It has a 100% freshness rating from Rotten Tomatoes.[5]

Georges Périnal and Osmond Borradaile were nominated for the Academy Award for Best Cinematography, Color.

The film was nominated for the Palme d'Or at the Cannes Film Festival and the Mussolini Cup at the Venice Film Festival.

It is available on DVD and Blu-ray from the Criterion Collection.