The Holocaust in France

From Infogalactic: the planetary knowledge core
Jump to: navigation, search
File:Recensement des Juifs.JPG
1941 poster from Marseilles announcing the order for Jews to register

The Holocaust in France refers to the persecution, deportation, and annihilation of Jews and Roma between 1940 and 1944 in occupied France and in Vichy-North Africa, during World War II. The persecution began in 1940, and culminated in deportations of Jews from France to death camps in Germany and Nazi-occupied Poland from 1942 which lasted until July 1944. Over 75,000 Jews were deported from France to death camps out of the 340,000 Jewish individuals in France in 1940. About 72,500 of these Jews were killed in the camps. The French Vichy government [1] and the French police participated in the roundup of Jews. Although most deported Jews died, the survival rate of the Jewish population in France was up to 75% which is one of the highest survival rates in Europe.[2][3]

France had a population of about 150,000 Jewish nationals during the Interwar period,[4] in addition France hosted a large population of foreign Jews who had fled persecutions in Germany. By 1939, the Jewish population had increased to 330,000 due to the refusal of the United States and the United Kingdom to accept any more Jewish refugees following the Évian Conference. After the occupation of Belgium and the Netherlands in 1940, France hosted a new wave of Jewish immigrants and Jewish population peaked at 340,000 individuals.[4]

At the declaration of World War II, French Jews were mobilized into the French military like their compatriots, and, like in 1914, a significant number of foreign Jews enlisted in regiments of foreign volunteers.[5] Jewish refugees from Germany were interned as enemy aliens. In general, the Jewish population of France was confident in the ability of France to defend them against the occupiers, but some, particularly from Alsace and the Moselle regions fled westwards into the unoccupied zone from July 1940.[6]

The armistice agreement of 22 June 1940, signed between the Third Reich and the government of Marshal Philippe Pétain did not contain any overtly anti-Jewish clauses, but did indicate that the Germans intended the racial order existent in Germany since 1933 to spread to Metropolitan France and its overseas territories:

Under the terms of the armistice only part of France was occupied; the Vichy government of Pétain controlled southern France, the departments of French Algeria, and France's overseas territories such as Vichy-Morocco, Vichy-Tunisia, Indochina, the Levant, etc.The Vichy regime saw its empire as an integral part of non-occupied France, and its anti-Jewish decrees were immediately implemented there, because of the Vichy vision of the empire as a territorial continuation of metropolitan France (The Holocaust – France, 1996 (568 p.) published by Yad Vashem. Yehuda Bauer, The Holocaust – A History. “The French possessions, including those in North Africa, were under Vichy government rule and all the anti-Jewish legislation was applied there.Ruth Ginio, French Colonialism Unmasked: The Vichy Years in French West Africa, Lincoln, NB–London, University of Nebraska Press, 2006. Art. 9.of the Statut of the Jews: The present law is applicable to Algeria, the colonies, country of protectorate and territories under mandate.).

From the Armistice to the invasion of the Zone libre 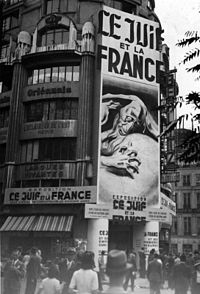 An anti-Semitic exhibition, entitled "The Jew and France", in Paris, 1941 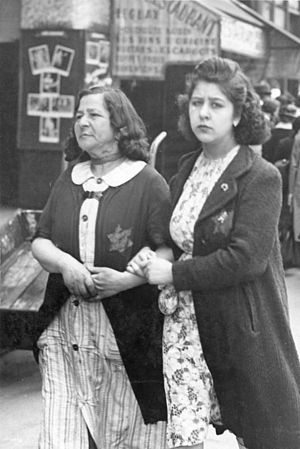 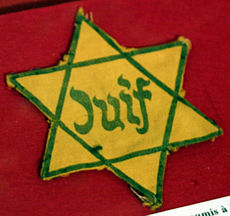 Yellow badge made mandatory by the Nazis in France

From the summer of 1940, Otto Abetz, the German ambassador in Paris, organized the expropriation of rich Jewish families.[7] The Vichy regime took the first anti-Jewish measures slightly after the German authorities in the autumn of 1940. The Statut des Juifs ("statute on Jews") of 3 October was prepared by Raphaël Alibert. According to a document made public in 2010, Pétain himself made slight moderations to the term of the law.[8] The statut forbade French Jews from working in certain professions (teachers, journalists, lawyers, etc.) while a Law of 4 October 1940 envisaged the incarceration of foreign Jews in internment camps in southern France such as the one at Gurs. These internees were joined by convoys of Jews deported from regions of France, including 6,500 Jews who had been deported from Alsace-Lorraine during Operation Bürckel.

During Operation Bürckel, Gauleiters Josef Bürckel and Robert Heinrich Wagner oversaw the expulsion of Jews into unoccupied France from their Gaues and the parts of Alsace-Lorraine that had been annexed in the summer of 1941 to the Reich.[9] Only those Jews in mixed marriages were not expelled.[9] The 6,500 Jews affected by Operation Bürckel were given at most two hours warning on the night of 22–23 October 1940, before being rounded up. The nine trains carrying the deported Jews crossed over into France "without any warning to the French authorities", who were not happy with receiving them.[9] The deportees had not been allowed to take any of their possessions with them, these being confiscated by the German authorities.[9] The German Foreign Minister Joachim von Ribbentrop treated the ensuing complaints by the Vichy government over the expulsions in a "most dilatory fashion".[9] As a result, the Jews expelled in Operation Bürckel were interned in harsh conditions by the Vichy authorities at the camps in Gurs, Rivesaltes and Les Milles while awaiting a chance to return them to Germany.[9]

The Commissariat Général aux Questions juives ("Commissariat-General for Jewish Affairs"), created by the Vichy State in March 1941, managed the seizure of Jewish assets and organized anti-Jewish propaganda.[10] At the same time, the Germans began compiling registers of Jews in the occupied zone. The Second Statut des Juifs of 2 June 1941 systematized this registrations across the country and in Vichy-North Africa. Because the yellow star-of-david badge was not made compulsory in the unoccupied zone, these records would provide the basis for the future round-ups and deportations. In the occupied zone, a German order enforced the wearing of the yellow star for all Jews aged over 6 on 29 May 1942.[11]

In order to more closely control the Jewish community, on 29 November 1941, the Germans created the Union Générale des Israélites de France (UGIF) in which all Jewish charitable works were subsumed. The Germans were thus able to learn where the local Jews lived. Many of the leaders of the UGIF were also deported, such as René-Raoul Lambert and André Baur.[12]

File:DrancyConcentrationCamp.jpg
The internment camp at Drancy, outside Paris, where Jews were confined until they were deported to the death camps.

The arrests of Jews in France began from 1940 for individuals, and general round ups began in 1941. The first raid (rafle) took place on 14 May 1941. The Jews arrested, all men and foreigners, were interned in the first transit campas at Pithiviers and Beaune-la-Rolande in the Loiret (3,747 men). The second round-up, between 20–1 August 1941, led to the arrest of 4,232 French and foreign Jews who were taken to Drancy internment camp.[13]

Deporations began on 27 March 1942, when the first convoy left Paris for Auschwitz.[14] Women and children were also targeted, for instance during the Vel' d'Hiv Roundup on 16–7 July 1942, in which 13,000 Jews were arrested by the French police. In the occupied zone, the French police was effectively controlled by the German authorities. They carried out the measures ordered by the Germans against Jews, and in 1942, delivered non-French Jews from internment camps to the Germans.[15] They also contributed to the sending of tens of thousands from those camps to extermination camps in Poland, via Drancy.[16]

From the invasion of the Zone libre to 1945 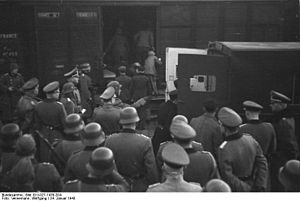 French Jews being deported from Marseilles, 1943

In November 1942, the whole of France came under direct German control, apart from a small sector occupied by Italy. In the Italian zone, Jews were generally spared persecution, until collapse of the Italian fascist regime led to the German occupation of all Italian territory in September 1943.[citation needed]

The German authorities took increasing charge of the persecution of Jews, while the Vichy authorities were forced towards a more sensitive approach by public opinion. However, the Milice, a French paramilitary force inspired by Nazi ideology, was heavily involved in rounding up Jews for deportation during this period. The frequency of German convoys increased. The last, from the camp at Drancy, left the Gare de Bobigny on 31 July 1944.[18]

Of the approximately 330,000 Jews in metropolitan France in 1939, 75% survived the Holocaust, which is one of the highest survival rates in Europe.[3] France has the third highest number of citizens who were awarded the Righteous Among the Nations, an award given to "non-Jews who acted according to the most noble principles of humanity by risking their lives to save Jews during the Holocaust".[20] About 75,000 Jews were deported to Nazi concentration camps and death camps and 72,500 of them died.[2]