The Holocaust in the Independent State of Croatia 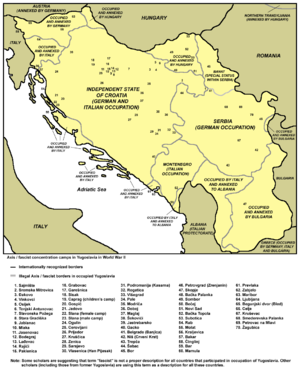 Concentration camps in the Independent State of Croatia on a map of all camps in Yugoslavia in World War II.

The Holocaust in the Independent State of Croatia refers to the genocide of Jews and other ethnic minorities during World War II within the Independent State of Croatia, a fascist puppet state ruled by the Ustaše regime, that included most of the territory of modern-day Croatia, the whole of modern-day Bosnia and Herzegovina and the eastern part of Syrmia (now in modern-day Serbia). Most of the Jews were exterminated in Ustaše-run concentration camps like Jasenovac and others, while a considerable number of Jews were rounded up and turned over by the Ustaše for extermination in Nazi Germany

The Independent State of Croatia was proclaimed by the Ustaše on 10 April 1941. Within the new state lived approximately 40,000 Jews, only 9,000 of whom would ultimately survive the war.[1] 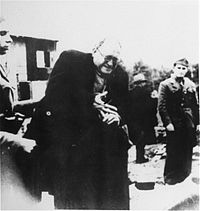 A Jewish prisoner is forced to remove his ring upon arrival in the Jasenovac concentration camp.
File:Ustasamilitia.jpg
Ustaše executing people over a mass grave near Jasenovac.

Anti-Semitic legislation and start of persecution

Actions against Jews began immediately after the Independent State of Croatia was founded. On 10th-11 April 1941 a group of prominent Jews in Zagreb was arrested by the Ustaše and held for ransom. On April 13, the same was done in Osijek, where Ustaše and Volksdeutcher mobs also destroyed the synagogue and Jewish graveyard.[3] This procedure was repeated in 1941 and 1942 several times with groups of Jews.

The Ustaše immediately initiated intensive anti-Semitic propaganda. A day after the signing of the main race laws on April 30, 1941, the newspaper of the Ustaše movement, Hrvatski narod (Croatian Nation), published across the entire front page: "The Blood and Honor of the Croatian people protected by special provisions".[4] Two days later, the newspaper Novi list concluded the Croatian people must "be more alert than any other ethnic group to protect their racial purity, ... We need to keep our blood clean of the Jews".[4] The newspaper also wrote that Jews are synonymous with "treachery, cheating, greed, immorality and foreigness", and therefore "wide swaths of the Croatian people always despised the Jews and felt towards them natural revulsion".[4] Nova Hrvatska (New Croatia) added that according to the Talmud, "this toxic. hot well-spring of Jewish wickedness and malice, the Jew is even free to kill Gentiles"[4]

One of the main claims of Ustaše propaganda was that the Jews have always been against an independent Croatian state and against the Croatian people. In April 1941 the newspaper Hrvatski narod (The Croatian People) accused Jews of being responsible for the "many failures and misfortunes of so many Croatian people", which led the Poglavnik [the Ustaše leader Ante Pavelic] to "eradicate these evils".[4] A Spremnost article stated that the Ustaša movement defines "Judaism as one of the greatest enemies of the people".[4]

Some in the Catholic Church joined the anti-Semitic propaganda. Thus the Catholic Bishop of Sarajevo, Ivan Šarić, published in his diocesan newspaper that "the movement to free the world of Jews, represents the movement for the restoration of human dignity. Omniscient and omnipotent God is behind this movement ".[5] And in July 1941, the Franciscan priest, Dionysius Juričev, in Novi list wrote that "it is no longer a sin to kill a seven year-old child".[6]

Already in April 1941 the Ustaše established the concentration camps Danica[7] (near Koprivnica) and Kerestinec, where along with communists and other political opponents, the Ustaše imprisoned Jews. In May 1941, the Ustaše rounded up 165 Jewish youth in Zagreb, ages 17–25, most of them members of the Jewish sports club Makabi, and sent them to the Danica concentration camp (all but 3 were killed by the Ustaše).[8] In May and June the Ustaše established new camps, primarily for Jews who came to Croatia as refugees from Germany and countries which Germany had previously occupied, and some of these were quickly killed. Also arrested and sent to the Ustaše camps were larger groups of Jews from Zagreb (June 22), Bihac (June 24), Karlovac (June 27), Sarajevo, Varaždin, Bjelovar, etc.

On July 8, 1941 the Ustaše ordered that all arrested Jews be sent to Gospic, from where they took the victims to death camps Jadovno on Velebit, and Slano on the island of Pag,[9] where they carried out mass executions. The historian Paul Mojzes lists 1,998 Jews, 38,010 Serbs, and 88 Croats killed at Jadovno and related execution grounds,[10][full citation needed] among them 1,000 children. Other sources generally offer a range of 10,000–68,000 deaths at the Jadovno system of camps, with estimates of the number of Jewish deaths ranging from several hundred[10][full citation needed] to 2,500–2,800.[11][full citation needed]

The destruction of the Sephardi synagogue in Sarajevo was carried out by Nazi German soldiers soon after their arrival in the city on 15 April.[16] The Sarajevo Haggadah was the most important artifact which survived this period. The demolition of the Zagreb Synagogue was ordered by the Ustaše mayor Ivan Werner and was carried out from 10 October 1941 to April 1942. The two Jewish football clubs in the state, ŽGiŠK Makabi Zagreb and ŽŠK Makabi Osijek, were banned in 1941.[17]

In February 1942 the Ustaše Interior Minister, Andrija Artuković, in a speech to the Croatian Parliament declared that:

"The Independent State of Croatia through its decisive action has solved the so-called Jewish question ... This necessary cleansing procedure finds its justification not only from a moral, religious and social point of view, but also from the national-political point of view: it is international Jewry associated with international communism and Freemasonry, that sought and still seeks to destroy the Croatian people".[18] The speech was accompanied by shouts of approval -" yes! - from the parliamentary benches

On 5 May 1943, Nazi SS leader Heinrich Himmler paid a short visit to Zagreb in which he held talks with Ante Pavelić.[19] Starting on 7 May, a roundup of the remaining Jews in Zagreb was carried out by the Gestapo under the command of Franz Abromeit.[20] During this period, Archbishop Stepinac offered the head rabbi in Zagreb Miroslav Šalom Freiberger help to escape the roundup, which he ultimately declined.[21] The operation lasted for the following week, and resulted in the capture of 1,700 Jews from Zagreb and 300 from the surrounding area. All of these people were taken to the Auschwitz concentration camp.[22]

After the capitulation of Italy on 8 September 1943, Nazi Germany annexed the Croat-populated Italian provinces of Pula and Rijeka into its Operational Zone Adriatic Coast. On 25 January 1944, the Germans demolished the Jewish synagogue in Rijeka.[22] The region of Međimurje had been annexed by the Kingdom of Hungary in 1941. In April 1944, the Jews of Međimurje were taken to a camp in Nagykanizsa where they were held until their transport to Auschwitz. An estimated 540 Međimurje Jews were murdered in Auschwitz, while 29 were murdered at Jasenovac.[23]

File:Ustaše order for Jews and Serbs to leave-1941.jpg
Order for Serbs and Jews to move out of their homes in Zagreb, Croatia and a warning of forcible expulsion and punishment of those that failed to comply.

The Ustasha regime launched the persecution of the Roma in May 1942. Whole families were arrested and were transported to the Jasenovac concentration camp, where they were immediately, or within a few months, killed. Estimates of the number of victims vary from 16,000 (this figure is given Vladimir Žerjavić) to 40,000. The Jasenovac Memorial in Croatia lists the names of 16,173 Roma killed at that concentration camp. Due to their way of life, many more victims are probably unrecorded. Thus, the German historian Alexander Korb and the United States Holocaust Memorial Museum in Washington, DC, both estimate at least 25,000 casualties among the Roma, which represents nearly the total Roma population in the Independent State of Croatia

On 5 May 1945, the Legal Decree on the Equalization of Members of the NDH Based on Racial Origin (Zakonska odredba o izjednačavanju pripadnika NDH s obzirom na rasnu pripadnost) was declared which repealed the racial laws enacted over the course of the war.

The United States Holocaust Memorial Museum lists the following number of victims in the Independent State of Croatia:

Slavko Goldstein estimates that approximately 30,000 Jews were killed from the Independent State of Croatia, with approximately 12,790 of those killed in Croatia. Vladimir Žerjavić's demographics research produced an estimate of 25,800 to 26,700 Jewish victims, of which he estimates that 19,000 were killed by the Ustasha in Croatia and Bosnia, and the rest abroad.[30]

The Jasenovac Memorial Site maintains the names of 13,116 Jews killed at the Jasenovac concentration camp.[15]

Righteous among the Nations

Over one hundred Croatians have been recognized as Righteous among the Nations. They include Žarko Dolinar and Mate Ujević.