Kolyma Tales (Russian: Колымские рассказы, Kolymskiye rasskazy) is the name given to six collections of short stories by Russian author Varlam Shalamov, about labour camp life in the Soviet Union. He began working on this book in 1954 and continued until 1973. 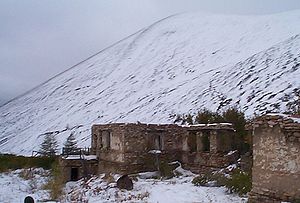 Butugychag tin mine - a Gulag camp in the Kolyma area

Shalamov was born in 1907 and was arrested in 1929 while he was a student at Moscow University for attempting to publish Lenin's Testament. He was sentenced to three years in Vishera, a satellite of the extensive labour camp system centered on a former monastery on Solovki. He was arrested again in 1937 and sentenced to five years in Kolyma, northeastern Siberia. His sentence was extended in 1942 until the end of the war and then in 1943 he was sentenced to another 10 years for describing Ivan Bunin as a great Russian writer. In total, Shalamov spent around 17 years in the camps.

He began to write Kolyma Tales after he was released but it was not to be published in the Soviet Union until after his death in 1982. He was able to publish five collections of poetry during his lifetime, and was well known as a poet before "Kolyma Tales" established his reputation as a Gulag writer. In 2013, the Soviet scholar David Satter wrote, "Shalamov's short stories are the definitive chronicle of those camps."[1]

The complete set of Kolyma Tales is based on two areas: personal experiences and fictional accounts of stories heard. He attempted to mix fact and fiction, which leads to the book being something of a historical novel. The style used is similar to Chekhov's, in which a story is told objectively and leaves the readers to make their own interpretations. Often brutal and shocking, the matter-of-fact style makes them appear more hard-hitting than using a sensationalist style. The stories are based around the life of the prisoners (political or professional) in the camp and their relations with the officials. We find accounts of prisoners who have become totally dispassionate, insane under the barbaric conditions, unemotionally murderous and suicidal.

Despite being written about imprisonment under the Stalinist regime, Shalamov made only one mention of Joseph Stalin in the book, a brief comment on a large portrait of Stalin in an administrator's office.

The original manuscript of Kolyma Tales was taken to the United States in 1966. Individual tales were published in the New Review between 1970 and 1976. The Russian version appeared in print only in 1978 by Overseas Publications Interchange Ltd in London. They could only be printed with a note claiming that they were being published without the author's consent in order to protect Shalamov. In 1980, John Glad had Kolyma Tales published from his own translations, which featured a selection of the stories. The follow-up book, Graphite, offers further stories from Kolyma Tales.

The book first appeared in the Soviet Union in 1989 and it was bought in bulk by queues of Soviet people.