From Infogalactic: the planetary knowledge core
Jump to: navigation, search
This article is about the Oklahoma City newspaper. For the 1957 western film, see The Oklahoman (film).

The newspaper was founded in 1889 by Sam Small and taken over in 1903 by Edward K. Gaylord. Gaylord would run the paper for 71 years. Upon his death, the paper was turned over to his son and later to his granddaughter. It was announced on September 15, 2011 that all Oklahoma Publishing Company (OPUBCO) assets, including The Oklahoman, would be sold to Denver based businessman Philip Anschutz and his Anschutz Corporation.[2] The sale of OPUBCO to Philip Anschutz closed in October 2011, and the Oklahoma Publishing Company remained independent in operation. Other Anschutz owned newspapers include The Gazette (Colorado Springs) and The Washington Examiner.

The Oklahoma Publishing Company (OPUBCO) office tower on Broadway Extension and Britton Road in Oklahoma City was sold to American Fidelity in 2012. Office space was then leased back to OPUBCO until plans were finalized for the company to move its headquarters. After a 23-year absence, The Oklahoman staff (and most OPUBCO employees) will be moving back to downtown Oklahoma City in late 2014. The new OPUBCO offices will be located at 100 W. Main in the heart of downtown Oklahoma City in the existing Century Center office building (connected to the Sheraton Hotel). The Oklahoman will continue to be printed at the existing production facility on Broadway Extension and Britton Road.[3] 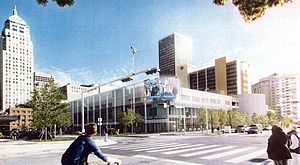 Rendering of the renovated Century Center – the future home of the Oklahoma Publishing Co. This view is from Sheridan Avenue and Robinson Avenue.
(photo courtesy Butzer Gardner) 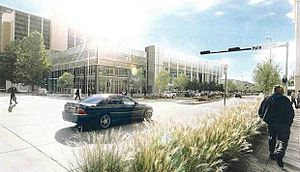 Rendering of the renovated Century Center – the future home of the Oklahoma Publishing Co. This view is from Robinson Avenue and Main.
(photo courtesy Butzer Gardner)

Founded in 1889 in Oklahoma City by Sam Small, The Daily Oklahoman was taken over in 1903 by The Oklahoma Publishing Company (OPUBCO), controlled by Edward K. Gaylord, also known as E. K. Gaylord. In 1916, OPUBCO purchased the failing Oklahoma Times and operated it as an evening newspaper for the next 68 years.[4] E. K. Gaylord died at the age of 101, having controlled the newspaper for the previous 71 years. Management of the newspaper passed to his son, Edward L. Gaylord, who managed the newspaper from 1974 to 2003. Christy Gaylord Everest, daughter of Edward L. Gaylord and granddaughter of E. K. Gaylord, was the company's chairwoman and CEO until 2011. Christy Everest was assisted by her sister Louise Gaylord Bennett until the sale of the company in 2011 to Philip Anschutz. The current CEO of OPUBCO is Gary Pierson. Gary served as COO for OPUBCO under Christy Everest.

In 1928, E. K. Gaylord bought Oklahoma's first radio station, WKY. More than 20 years later, he signed on Oklahoma's first television station, WKY-TV (now KFOR-TV). The two stations would be the anchors of a broadcasting empire that, at its height, included six television stations and five radio stations. Nearly all of the Gaylord broadcasting interests would be sold off by 1996, though The Oklahoman held onto WKY radio until 2002.[citation needed]

In 1939, Charles George Werner, a rookie political cartoonist at the newspaper, won the Pulitzer Prize for editorial art. The winning cartoon, Nomination for 1938, depicted the Nobel Peace Prize resting on a grave marked Grave of Czecho-Slovakia, 1919-1938. Published on October 6, 1938, the cartoon bit at the recently concluded Munich Agreement, which transferred the Sudetenland (a strategically important part of Czechoslovakia) to Nazi Germany.[5] Another notable cartoonist for the paper was Jim Lange, who worked for the paper for 58 years and produced over 19,000 cartoons.[6]

The last edition of the evening Oklahoma Times was published on Feb. 29, 1984. It was folded into The Daily Oklahoman beginning with the March 1, 1984, issue.[citation needed] A 1998 American Journalism Review survey acknowledged The Oklahoman's positive contributions as a corporate citizen of Oklahoma, but characterized the paper as suffering from understaffing, uninspired content, and political bias.[7] In 1999, the liberal Columbia Journalism Review [8] published an article calling The Oklahoman the "Worst Newspaper in America"; the CJR cited the paper's conformance to the right-wing political views of the Gaylord family, alleged racist hiring practices, and high costs of ads.[9] In more recent years OPUBCO Communications Group has won a number of awards for innovations, newspaper redesign, First Amendment coverage, sports coverage, breaking news and in-depth multimedia projects.[10]

The Oklahoman was formerly available for delivery statewide, but in November 2008 it announced that it was reducing its circulation area to cover approximately two-thirds of the state (Oklahoma City and points west), and that it would no longer be available for delivery in Tulsa, Oklahoma's second-largest city. The change reduced the paper's circulation by about 7,000 homes.[11][12] In January 2009, The Oklahoman and the Tulsa World announced a content-sharing agreement in which each paper would carry some content created by the other; the papers also said they would "focus on reducing some areas of duplication, such as sending reporters from both The Oklahoman and the World to cover routine news events."[13] In 2010 The Oklahoman introduced the first iPad app for a newspaper/multimedia company of its size in the United States.[14][15]