The School of Athens

The School of Athens, or Scuola di Atene in Italian, is one of the most famous frescoes by the Italian Renaissance artist Raphael. It was painted between 1509 and 1511 as a part of Raphael's commission to decorate the rooms now known as the Stanze di Raffaello, in the Apostolic Palace in the Vatican. The Stanza della Segnatura was the first of the rooms to be decorated, and The School of Athens, representing Philosophy, was probably the second painting to be finished there,[1] after La Disputa (Theology) on the opposite wall, and the Parnassus (Literature). The picture has long been seen as "Raphael's masterpiece and the perfect embodiment of the classical spirit of the Renaissance.[2]

The School of Athens is one of a group of four main frescoes on the walls of the Stanza (those on either side centrally interrupted by windows) that depict distinct branches of knowledge. Each theme is identified above by a separate tondo containing a majestic female figure seated in the clouds, with putti bearing the phrases: "Seek Knowledge of Causes," "Divine Inspiration," "Knowledge of Things Divine" (Disputa), "To Each What Is Due." Accordingly, the figures on the walls below exemplify Philosophy, Poetry (including Music), Theology, and Law.[3] The traditional title is not Raphael’s. The subject of the "School" is actually "Philosophy," or at least ancient Greek philosophy, and its overhead tondo-label, "Causarum Cognitio," tells us what kind, as it appears to echo Aristotle’s emphasis on wisdom as knowing why, hence knowing the causes, in Metaphysics Book I and Physics Book II. Indeed, Plato and Aristotle appear to be the central figures in the scene. However, all the philosophers depicted sought knowledge of first causes. Many lived before Plato and Aristotle, and hardly a third were Athenians. The architecture contains Roman elements, but the general semi-circular setting having Plato and Aristotle at its centre might be alluding to Pythagoras’ circumpunct.

Commentators have suggested that nearly every great ancient Greek philosopher can be found in the painting, but determining which are depicted is difficult, since Raphael made no designations outside possible likenesses, and no contemporary documents explain the painting. Compounding the problem, Raphael had to invent a system of iconography to allude to various figures for whom there were no traditional visual types. For example, while the Socrates figure is immediately recognizable from Classical busts, the alleged Epicurus is far removed from his standard type. Aside from the identities of the figures depicted, many aspects of the fresco have been variously interpreted, but few such interpretations are unanimously accepted among scholars. The popular idea that the rhetorical gestures of Plato and Aristotle are kinds of pointing (to the heavens, and down to earth) is very likely. But Plato’s Timaeus – which is the book Raphael places in his hand – was a sophisticated treatment of space, time, and change, including the Earth, which guided mathematical sciences for over a millennium. Aristotle, with his four-elements theory, held that all change on Earth was owing to motions of the heavens. In the painting Aristotle carries his Ethics, which he denied could be reduced to a mathematical science. It is not certain how much the young Raphael knew of ancient philosophy, what guidance he might have had from people such as Bramante, or whether a detailed program was dictated by his sponsor, Pope Julius II. Nevertheless, the fresco has even recently been interpreted as an exhortation to philosophy and, in a deeper way, as a visual representation of the role of Love in elevating people toward upper knowledge, largely in consonance with contemporary theories of Marsilio Ficino and other neo-Platonic thinkers linked to Raphael.[4] Finally, according to Vasari, the scene includes Raphael himself, the Duke of Mantua, Zoroaster and some Evangelists.[5]

However, as Heinrich Wölfflin observed, "it is quite wrong to attempt interpretations of the ‘School of Athens’ as an esoteric treatise ... The all-important thing was the artistic motive which expressed a physical or spiritual state, and the name of the person was a matter of indifference" in Raphael’s time.[6] What is evident is Raphael’s artistry in orchestrating a beautiful space, continuous with that of viewers in the Stanza, in which a great variety of human figures, each one expressing "mental states by physical actions," interact, in a "polyphony" unlike anything in earlier art, in the ongoing dialogue of Philosophy.[7]

An interpretation of the fresco relating to hidden symmetries of the figures and the star constructed by Bramante was given by Guerino Mazzola and collaborators.[8]

The identities of some of the philosophers in the picture, such as Plato or Aristotle, are certain. Beyond that, identifications of Raphael’s figures have always been hypothetical. To complicate matters, beginning from Vasari’s efforts, some have received multiple identifications, not only as ancients but also as figures contemporary with Raphael. [9]

Luitpold Dussler counts among those who can be identified with some certainty: Plato, Aristotle, Socrates, Pythagoras,[10] Euclid,[11] Ptolemy, Zoroaster, Raphael, Sodoma and Diogenes. Other identifications he holds to be "more or less speculative".[12]

A more comprehensive list of proposed identifications is given below:[13]

The parenthetical names are the contemporary characters from whom Raphael is thought to have drawn his likenesses. 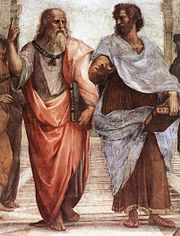 An elder Plato walks alongside Aristotle.

In the center of the fresco, at its architecture's central vanishing point, are the two undisputed main subjects: Plato on the left and Aristotle, his student, on the right. Both figures hold modern (of the time), bound copies of their books in their left hands, while gesturing with their right. Plato holds Timaeus, Aristotle his Nicomachean Ethics. Plato is depicted as old, grey, wise-looking, and bare-foot. By contrast Aristotle, slightly ahead of him, is in mature manhood, handsome, well-shod and dressed with gold, and the youth about them seem to look his way. In addition, these two central figures gesture along different dimensions: Plato vertically, upward along the picture-plane, into the beautiful vault above; Aristotle on the horizontal plane at right-angles to the picture-plane (hence in strong foreshortening), initiating a powerful flow of space toward viewers. It is popularly thought that their gestures indicate central aspects of their philosophies, for Plato, his Theory of Forms, and for Aristotle, his empiricist views, with an emphasis on concrete particulars. Many interpret the painting to show a divergence of the two philosophical schools. Plato argues a sense of timelessness whilst Aristotle looks into the physicality of life and the present realm. However,[original research?] Plato's Timaeus was, even in the Renaissance, a very influential treatise on the cosmos, whereas Aristotle insisted that the purpose of ethics is "practical" rather than "theoretical" or "speculative": not knowledge for its own sake, as he considered cosmology to be.

The building is in the shape of a Greek cross, which some have suggested was intended to show a harmony between pagan philosophy and Christian theology[2] (see Christianity and Paganism and Christian philosophy). The architecture of the building was inspired by the work of Bramante, who, according to Vasari, helped Raphael with the architecture in the picture.[2] Some have suggested that the building itself was intended to be an advance view of St. Peter's Basilica.[2]

There are two sculptures in the background. The one on the left is the god Apollo, god of light, archery and music, holding a lyre.[2] The sculpture on the right is Athena, goddess of wisdom, in her Roman guise as Minerva.[2]

The main arch, above the characters, shows a meander (also known as a Greek fret or Greek key design), a design using continuous lines that repeat in a "series of rectangular bends" which originated on pottery of the Greek Geometric period and then become widely used in ancient Greek architectural friezes.[19]

A number of drawings made by Raphael as studies for the School of Athens are extant.[20] A study for the Diogenes is in the Städel in Frankfurt[21] while a study for the group around Pythagoras, in the lower left of the painting, is preserved in the Albertina Museum in Vienna.[22] Several drawings, showing the two men talking while walking up the steps on the right and the Medusa on Athena's shield,[23] the statue of Athena (Minerva) and three other statues,[24] a study for the combat-scene in the relief below Apollo[25] and "Euclid" teaching his pupils[26] are in the Ashmolean Museum of Art and Archaeology at Oxford University.

The cartoon for the painting is in the Pinacoteca Ambrosiana in Milan.[27]

The Victoria and Albert Museum has a rectangular version over 4 metres by 8 metres in size, painted on canvas, dated 1755 by Anton Raphael Mengs on display in the eastern Cast Court.[28]

Modern reproductions of the fresco abound. For example, a full-size one can be seen in the auditorium of Old Cabell Hall at the University of Virginia. Produced in 1900 by George W. Breck to replace an older reproduction that was destroyed in a fire in 1895, it is four inches off scale from the original, because the Vatican would not allow identical reproductions of its art works.[29]

Other reproductions include: by Neide, in Königsberg Cathedral, Kaliningrad,[30] in the University of North Carolina at Asheville's Highsmith University Student Union, and a recent one in the seminar room at Baylor University's Brooks College. A copy of Raphael's School of Athens was painted on the wall of the ceremonial stairwell that leads to the famous, main-floor reading room of the Bibliothèque Sainte-Geneviève in Paris.

The two figures at the left of Plotinus were used as part of the cover art of both Use Your Illusion I and II albums of Guns N' Roses.