From Infogalactic: the planetary knowledge core
Jump to: navigation, search
For other uses, see The Thinker (disambiguation). 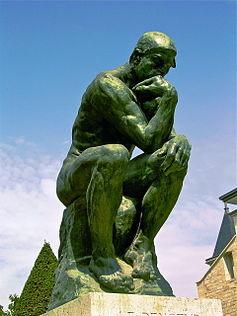 Le Penseur in the garden of the Rodin Museum, Philadelphia

The Thinker (French: Le Penseur) is a bronze sculpture by Auguste Rodin, usually placed on a stone pedestal. The work shows a nude male figure of over life-size sitting on a rock with his chin resting on one hand as though deep in thought, and is often used as an image to represent philosophy. There are about 28 full size castings, in which the figure is about 186 centimetres (73 in) high, though not all were made during Rodin's lifetime and under his supervision, as well as various other versions, several in plaster, studies, and posthumous castings, in a range of sizes. Rodin first conceived the figure as part of another work in 1880, but the first of the familiar monumental bronze castings did not appear until 1904. 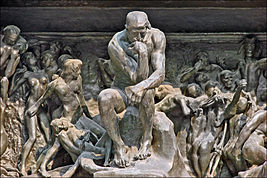 The Thinker in The Gates of Hell at the Musée Rodin

Originally named The Poet (French: Le Poète), the Thinker was initially a figure in a large commission, begun in 1880, for a doorway surround called The Gates of Hell. Rodin based this on The Divine Comedy of Dante, and most of the many figures in the work represented the main characters in the epic poem. Some critics believe The Thinker, at the centre of the composition over the doorway and at about 70 cm high larger than most other figures, was originally intended to depict Dante at the gates of Hell, pondering his great poem. However, there are questionable aspects to this interpretation, including that the figure is naked, Dante is fully clothed throughout his poem, and that the figure, as used, in no way corresponds to Dante's effete figure.[1] The sculpture is nude, as Rodin wanted a heroic figure in the tradition of Michelangelo, to represent intellect as well as poetry.

This detail from the Gates of Hell was first named The Thinker by foundry workers, who noted its similarity to Michelangelo's statue of Lorenzo de Medici called "Il Penseroso" (The Thinker).[2] Rodin decided to treat the figure as an independent work, at a larger size. The figure was designed to be seen from below, and is normally displayed on a fairly high plinth, though the heights chosen by the various owners for these vary considerably. 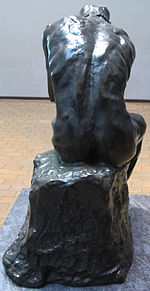 Signature of A. Rodin on a cast at Columbia University, NYC

The Thinker has been cast in multiple versions and is found around the world; the history of the progression from models to castings is complicated and still not entirely clear. About 28 monumental-sized bronze casts of the sculpture are in museums and public places. In addition, there are sculptures of different study size scales and plaster versions (often painted bronze) in both monumental and study sizes. Some newer castings have been produced posthumously and are not considered part of the original production.

Rodin made the first small plaster version around 1880. The first large-scale bronze casting was finished in 1902 but not presented to the public until 1904.[dubious – discuss] It became the property of the city of Paris — thanks to a subscription organized by Rodin admirers — and was put in front of the Panthéon in 1906. In 1922, it was moved to the Hôtel Biron, which had been transformed into the Rodin Museum.

The first cast sculpture can be found in front of Grawemeyer Hall on the University of Louisville Belknap Campus in Louisville, Kentucky. Made in Paris, it was first displayed at the St. Louis World's Fair in 1904 and was then given to the city. This sculpture was the only cast created by the lost-wax casting method.[3][citation needed]