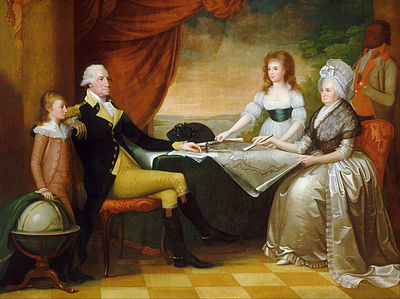 The Washington Family by Edward Savage is a life-sized group portrait of U.S. President George Washington, First Lady Martha Washington, two of her grandchildren, and a slave. Based on life studies made early in Washington's presidency, Savage began the work in New York City, 1789–90, and completed it several years later in Philadelphia, 1795–96.[1] The enormous painting (7 ft. x 9 ft. 4 in. / 213 cm. x 284 cm.) is now at the National Gallery of Art, Washington, D.C.[2]

The image was a famous one in the 19th century. Prints were mass-produced by Savage beginning in 1798, and by John Sartain in 1840.[3]

With a plan of the future city of Washington in front of her, Martha Washington is, according to Savage's catalogue, "pointing with her fan to the grand avenue" (now the National Mall).[2][4][5][6]