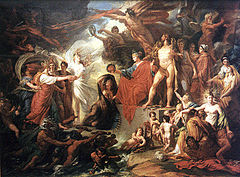 Gods in the Triumph of Civilization

Theism, in the field of comparative religion, is the belief in the existence of deities.[1] In popular parlance, the term theism often describes the classical conception of God that is found in the monotheistic and polytheistic religions.

The term theism derives from the Greek theos meaning "god". The term theism was first used by Ralph Cudworth (1617–88).[2] In Cudworth's definition, they are "strictly and properly called Theists, who affirm, that a perfectly conscious understanding being, or mind, existing of itself from eternity, was the cause of all other things".[3]

Atheism is commonly understood as rejection of theism in the broadest sense of theism; i.e. the absence of belief that there is even one deity.[4] Rejection of theism in the narrower sense is more seldomly regarded as atheism. Since such a-theism doesn't necessarily reject deism, pantheism, and polytheism, it is rather absorbed into such forms of expression. The claim that the existence of any deity is unknown or unknowable is agnosticism.[5][6] The positive assertion of knowledge, either of the existence of gods or the absence of gods, can also be attributed to some theists and some atheists. Put simply, theism and atheism deal with belief, and agnosticism deals with rational claims to asserting knowledge.[6]

Monotheism (from Greek μόνος) is the belief in theology that only one deity exists.[7] Some modern day monotheistic religions include Islam, Judaism, Baha'i Faith, Sikhism, Zoroastrianism, Eckankar and some forms of Hinduism, and Christianity.

Within polytheism there are hard and soft varieties:

Polytheism is also divided according to how the individual deities are regarded:

Some people find the distinction between these two beliefs as ambiguous and unhelpful, while others see it as a significant point of division.[10] Pantheism may be understood a type of Nontheism, where the physical universe takes on some of the roles of a theistic God, and other roles of God viewed as unnecessary.[11]

Deism typically rejects supernatural events (such as prophecies, miracles, and divine revelations) prominent in organized religion. Instead, Deism holds that religious beliefs must be founded on human reason and observed features of the natural world, and that these sources reveal the existence of a supreme being as creator.[13]

Autotheism is the viewpoint that, whether divinity is also external or not, it is inherently within 'oneself' and that one has a duty to become perfect (or divine). This can be in a selfless way, a way following the implications of statements attributed to ethical, philosophical, and religious leaders (such as Jesus[14][15] and Mahavira[citation needed]).

Autotheism can also refer to the belief that one's self is a deity (often the only one), within the context of subjectivism. This is a fairly extreme version of subjectivism, however.