Theobald Theodor Friedrich Alfred von Bethmann Hollweg (29 November 1856 – 1 January 1921) was a German politician who was the chancellor of the German Empire from 1909 to 1917. According to biographer Konrad H. Jarausch, a primary concern for Bethmann in July 1914 was the steady growth of Russian power, and the growing closeness of the British and French military collaboration. Under these circumstances he decided to run what he considered a calculated risk to back Vienna in a local small-scale war against Serbia, while risking a major war with Russia. He calculated that France would not support Russia. It failed when Russia decided on general mobilization, and his own Army demanded the opportunity to use the Schlieffen Plan for quick victory against a poorly prepared France. By rushing through Belgium, Germany expanded the war to include England. Bethmann thus failed to keep France and Britain out of the conflict, which became the First World War.[1]

Bethmann Hollweg was born in Hohenfinow, Brandenburg, the son of Prussian official Felix von Bethmann Hollweg. His grandfather was August von Bethmann-Hollweg, who had been a prominent law scholar, president of Frederick William University in Berlin, and Prussian Minister of Culture. His great-grandfather was Johann Jakob Hollweg, who had married a daughter of the wealthy Frankfurt am Main banking family of Bethmann, founded in 1748.[2]

His mother, Isabella de Rougemont, was a French Swiss.

He was educated at the boarding school of Schulpforta and at the Universities of Strasbourg, Leipzig and Berlin. Entering the Prussian administrative service in 1882, Bethmann Hollweg rose to the position of the President of the Province of Brandenburg in 1899. He married Martha von Pfuel, the niece of Ernst von Pfuel, Prime Minister of Prussia. From 1905 to 1907, Bethmann Hollweg served as Prussian Minister of the Interior and then as Imperial State Secretary for the Interior from 1907 to 1909. On the resignation of Chancellor Bernhard von Bülow in 1909, Bethmann Hollweg was appointed to succeed him.[3]

In foreign policy he pursued a policy of détente with Britain, hoping to come to some agreement that would put a halt to the two countries' ruinous naval arms race and give Germany a free hand to deal with France. The policy failed, largely from the opposition of German Naval Minister Alfred von Tirpitz. Despite the increase in tensions because of the Second Moroccan Crisis of 1911, Bethmann Hollweg improved relations with Britain to some extent, working with British Foreign Secretary Sir Edward Grey to alleviate tensions during the Balkan Crises of 1912–1913. He did not learn of the Schlieffen Plan until December 1912, after he had received the Second Haldane Mission.[4][incomplete short citation] He negotiated treaties over an eventual partition of the Portuguese colonies and the projected Berlin-Baghdad railway, the latter aimed in part at securing Balkan countries' support for a German-Ottoman alliance. The crisis came to a head on 5 July 1914 when the Count Hoyos Mission arrived in Berlin in response to Austro-Hungarian Foreign Minister Leopold Berchtold's plea for friendship. Bethmann Hollweg was assured that Britain would not intervene in the frantic diplomatic rounds across the European powers. However, reliance on that assumption encouraged Austria to demand Serbian concessions. His main concern was Russian border manoeuvres, conveyed by his ambassadors at a time when Raymond Poincaré himself was preparing a secret mission to St Petersburg. He wrote to Count Sergey Sazonov, "Russian mobilisation measures would compel us to mobilise and that then European war could scarcely be prevented."[5][incomplete short citation]

When War Minister Erich von Falkenhayn wanted to mobilise for war on 29 July, Bethmann was still against it but used his veto to prevent the Reichstag from debating it. Pourtales' telegram of 31 July was what Helmuth von Moltke the Younger, who declared a Zustand drohender Kriegsgefahr (state of imminent danger of war), wanted to hear; to Bethmann Hollweg's dismay, the other powers had failed to communicate Russia's provocation.

In domestic politics, Bethmann Hollweg's record was also mixed, and his compromising of socialists and liberals on the left and nationalists on the right alienated most of the German political establishment.

Following the assassination of Archduke Franz Ferdinand in Sarajevo on 28 June 1914, Bethmann Hollweg and his foreign minister, Gottlieb von Jagow, were instrumental in assuring Austria-Hungary of Germany's unconditional support, regardless of Austria's actions against Serbia. While Grey was suggesting a mediation between Austria-Hungary and Serbia, Bethmann Hollweg wanted Austria-Hungary to attack Serbia and so he tampered with the British message and deleted the last line of the letter:

Also, the whole world here is convinced, and I hear from my colleagues that the key to the situation lies in Berlin, and that if Berlin seriously wants peace, it will prevent Vienna from following a foolhardy policy.[6][incomplete short citation]

When the Austro-Hungarian ultimatum was presented to Serbia, Kaiser Wilhelm II ended his cruise of the North Sea and hurried back to Berlin.

When Wilhelm arrived at the Potsdam station late in the evening of July 26, he was met by a pale, agitated, and somewhat fearful Chancellor. Bethmann Hollweg's apprehension stemmed not from the dangers of the looming war, but rather from his fear of the Kaiser's wrath when the extent of his deceptions were revealed. The Kaiser's first words to him were suitably brusque: "How did it all happen?" Rather than attempt to explain, the Chancellor offered his resignation by way of apology. Wilhelm refused to accept it, muttering furiously, "You've made this stew, now you're going to eat it!"[7]

Bethmann Hollweg, much of whose foreign policy before the war had been guided by his desire to establish good relations with Britain, was particularly upset by Britain's declaration of war following the German violation of Belgium's neutrality during its invasion of France. He reportedly asked the departing British Ambassador Edward Goschen how Britain could go to war over a "scrap of paper" ("ein Fetzen Papier"), which was the 1839 Treaty of London guaranteeing Belgium's neutrality.

Bethmann Hollweg had made some plans in the event Britain came into the war and was involved closely in the plans to destabilise Britain's colonies, most notably the Hindu–German Conspiracy.[citation needed] 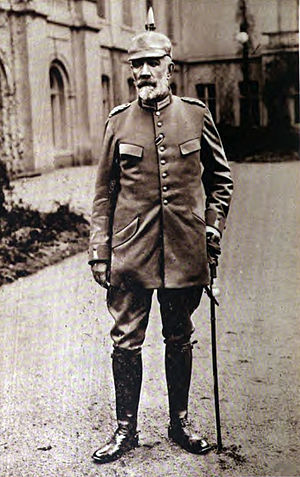 Bethmann Hollweg in uniform. He never served in the army, but after the war started, he was appointed to an honorary rank with a general's uniform.[8]

A tall, gaunt, sombre, well-trimmed aristocratic figure, Bethmann Hollweg sought approval from a declaration of war. His civilian colleagues pleaded for him to register some febrile protest, but he was frequently outflanked by the military leaders, who played an increasingly important role in the direction of all German policy.[9][incomplete short citation] However, according to historian Fritz Fischer, writing in the 1960s, Bethmann Hollweg made more concessions to the nationalist right than had previously been thought. He supported the ethnic cleansing of Poles from the Polish Border Strip as well as Germanisation of Polish territories by settlement of German colonists.[10]

Bethmann presented the Septemberprogramm, which was a survey of ideas from the elite should Germany win the war. Bethmann Hollweg, with all credibility and power now lost, conspired over Falkenhayn's head with Paul von Hindenburg and Erich Ludendorff (respectively commander-in-chief and chief of staff for the Eastern Front) for an Eastern Offensive. They then succeeded, in August 1916 in securing Falkenhayn's replacement by Hindenburg as Chief of the General Staff, with Ludendorff as First Quartermaster-General (Hindenburg's deputy). Thereafter, Bethmann Hollweg's hopes for US President Woodrow Wilson's mediation at the end of 1916 came to nothing. Over Bethmann Hollweg's objections, Hindenburg and Ludendorff forced the adoption of unrestricted submarine warfare in March 1917, adopted as a result of Henning von Holtzendorff's memorandum. Bethmann Hollweg had been a reluctant participant and opposed it in cabinet. The US entered the war in April 1917, perhaps the inevitability that they had wished to avoid.

Bethmann Hollweg remained in office until July 1917, when a Reichstag revolt resulted in the passage of Matthias Erzberger's Peace Resolution by an alliance of the Social Democratic, Progressive, and Centre parties, which forced his resignation and replacement by a relatively unknown figure, Georg Michaelis.

According to Wolfgang J. Mommsen, Bethmann Hollweg weakened his own position by failing to establish good control over public relations. To avoid highly intensive negative publicity, he conducted much of his diplomacy and secret, thereby failed to build strong support for it. In 1914 he was willing to risk a world war to win public support.[11]

During 1918, German support for the war was increasingly challenged by strikes and political agitation. In October sailors in the German Imperial Navy mutinied when ordered to set sail for a final confrontation with the British Navy. The Kiel Mutiny sparked off the November Revolution which brought the war to an end. Bethmann Hollweg tried to persuade the Reichstag to opt to negotiate for peace.

Intellectual supporters of the policy in Berlin, Arnold Wahnschaffe (1865–1941), undersecretary in the chancellery, and Arthur Zimmermann, were his closest and ablest colleagues. Bethmann Hollweg was directly responsible for devising the Flamenpolitik on the Western Front carried out in the Schlieffen Plan, yet this strategy's ultimate failure as a mode of occupation brought economic collapse and military defeat, as was clearly identified by the Bryce Report. The Chancellor's justification lay in the refrain that Germany was fighting a war of national survival.

Bethmann Hollweg received prominent attention throughout the world in June 1919, when he formally asked the Allied and the Associated Powers to place him on trial instead of the Kaiser.[12] The Supreme War Council decided to ignore his request. He was often mentioned as among those who might be tried by Allies for political offences in connection with the origin of the war.

In 1919, reports from Geneva said he was rumored in diplomatic circles there as leading the monarchists for both the Hohenzollerns and the Habsburgs, the nucleus of which was said to be located in Switzerland.[3]

The ex-Chancellor spent the short remainder of his life in retirement, writing his memoirs. A little after Christmas 1920, he caught a cold, which developed into acute pneumonia from which he died on 1 January 1921. His wife had died in 1914, and he had lost his eldest son in the war.

He was survived by a daughter, Countess Zech Burkescroda, the wife of the Secretary of the Russian Legation at Munich.[13]

Bethmann Hollweg is buried in Hohenfinow.