Theodor Heuss (31 January 1884 – 12 December 1963) was a liberal German politician who served as the first President of the Federal Republic of Germany after World War II from 1949 to 1959. Beside stern Chancellor Konrad Adenauer, Heuss' cordial manners largely contributed to the stabilization of democracy in West Germany during the Wirtschaftswunder years.

Heuss was born in Brackenheim, a small town in Württemberg near Heilbronn. This “wine community” lies close to the borderline of the Swabian to a Franconian area. He studied economics, art history and political science at the universities of Munich and Berlin, receiving his doctorate in 1905 in Munich with Lujo Brentano as his thesis adviser. On 11 April 1908, he married Elly Heuss-Knapp (1881–1952), with whom he had a son. The priest at the wedding ceremony held in Straßburg was Albert Schweitzer, a close friend of Elly.

After his studies Heuss worked as a political journalist in Berlin and from 1905 until 1912 presided over the magazine Die Hilfe ("The Help") published by Friedrich Naumann. From 1912 to 1918, he was editor in chief of the Neckarzeitung (Neckar Newspaper) in Heilbronn. In Berlin, he worked as editor for the weekly newsletter Deutsche Politik ("German Politics"). With Naumann, Heuss in 1903 he joined the liberal Free-minded Union, which in 1910 merged in the Progressive People's Party (Fortschrittliche Volkspartei), in which he was engaged until its dissolution in 1918.

After World War I, Heuss between 1923 and 1926 published the magazine Die Deutsche Nation ("The German Nation"). He had become a member of the German Democratic Party (Deutsche Demokratische Partei, DDP), from 1930 renamed German State Party (Deutsche Staatspartei, DStP), the political heir of the Fortschrittliche Volkspartei in 1918 and was a member of the Reichstag parliament from 1924 to 1928 and again from 1930 to 1933.

On 23 March 1933, along with his four fellow DStP parliamentarians, Heuss against his personal attitude voted in favour of the Enabling Act (Ermächtigungsgesetz), granting Chancellor Adolf Hitler quasi-dictatorial powers. He had set out to abstain, but after Heinrich Brüning indicated that with regard to the Reichskonkordat the Centre Party MPs would assent, ultimately subordinated to party discipline.[1] Alternative views of Hermann Dietrich, Weimar Republic finance minister claim that he was part of the majority in favor of voting for the enabling law.[2] When Germany became a one-party state, the DStP was dissolved on 28 June 1933 and Heuss was divested of his Reichstag mandate by decree of Minister of the Interior Wilhelm Frick with effect from July 8.

Following the end of his term he returned to private life. During the Third Reich he stayed in contact with a network of liberals, leading to contacts with the German resistance towards the end of the war, though he was not an active resister. In 1936 Heuss faced a publication ban, nevertheless in 1941 he became an employee of the Frankfurter Zeitung, one of the few remaining liberal newspapers at that time. Heuss wrote under pseudonyms until publishing of the paper was finally prohibited in 1943. He spent the following years writing a biography of Robert Bosch.

After World War II the US Office of Military Government on 24 September 1945 appointed Heuss the first Minister of Education and Cultural Affairs in the German state of Württemberg-Baden under his fellow party member Minister-president Reinhold Maier, in favour of whom he resigned in 1946. As a co-founder of the Democratic People's Party (Demokratische Volkspartei, DVP), the predecessor of the German Free Democratic Party (Freie Demokratische Partei, FDP) in the southwestern German states, he was a member of the Württemberg-Baden state parliament (Landtag) from 1946 to 1949. Heuss also taught history at the Stuttgart Institute of Technology in 1946 and 1947, receiving the title of an honorary professor in 1948.

After plans elaborated with Wilhelm Külz to build up an all-German liberal party had failed, Heuss in December 1948 was elected head of West German and Berlin sections of the newly founded Free Democratic Party. He advocated uniting all liberal parties in the Western occupation zones, overcoming the split between right liberals and left liberals that had existed in the Weimar Republic. In 1948, he was a member of the Parlamentarischer Rat (Parliamentary Council) at Bonn with considerable influence on the drafting of the Basic Law for the Federal Republic of Germany (Grundgesetz).

After being elected to the first German Bundestag, he relinquished his parliamentary mandate on 12 September 1949, when he was elected President by the Federal Convention (Bundesversammlung) defeating the Social Democrat leader Kurt Schumacher in the second ballot. By the time he was confirmed as the first democratic German president since Paul von Hindenburg, he refused to be called “Excellency”, preferring instead to be called simply “Herr Heuss”,[3] Herr Bundespräsident is the German term of address up to today. Heuss' plans for a new national anthem were aborted by Adenauer, who – in rare accordance with Kurt Schumacher – had the third stanza of the old Deutschlandlied established in 1952. 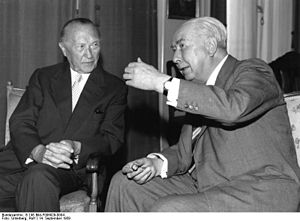 A widower since 1952, Heuss was re-elected in 1954 with practically no opposition, after the Social Democrats had renounced the nomination of a rival candidate. Not until May 1956, could he make his first state visit, invited by King Paul of Greece. The president, accompanied by Foreign Minister Heinrich von Brentano, was overwhelmed by the warm reception in Athens, considering that the country had heavily suffered under German occupation in World War II. He held office until the end of his term on 12 September 1959, succeeded by Heinrich Lübke. He had declined a third term in office, as this would have necessitated changing the constitution.

Heuss shaped the office of president by his non-partisan governing. As a representative of the democratic-liberal and cultural traditions of Germany, he was a symbol of confidence in the German post-war republic in the international community. His further state visits to Turkey, Italy, Canada and the United States, as well as to the United Kingdom contributed greatly to the increase of appreciation toward the still young Federal Republic of Germany. He was opposed to re-armament and the founding of the new West German Army in 1955, but had no power to stop it. His ironic speech at the swearing in of the first new soldiers, "Nun siegt mal schön!" ("Happy war-winning!"), is well remembered. In 1959, Heuss was awarded the prestigious Peace Prize of the German Book Trade (Friedenspreis des Deutschen Buchhandels'.')

Since 1964, the Theodor Heuss Prize has been awarded for exemplary democratic disposition. Heuss's former residence is now open to the public as the Theodor-Heuss-Haus. His image appeared on one series of the two-mark coin and numerous streets and squares all over Germany have been named in his honour. During his time in office, his image also appeared on definitive stamps in West Germany issued between 1954 and 1960. An Airbus A310 aircraft of the Luftwaffe used by the German head of government also carries his name.