Theodore Elijah Burton (December 20, 1851 – October 28, 1929) was a Republican politician from Ohio. He served in the United States House of Representatives and U.S. Senate.

Born in Jefferson, Ashtabula County, Ohio, Burton attended the public schools, Grand River Institute, Austinburg, Ohio, and Iowa College, Grinnell, Iowa. He graduated from Oberlin College in 1872. He studied law in Chicago with Lyman Trumbull, friend of Lincoln, and Senator of the United States for eighteen years.[1] He commenced the practice of law in 1875, becoming a prominent attorney in Cleveland. His first public office was member of Cleveland City Council.[1]

He was elected to the House of Representatives for the Fifty-first United States Congress in 1888 from the Ohio 21st District in Cleveland. but was defeated for re-election in 1890. He was not the Republican nominee in 1892, but was nominated again in 1894 and won election to the Fifty-fourth United States Congress. He was re-elected seven times, serving in the House until 1908.

He opposed wasteful spending in general, and despite his background as a corporate lawyer, he resisted the influence of big business. In his first term he co-sponsored the Sherman Anti-Trust Act.

After his re-election in 1908, he was elected to the Senate, and resigned his House seat. He served as Chairman of the Committee on Rivers and Harbors.

He did not seek a second Senate term. Instead he moved to New York City, and worked in banking for several years.

In 1916, he was considered a possible candidate for president, and received 77½ votes on the first ballot (out of 987) at the Republican national convention.[2] 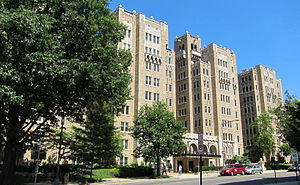 During his later House service, he was appointed by President Harding to the World War Debt Funding Commission in 1922; and was chairman of the United States delegation to the conference for the control of international traffic in arms at Geneva, Switzerland, in 1925.

As president of the American Peace Society, Burton hosted the First World Conference on International Justice in Cleveland in 1928, attended by 13,000, including world leaders.

From 1900 to 1912, Burton owned a country residence in Dover (now Westlake), Ohio, which had been built in 1838 by Thomas and Jane Hurst. The house was recorded in the Historic American Buildings Survey in 1936,[3] and commemorated by an Ohio Historical Marker in 2002.