Theological determinism is a form of determinism which states that all events that happen are pre-ordained, or predestined to happen, by a monotheistic deity, or that they are destined to occur given its omniscience. Theological determinism exists in a number of religions, including Judaism, Christianity and Islam. It is also supported by proponents of Classical pantheism such as the Stoics and Baruch Spinoza.

Free will and theological determinism 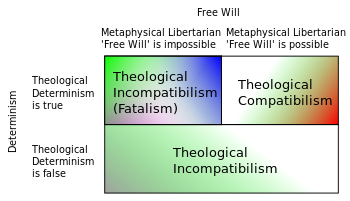 A simplified taxonomy of philosophical positions regarding free will and theological determinism.[7]

There are various implications for metaphysical libertarian free will as consequent of theological determinism and its philosophical interpretation.

A rejection of theological determinism (or divine foreknowledge) is classified as theological incompatibilism also (see figure, bottom), and is relevant to a more general discussion of free will.[7]

The basic argument for theological fatalism in the case of weak theological determinism is as follows;

Many Christians have opposed the view that humans do not have free will view. Saint Thomas Aquinas, the medieval Roman Catholic theologian, believed strongly that humanity had free will. (However, though he desired to defend a doctrine of free will, he ultimately ended up espousing what today would be known as compatibilism, or "soft determinism.")[12] The Jesuits were among the leading opponents of this view, because they held that divine grace was actual, in the sense that grace is among other things participative, and that humans could freely benefit from grace by a mediation between their own imperfect wills and the infinite mercy of God.

The concept of theological determinism has its origins within the Bible as well as within the Christian church. A major theological dispute at the time of the sixteenth century would help to force a distinct division in ideas - with an argument between two eminent thinkers of the time, Desiderius Erasmus and Martin Luther, a leading Protestant Reformer. Erasmus in Discourses On the Freedom of the Will believed that God created human beings with free will. He maintained that despite the fall of Adam and Eve freedom still existed. As a result of this humans had the ability to do good or evil. Luther, conversely attacked this idea in On the Bondage of the Will. He recognised that the issue of autonomy lay at the heart of religious dissension. He depicted an image of humanity manipulated through sin. Humans, for Luther, know what is morally right but are unable to attain it. He claimed that humans thus must give up aspiring to do good, as only by this could salvation be formed. Luther also believed that the fall of Adam and Eve as written in the Bible supported this notion.