From Infogalactic: the planetary knowledge core
Jump to: navigation, search
For the three saints with the names of these virtues, see Faith, Hope, and Charity.

Theological virtues, in theology and Christian philosophy, are the character qualities associated with salvation, resulting from the grace of God, which enlightens the human mind.[1]

The three theological virtues are:

These virtues are bestowed upon human beings during baptism (1 Tim 2:4 & Jn 3:5). They help individuals grow in their relationship with God with each act they commit that exhibits one of these virtues.

[He] desires all men to be saved and to come to the knowledge of the truth.

Unless one is born of water and the Spirit, he cannot enter the kingdom of God.

They are referenced and qualified in the Bible at 1 Corinthians 13:13:

And now abideth faith, hope, and love, even these three: but the chiefest of these is love.

Three things will last forever—faith, hope, and love—and the greatest of these is love.

The English word love for the third and greatest of the virtues, ἀγάπη (agapē), was used by all of the English translations of the Bible in the 16th century, including the Tyndale Bible (1534), the Bishops' Bible (1568), and the Geneva Bible (1560). It is also used by almost all current translations of the Bible, including the New King James Version, the New American Standard Bible, and the New International Version.

In Catholic theology, it is held that these virtues differ from the cardinal virtues in that they can not be obtained by human effort. A person can only receive them by their being "infused"—through Divine grace—into the person.

The theological virtues are so named because the object of these virtues is the divine being (theos). Other virtues have vice at their extremes, and are only virtues when they are maintained between these extremes. In the case of the Theological Virtues, they do not contribute to vice at the positive extreme; that is, there is no vice in having an unlimited amount of faith, hope, or love, when God is the object of that virtue.

More than one vice can be the opposite of each theological virtue:

Pope Benedict XVI wrote three encyclicals about the theological virtues: Deus caritas est (about love), Spe salvi (about hope), and Lumen fidei (about faith: this encyclical was written both by Pope Benedict XVI and by Pope Francis).[5] 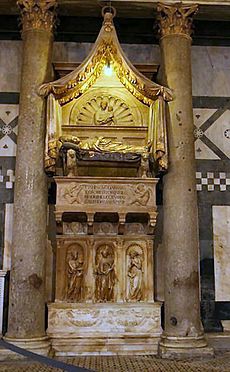 Theological Virtues are often depicted in art as young women. The symbols most often associated with them are:

For an example of this, the stained glass[6] at St. Martin's Church in Brampton, Carlisle.