From Infogalactic: the planetary knowledge core
Jump to: navigation, search
For the Cretan icon painter, see Theophanes of Crete. 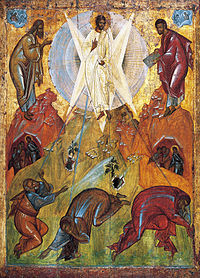 Theophanes the Greek (sometimes "Feofan Grek" from the Russian: Феофан Грек, Greek: Θεοφάνης; c. 1340 – c. 1410) was a Byzantine Greek artist and one of the greatest icon painters of Muscovite Russia, and was noted as the teacher and mentor of the great Andrei Rublev.

Theophanes was born in the capital of the Byzantine Empire, Constantinople. After studying Art and philosophy at the University of Constantinople, he moved to Novgorod in 1370, and in 1395 to Moscow. His style is considered unsurpassed in expression achieved by almost mono-colored painting. Some of his contemporaries observed that he appeared to be "painting with a broom", in reference to the bold, broad execution in some of his finest frescos (see St. Makarios of Egypt), which are unique in the larger Byzantine tradition. Theophanes was described by the Muscovites as "learned in philosophy", a reflection on his broad education and erudition. A hint of this might be gathered from his panel icon of the Transfiguration of Jesus, where the arresting geometry and brilliance of the figure of Christ is balanced against the ordered disarray of the earthbound Apostles, strewn about doll-like in the uncreated Light of Mount Tabor. The balance of mathematical harmony in line and shape, wed to a master's use of an earthtone palette and precious gold leaf, evokes a spirituality that is immensely powerful, and speaks to the genius of this relatively unknown painter.

Theophanes decorated in fresco the walls and ceilings of many churches including:

Although he created panel icons, works attributed to Theophanes have become a topic of intense academic debate based on historical evidence. Prior to this debate, he was traditionally considered the author of famous panel icons, notably: