In psychology, the theory of planned behavior (abbreviated TPB) is a theory that links beliefs and behavior. The concept was proposed by Icek Ajzen to improve on the predictive power of the theory of reasoned action by including perceived behavioural control.[1] It is one of the most predictive persuasion theories. It has been applied to studies of the relations among beliefs, attitudes, behavioral intentions and behaviors in various fields such as advertising, public relations, advertising campaigns and healthcare.

The theory states that attitude toward behavior, subjective norms, and perceived behavioral control, together shape an individual's behavioral intentions and behaviors. 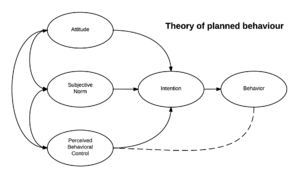 The theory of planned behavior.

Extension from the theory of reasoned action

The theory of planned behavior was proposed by Icek Ajzen in 1985 through his article "From intentions to actions: A theory of planned behavior."[2] The theory was developed from the theory of reasoned action, which was proposed by Martin Fishbein together with Icek Ajzen in 1975. The theory of reasoned action was in turn grounded in various theories of attitude such as learning theories, expectancy-value theories, consistency theories (such as Heider's Balance Theory, Osgood and Tannenbaum's Congruity Theory, and Festinger's Dissonance Theory) and attribution theory.[3] According to the theory of reasoned action, if people evaluate the suggested behavior as positive (attitude), and if they think their significant others want them to perform the behavior (subjective norm), this results in a higher intention (motivations) and they are more likely to do so. A high correlation of attitudes and subjective norms to behavioral intention, and subsequently to behavior, has been confirmed in many studies.[4]

In addition to attitudes and subjective norms (which make the theory of reasoned action), the theory of planned behavior adds the concept of perceived behavioral control, which originates from self-efficacy theory (SET). Self-efficacy was proposed by Bandura in 1977,[5] which came from social cognitive theory. According to Bandura, expectations such as motivation, performance, and feelings of frustration associated with repeated failures determine effect and behavioral reactions. Bandura separated expectations into two distinct types: self-efficacy and outcome expectancy.[6] He defined self-efficacy as the conviction that one can successfully execute the behavior required to produce the outcomes. The outcome expectancy refers to a person's estimation that a given behavior will lead to certain outcomes. He states that self-efficacy is the most important precondition for behavioral change, since it determines the initiation of coping behavior.

Previous investigations have shown that peoples' behavior is strongly influenced by their confidence in their ability to perform that behavior.[7] As the self-efficacy theory contributes to explaining various relationships between beliefs, attitudes, intentions, and behavior, the SET has been widely applied to health-related fields such as physical activity and mental health in preadolescents,[8] and exercise.[9][10][11]

Behavioral beliefs and attitude toward behavior

In previous studies, the construction and the number of item inventory of perceived behavioral control have depended on each particular health topic. For example, for smoking topics, it is usually measured by items such as "I don't think I am addicted because I can really just not smoke and not crave for it," and "It would be really easy for me to quit."

The concept of self-efficacy is rooted in Bandura's social cognitive theory.[17] It refers to the conviction that one can successfully execute the behavior required to produce the outcome. The concept of self-efficacy is used as perceived behavioral control, which means the perception of the ease or difficulty of the particular behavior. It is linked to control beliefs, which refers to beliefs about the presence of factors that may facilitate or impede performance of the behavior.

It is usually measured with items which begins with the stem, "I am sure I can ... (e.g., exercise, quit smoking, etc.)" through a self-report instrument in their questionnaires. Namely, it tries to measure the confidence toward the probability, feasibility, or likelihood of executing given behavior.

Attitude toward behavior vs. outcome expectancy

The theory of planned behavior specifies the nature of relationships between beliefs and attitudes. According to these models, people's evaluations of, or attitudes toward behavior are determined by their accessible beliefs about the behavior, where a belief is defined as the subjective probability that the behavior will produce a certain outcome. Specifically, the evaluation of each outcome contributes to the attitude in direct proportion to the person's subjective possibility that the behavior produces the outcome in question.[18]

Outcome expectancy was originated from the expectancy-value model. It is a variable-linking belief, attitude and expectation. The theory of planned behavior's positive evaluation of self-performance of the particular behavior is similar to the concept to perceived benefits, which refers to beliefs regarding the effectiveness of the proposed preventive behavior in reducing the vulnerability to the negative outcomes, whereas their negative evaluation of self-performance is similar to perceived barriers, which refers to evaluation of potential negative consequences that might result from the enactment of the espoused health behavior.

While most models are conceptualized within individual cognitive space, the theory of planned behavior considers social influence such as social norm and normative belief, based on collectivistic culture-related variables. Given that an individual's behavior (e.g., health-related decision-making such as diet, condom use, quitting smoking and drinking, etc.) might very well be located in and dependent on the social networks and organization (e.g., peer group, family, school and workplace), social influence has been a welcomed addition.

As a general rule, the more favorable the attitude toward behavior and subjective norm, and the greater the perceived behavioral control, the stronger the person's intention to perform the behavior in question should be. Finally, given a sufficient degree of actual control over the behavior, people are expected to carry out their intentions when the opportunity arises.[14]

In its simplest form, the theory of planned behavior can be expressed as the following mathematical function:

Evaluation of the theory

The theory of planned behavior can cover people's non-volitional behavior which cannot be explained by the theory of reasoned action.

Several studies found that the TPB would help better predict health-related behavioral intention than the theory of reasoned action.[20] The TPB has improved the predictability of intention in various health-related fields such as condom use, leisure, exercise, diet, etc.

In addition, the theory of planned behavior as well as the theory of reasoned action can explain the individual's social behavior by considering "social norm" as an important variable.

The theory of planned behavior is based on cognitive processing and level of behavior change.

Compared to affective processing models, the theory of planned behavior overlooks emotional variables such as threat, fear, mood and negative or positive feeling and assessed them in a limited fashion.

Some health behaviors and other types of behaviors may be largely influenced by emotion. However, this is not necessarily a drawback for predicting these behaviors, contrary to some complaints.[21] Strong emotions are relevant to this model because they can influence beliefs and other constructs in this model. Poor predictability for health-related behavior in previous health research may be attributed to poor application of the model, associated methods and measures. Most of the research is correlational, and more evidence based on experimental studies is welcome although experiments, by nature, lack external validity because they prioritize internal validity.[22]

Applications of the theory

In particular, recently, several studies found that the TPB would better help to predict health-related behavioral intention than the TRA[20] given that the TPB has improved the predictability of intention in various health-related fields such as condom use,[23][24] leisure,[25] exercise,[26] and diet.[27]

The Theory of Planned Behavior has been applied to study a range of pro-social behaviors, such as charitable giving. In one study, the TPB explained nearly 70% of the variance in intentions to donate to charity.[28]

Another application of the theory of planned behavior is in the field of environmental psychology. Generally speaking, actions that are environmentally friendly carry a positive normative belief. That is to say, sustainable behaviors are widely promoted as positive behaviors. However, although there may be a behavioral intention to practice such behaviors, perceived behavioral control can be hindered by constraints such as a belief that one's behavior will not have any impact.[29][30] For example, if one intends to behave in an environmentally responsible way but there is a lack of accessible recycling infrastructure, perceived behavioral control is low, and constraints are high, so the behavior may not occur. Applying the theory of planned behavior in these situations helps explain contradictions between sustainable attitudes and unsustainable behavior.

The theory of planned behavior model is thus a very powerful and predictive model for explaining human behavior. That is why the health and nutrition fields have been using this model often in their research studies. In one study, utilizing the theory of planned behavior, the researchers determine obesity factors in overweight Chinese Americans.[31] Intention to prevent becoming overweight was the key construct in the research process. It is important that nutrition educators provide the proper public policies in order to provide good tasting, low-cost, healthful food.

The Theory of Planned Behavior can also be applied in area of applied nutrition intervention. In a recent study by Sweitzer,[32] TPB (in conjunction with SCT) was utilized to encourage parents to pack more fruits, vegetables and whole grains (FVWG) in sack lunches of preschool children. Behavioral constructs of TPD were used to develop intervention strategies. Knowledge/behavioral control, Self-efficacy/perceived behavioral control, subjective norms and intentions were measured to see effects on behavior. The results found a significant increase in vegetables and whole grains packed in lunches when interventions were planned using the TPB constructs. Psychosocial variables were useful predictors of lunch packing behaviors of parents and this study provided a divergent application of model-exploration of an area of parental behavior as a role in the development of young children’s dietary behaviors. In a study by McConnon,[33] the application of the TPB was used to prevent weight regain in an overweight cohort who recently experienced a significant weight loss. Using the constructs of TPB, it was found that perceived need to control weight is the most positive predictor of behavior for weight maintenance. The TPB model can be used to predict weight gain prevention expectation in an overweight cohort. The TPB can also be utilized to measure behavioral intention of practitioners in promoting specific health behaviors. In this study by Chase,[34] dietitians’ intentions to promote whole grain foods was studied. It was found that the strongest indicator of intention of dietitians to promote whole grain foods was the construct of normative beliefs with 97% of dietitians indicating that health professionals should promote whole grains and 89% wanted to comply with this belief. However, knowledge and self-efficacy of instituting this belief was faulted with only 60% of dietitians being able to correctly identify a whole grain product from a food label, 21% correctly identifying current recommendations and 42% of dietitians did not know there was a recommendation for whole grain consumption. Although the response rate to complete mailed surveys for this study was low (39%), the results provided preliminary data on the strong effect of normative beliefs on dietitian intentions to promote whole grain and the need for nutrition need for additional education for practising dietitians focusing on increase knowledge and self-efficacy for promoting whole grains.