From Infogalactic: the planetary knowledge core
Jump to: navigation, search
This article is about the scientific concept. For philosophical or ontological theories about relativity, see Relativism. For the silent film, see The Einstein Theory of Relativity.

The theory of relativity, or simply relativity in physics, usually encompasses two theories by Albert Einstein: special relativity and general relativity.[1] Concepts introduced by the theories of relativity include spacetime as a unified entity of space and time, relativity of simultaneity, kinematic and gravitational time dilation, and length contraction.

The theory of relativity transformed theoretical physics and astronomy during the 20th century. When first published, relativity superseded a 200-year-old theory of mechanics created primarily by Isaac Newton.[4][5][6]

In the field of physics, relativity improved the science of elementary particles and their fundamental interactions, along with ushering in the nuclear age. With relativity, cosmology and astrophysics predicted extraordinary astronomical phenomena such as neutron stars, black holes and gravitational waves.[4][5][6]

Third, special relativity was accepted in the physics community by 1920. This theory rapidly became a significant and necessary tool for theorists and experimentalists in the new fields of atomic physics, nuclear physics, and quantum mechanics. Conversely, general relativity did not appear to be as useful. There appeared to be little applicability for experimentalists as most applications were for astronomical scales. It seemed limited to only making minor corrections to predictions of Newtonian gravitation theory.[4]

Finally, the mathematics of general relativity appeared to be very difficult. Consequently, it was thought that a small number of people in the world, at that time, could fully understand the theory in detail, but this has been discredited by Richard Feynman. Then, at around 1960 a critical resurgence in interest occurred which has resulted in making general relativity central to physics and astronomy. New mathematical techniques applicable to the study of general relativity substantially streamlined calculations. From this, physically discernible concepts were isolated from the mathematical complexity. Also, the discovery of exotic astronomical phenomena, in which general relativity was relevant, helped to catalyze this resurgence. The astronomical phenomena included quasars (1963), the 3-kelvin microwave background radiation (1965), pulsars (1967), and the discovery of the first black hole candidates (1981).[4]

On the theory of relativity

Einstein stated that the theory of relativity belongs to a class of "principle-theories". As such it employs an analytic method. This means that the elements which comprise this theory are not based on hypothesis but on empirical discovery. The empirical discovery leads to understanding the general characteristics of natural processes. Mathematical models are then developed to describe accurately the observed natural processes. Therefore, by analytical means the necessary conditions that have to be satisfied are deduced. Separate events must satisfy these conditions. Experience should then match the conclusions.[7] 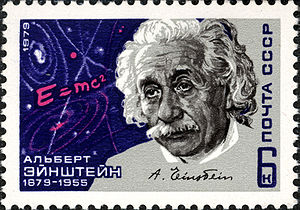 The resultant theory copes with experiment better than classical mechanics. For instance, postulate 2 explains the results of the Michelson–Morley experiment. Moreover, the theory has many surprising and counterintuitive consequences. Some of these are:

The defining feature of special relativity is the replacement of the Galilean transformations of classical mechanics by the Lorentz transformations. (See Maxwell's equations of electromagnetism).

General relativity is a theory of gravitation developed by Einstein in the years 1907–1915. The development of general relativity began with the equivalence principle, under which the states of accelerated motion and being at rest in a gravitational field (for example, when standing on the surface of the Earth) are physically identical. The upshot of this is that free fall is inertial motion: an object in free fall is falling because that is how objects move when there is no force being exerted on them, instead of this being due to the force of gravity as is the case in classical mechanics. This is incompatible with classical mechanics and special relativity because in those theories inertially moving objects cannot accelerate with respect to each other, but objects in free fall do so. To resolve this difficulty Einstein first proposed that spacetime is curved. In 1915, he devised the Einstein field equations which relate the curvature of spacetime with the mass, energy, and momentum within it.

Some of the consequences of general relativity are:

Technically, general relativity is a theory of gravitation whose defining feature is its use of the Einstein field equations. The solutions of the field equations are metric tensors which define the topology of the spacetime and how objects move inertially. 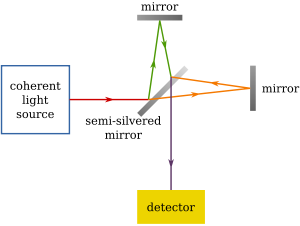 A diagram of the Michelson–Morley experiment

Like all falsifiable scientific theories, relativity makes predictions that can be tested by experiment. In the case of special relativity, these include the principle of relativity, the constancy of the speed of light, and time dilation.[10] The predictions of special relativity have been confirmed in numerous tests since Einstein published his paper in 1905, but three experiments conducted between 1881 and 1938 were critical to its validation. These are the Michelson–Morley experiment, the Kennedy–Thorndike experiment, and the Ives–Stilwell experiment. Einstein derived the Lorentz transformations from first principles in 1905, but these three experiments allow the transformations to be induced from experimental evidence.

Maxwell's equations – the foundation of classical electromagnetism – describe light as a wave which moves with a characteristic velocity. The modern view is that light needs no medium of transmission, but Maxwell and his contemporaries were convinced that light waves were propagated in a medium, analogous to sound propagating in air, and ripples propagating on the surface of a pond. This hypothetical medium was called the luminiferous aether, at rest relative to the "fixed stars" and through which the Earth moves. Fresnel's partial ether dragging hypothesis ruled out the measurement of first-order (v/c) effects, and although observations of second-order effects (v2/c2) were possible in principle, Maxwell thought they were too small to be detected with then-current technology.[11][12]

The Michelson–Morley experiment was designed to detect second order effects of the "aether wind" – the motion of the aether relative to the earth. Michelson designed an instrument called the Michelson interferometer to accomplish this. The apparatus was more than accurate enough to detect the expected effects, but he obtained a null result when the first experiment was conducted in 1881,[13] and again in 1887.[14] Although the failure to detect an aether wind was a disappointment, the results were accepted by the scientific community.[12] In an attempt to salvage the aether paradigm, Fitzgerald and Lorentz independently created an ad hoc hypothesis in which the length of material bodies changes according to their motion through the aether.[15] This was the origin of FitzGerald–Lorentz contraction, and their hypothesis had no theoretical basis. The interpretation of the null result of the Michelson–Morley experiment is that the round-trip travel time for light is isotropic (independent of direction), but the result alone is not enough to discount the theory of the aether or validate the predictions of special relativity.[16][17] 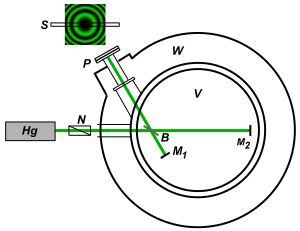 While the Michelson–Morley experiment showed that the velocity of light is isotropic, it said nothing about how the magnitude of the velocity changed (if at all) in different inertial frames. The Kennedy–Thorndike experiment was designed to do that, and was first performed in 1932 by Roy Kennedy and Edward Thorndike.[18] They obtained a null result, and concluded that "there is no effect ... unless the velocity of the solar system in space is no more than about half that of the earth in its orbit".[17][19] That possibility was thought to be too coincidental to provide an acceptable explanation, so from the null result of their experiment it was concluded that the round-trip time for light is the same in all inertial reference frames.[16][17]

The Ives–Stilwell experiment was carried out by Herbert Ives and G.R. Stilwell first in 1938[20] and with better accuracy in 1941.[21] It was designed to test the transverse Doppler effect – the redshift of light from a moving source in a direction perpendicular to its velocity – which had been predicted by Einstein in 1905. The strategy was to compare observed Doppler shifts with what was predicted by classical theory, and look for a Lorentz factor correction. Such a correction was observed, from which was concluded that the frequency of a moving atomic clock is altered according to special relativity.[16][17]

Those classic experiments have been repeated many times with increased precision. Other experiments include, for instance, relativistic energy and momentum increase at high velocities, time dilation of moving particles, and modern searches for Lorentz violations.

General relativity has also been confirmed many times, the classic experiments being the perihelion precession of Mercury's orbit, the deflection of light by the Sun, and the gravitational redshift of light. Other tests confirmed the equivalence principle and frame dragging.

General relativity (GR) is a theory of gravitation that was developed by Albert Einstein between 1907 and 1915, with contributions by many others after 1915.

Currently, it can be said that far from being simply of theoretical scientific interest or requiring experimental verification, the analysis of relativistic effects on time measurement is an important practical engineering concern in the operation of the global positioning systems such as GPS, GLONASS, and the forthcoming Galileo, as well as in the high precision dissemination of time.[22] Instruments ranging from electron microscopes to particle accelerators simply will not work if relativistic considerations are omitted.