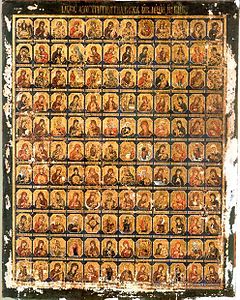 The ancient use of this term is emphasised in Churches of the Syriac Tradition, which have been using this title in their ancient liturgies for centuries: the Anaphora of Mari and Addai (3rd Century),[1][2] and the Liturgy of St James the Just (4th Century).[3][4] The Council of Ephesus decreed in 431 that Mary is Theotokos because her son Jesus is both God and man: one Divine Person with two natures (Divine and human) intimately, hypostatically united.[5][6]

Roman Catholics and Anglicans use the title "Mother of God" more often than "Theotokos". Lutherans also venerated and honored Mary as "Mother of God" as expressed by its founder, Martin Luther;[7] the title was officially confessed in their Formula of Concord,[8] accepted by Lutheran World Federation.[9] 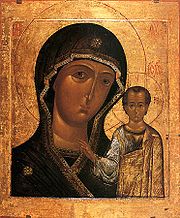 Theotokos is a compound of two Greek words, Θεός God and τόκος parturition, childbirth. Literally, this translates as God-bearer or the one who gives birth to God; historian Jaroslav Pelikan translated it more precisely as "the one who gives birth to the one who is God".[10] However, since many English-speaking Orthodox find this literal translation awkward, in liturgical use, Theotokos is often left untranslated, or paraphrased as Mother of God. The latter title is the literal translation of a distinct title in Greek, Μήτηρ του Θεού (translit. Mētēr tou Theou). Mother of God also accurately translates the Greek words Θεομήτωρ (translit. Theomētor; also spelled Θεομήτηρ, translit. Theomētēr) and Μητρόθεος (translit. Mētrotheos), which are found in patristic and liturgical texts.[11][12]

The English term Mother of God is mostly used as an imprecise translation of Theotokos, but with a note that Mary did not create the divine person of Jesus, who existed with the Father from all eternity,[13] she is not the source of her Son’s divinity.[14] The other principal use of Mother of God has been as the precise and literal translation of Μήτηρ Θεού, a Greek term which has an established usage of its own in traditional Orthodox and Catholic theological writing, hymnography, and iconography. In an abbreviated form, ΜΡ ΘΥ, it often is found on Eastern icons (see illustration above), where it is used to identify Mary.

However, those reading or hearing the English phrase Mother of God as a translation of a Greek text cannot — unless they know the Greek text in question, or obtain additional information — know whether the phrase is a literal translation of Μήτηρ Θεού, or an imprecise rendering of Θεοτόκος, or one its Latin equivalents or equivalents in other languages. On the other hand, Theotokos and its precise translations explicitly relate Mary's motherhood to Jesus' birth in time and exclude any reference to Mary as Mother of God from eternity.

Theotokos specifically excludes the understanding of Mary as Mother of God in the eternal sense. Christians believe that God is the cause of all, with neither origin nor source, and is therefore without a mother or father, or any relation except for what is homoousian to Him: only the persons of the Holy Trinity. He is ontologically separate from all other beings, as Creator to creation. This stands in contrast to classical Greco-Roman religion in particular, where a number of goddesses appear as the physical mothers of other divinities which were considered gods in their own right (cf. polytheism).

On the other hand, most Christians believe God the Son is begotten of God the Father "from all eternity" (see Trinity and Nicene Creed), but is born "in time" of Mary. Theotokos thus refers to the Incarnation, when the Second Person of the Holy Trinity took on human nature in addition to his pre-existing divine nature, this being made possible through the cooperation of Mary.

Though most Christians understand Jesus Christ as both fully God and fully human, only Orthodox Christians (in the East), and Roman Catholics, Anglicans, Lutherans, and schismatic Old Catholics (in the West), call Mary Theotokos. The Council of Ephesus decreed, in opposition to those who denied Mary the title Theotokos ("the one who gives birth to God") but called her Christotokos ("the one who gives birth to Christ"), that Mary is Theotokos because her son Jesus is one person who is both God and man, divine and human.[5][6] Cyril of Alexandria wrote, "I am amazed that there are some who are entirely in doubt as to whether the holy Virgin should be called Theotokos or not. For if our Lord Jesus Christ is God, how is the holy Virgin who gave [Him] birth, not [Theotokos]?" (Epistle 1, to the monks of Egypt; PG 77:13B). Thus the significance of Theotokos lies more in what it says about Jesus than any declaration about Mary, according to this Catholic doctrine.

Within the Orthodox doctrinal teaching on the economy of salvation, Mary's identity, role, and status as Theotokos is acknowledged as indispensable. For this reason, it is formally defined as official dogma. The only other Mariological teaching so defined is that of her virginity. Both of these teachings have a bearing on the identity of Jesus Christ. By contrast, certain other Marian beliefs which do not bear directly on the doctrine concerning the person of Jesus (for example, her sinlessness, the circumstances surrounding her conception and birth, her Presentation in the Temple, her continuing virginity following the birth of Jesus, and her death), which are taught and believed by the Orthodox Church (being expressed in the Church's liturgy and patristic writings), are not formally defined by the Church.

Use in the early Christian Church

Origen (d. 254) is often cited as the earliest author to use theotokos for Mary (Socrates, Ecclesiastical History 7.32 citing Origen's Commentary on Romans) but the text upon which this assertion is based may not be genuine. The basis for this doubt was eliminated with the discovery of a copy of hymnal (Greek Papyrus 470) contemporary with Origen's Commentary that use the same title for Mary in its liturgy. [16]

Athanasius of Alexandria in 330, Gregory the Theologian in 370, John Chrysostom in 400, and Augustine all used theotokos.[17]

Sub tuum praesidium, a Coptic Orthodox hymn dating approximately to the year 250, refers to Mary as the theotokos.[18]

The use of Theotokos was formally affirmed at the Third Ecumenical Council held at Ephesus in 431. The competing view, advocated by Patriarch Nestorius of Constantinople, was that Mary should be called Christotokos, meaning "Birth-giver of Christ," to restrict her role to the mother of Christ's humanity only and not his divine nature.

Nestorius' opponents, led by Cyril of Alexandria, viewed this as dividing Jesus into two distinct persons, the human who was Son of Mary, and the divine who was not. To them, this was unacceptable since by destroying the perfect union of the divine and human natures in Christ, it sabotaged the fullness of the Incarnation and, by extension, the salvation of humanity. The council accepted Cyril's reasoning, affirmed the title Theotokos for Mary, and anathematised Nestorius' view as heresy. (See Nestorianism)

In letters to Nestorius which were afterwards included among the council documents, Cyril explained his doctrine. He noted that "the holy fathers... have ventured to call the holy Virgin Theotokos, not as though the nature of the Word or his divinity received the beginning of their existence from the holy Virgin, but because from her was born his holy body, rationally endowed with a soul, with which [body] the Word was united according to the hypostasis, and is said to have been begotten according to the flesh" (Cyril's second letter to Nestorius).

"Confessing the Word to be united with the flesh according to the hypostasis, we worship one Son and Lord, Jesus Christ. We do not divide him into parts and separate man and God as though they were united with each other [only] through a unity of dignity and authority... nor do we name separately Christ the Word from God, and in similar fashion, separately, another Christ from the woman, but we know only one Christ, the Word from God the Father with his own flesh... But we do not say that the Word from God dwelt as in an ordinary human born of the holy virgin... we understand that, when he became flesh, not in the same way as he is said to dwell among the saints do we distinguish the manner of the indwelling; but he was united by nature and not turned into flesh... There is, then, one Christ and Son and Lord, not with the sort of conjunction that a human being might have with God as in a unity of dignity or authority; for equality of honor does not unite natures. For Peter and John were equal to each other in honor, both of them being apostles and holy disciples, but the two were not one. Nor do we understand the manner of conjunction to be one of juxtaposition, for this is insufficient in regard to natural union.... Rather we reject the term 'conjunction' as being inadequate to express the union... [T]he holy virgin gave birth in the flesh to God united with the flesh according to hypostasis, for that reason we call her Theotokos... If anyone does not confess that Emmanuel is, in truth, God, and therefore that the holy virgin is Theotokos (for she bore in a fleshly manner the Word from God become flesh), let him be anathema." (Cyril's third letter to Nestorius)

Theotokos is often used in hymns to Mary in the Eastern Orthodox, Eastern Catholic and Oriental Orthodox churches. The most common is Axion Estin (It is truly meet), which is used in nearly every service.

Other examples include Beneath thy compassion dating from the third century, the Hail Mary in its Eastern form, and All creation rejoices, which replaces Axion Estin at the Divine Liturgy on the Sundays of Great Lent.

In regards to the Roman Catholic Church, the solemnity of Mary as Mother of God is celebrated on 1 January, on the same day as the Octave of Christmas. Her maternity was celebrated on 11 October in pre-1970 versions of the General Roman Calendar, which some traditional Catholics still observe.

This solemnity comes from around 500 AD and was originally celebrated in the Eastern Churches.