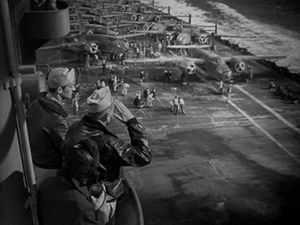 Thirty Seconds Over Tokyo is a 1944 American war film released by Metro-Goldwyn-Mayer. It is based on the true story of the Doolittle Raid, America's first retaliatory air strike against Japan four months after the December 1941 Japanese attack on Pearl Harbor.

Mervyn LeRoy directed Thirty Seconds Over Tokyo and Sam Zimbalist produced the film. The screenplay by Dalton Trumbo was based on the 1943 book of the same name, written by Captain Ted W. Lawson, a pilot who participated in the raid. In both the book and the film, Lawson gives an eyewitness account of the training, the mission, and the aftermath as experienced by his crew and others who flew the mission on April 18, 1942. Lawson piloted "The Ruptured Duck", the seventh of 16 B-25s to take off from the aircraft carrier USS Hornet aka, "Shangri-La."

Thirty Seconds Over Tokyo stars Van Johnson as Lawson, Phyllis Thaxter as his wife Ellen, Robert Walker as Corporal David Thatcher, Robert Mitchum as Lieutenant Bob Gray and Spencer Tracy as Lieutenant Colonel Jimmy Doolittle, the man who planned and led the raid. The film is noted for its accurate depiction of the historical details of the raid, as well as its use of actual wartime footage of the bombers in some flying scenes.

In February 1942, just two months after the Pearl Harbor attack, the United States Army Air Forces plan to retaliate by bombing Tokyo and four other Japanese cities—taking advantage of the fact that US aircraft carriers can approach near enough to the Japanese mainland to make such an attack feasible.

Lt.Col. James Doolittle (Spencer Tracy), the leader of the mission, assembles a volunteer force of aircrews, who begin their top-secret training by learning a new technique to make their North American B-25 Mitchell medium bombers airborne in the short distance of 500 feet or less, to simulate taking off from the deck of an aircraft carrier.

After depicting the raiders' weeks of hazardous training at Eglin Field, Florida and Naval Air Station Alameda, the story goes on to describe the raid and its aftermath.

While en route to Japan, the Hornet's task force is discovered by a Japanese picket boat, which has radioed their position. It is sunk, and the bombers are forced to take off 12 hours early at the extreme limit of their range. However, the bombers do make it to Japan and drop their bombs.

After the attack, all but one of the B-25s run out of fuel before reaching their recovery airfields in China. As a result, their crews are forced to either bail out over China or crash-land along the coast.[Note 1]

Lawson's B-25 unfortunately crashes in the surf just off the Chinese coast while trying to land on a beach in darkness and heavy rain. He and his crew survive, badly injured, but then face more hardships and danger while being escorted to American lines by friendly Chinese. While he is en route, Lawson's injuries require the mission's flight surgeon to amputate one of his legs.

The story ends with Lawson being reunited with his wife Ellen in a Washington, D.C., hospital.

As appearing in screen credits:

Verisimilitude was obtained by working closely with Captain Ted Lawson and other members of the raid. The use of Hurlburt Field and Peel Field near Mary Esther, Florida and Eglin Field (present day Eglin AFB, the actual base where the Doolittle Raiders trained), along with using operational USAAF B-25C and -D bombers (which closely resembled the B-25B Mitchells used in 1942) made for an authentic, near-documentary feel. Auxiliary Field 4, Peel Field, was used for the short-distance take off practice scenes.[4]

Although an aircraft carrier was not available due to wartime needs (the USS Hornet itself had been sunk in the Battle of the Santa Cruz Islands on 27 October 1942 only six months after launching the raid), a mix of realistic studio sets and original newsreel footage faithfully recreated the USS Hornet scenes. Principal photography took place between February and June 1944.[5] [Note 2]

Recognized as an inspirational patriotic film with propagandistic values, The New York Times in 1944 summed up the universal verdict on the production, "our first sensational raid on Japan in April 1942 is told with magnificent integrity and dramatic eloquence ..."[6] Variety focused on the human elements, "inspired casting ... the war becomes a highly personalized thing through the actions of these crew members."[7]

Critical acclaim followed Thirty Seconds Over Tokyo with many reviewers considering it the finest aviation film of the period.[8] The film is now considered a "classic aviation and war film."[9] The actual Raiders considered it a worthy tribute.[10]

In the 1945 Academy Awards, the Thirty Seconds Over Tokyo team of A. Arnold Gillespie, Donald Jahraus and Warren Newcombe (photography) and Douglas Shearer (sound) won the Oscar for Best Special Effects. Robert Surtees, A.S.C. and Harold Rosson, A.S.C. were also nominated in the category of Black and White Cinematography.[11][12]

At a point in his career when he rarely made public appearances or commercials, Thirty Seconds Over Tokyo star Van Johnson did a 1970s commercial for Post Fortified Oat Flakes breakfast cereal on a set reminiscent of B-25s on an aircraft carrier flight deck, concluding with the line that the cereal would "take me to Tokyo – and back!" [13]