Thiruvalluvar (Tamil: திருவள்ளுவர், Tiruvaḷḷuvar ?) is a celebrated Tamil poet and philosopher[1] whose contribution to Tamil literature is the Thirukkural, a work on ethics.[2] He was born either in Thiru Mylai (Mylapore) Chennai in Tamil Nadu or in ThirunayanarKuruchi, a village in Kanyakumari District of Tamil Nadu.Thiruvalluvar is thought to have lived sometime between the 3rd century BC and the 1st century BC.[3] The Tamil poet Mamulanar of the Sangam period mentioned that Thiruvalluvar was the greatest Tamil scholar and Mamulanar also mentioned the Nanda Dynasty of northern which ruled until the 4th century BC.[4][5] This estimate is based on linguistic analysis of his writings, as there is no archaeological evidence for when he lived.[6] He is sometimes also called Theiva Pulavar ("Divine Poet"), Valluvar, Poyyamozhi Pulavar, Senna Pothar,Gnana Vettiyan or Ayyan. 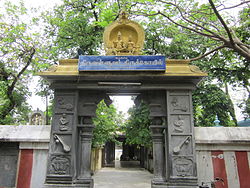 A temple for Thiruvalluvar in Mylapore

He has been said to have been a weaver and the supposed house he lived is now converted to a temple. His wife's name is Vaasuki. There are lots of legends about the pair Thiruvalluvar and Vaasuki. Two of them are, 1) Once Vaasuki ammaiyar was drawing water from well and Thiruvalluvar called her and she left the water and ran in immediately, but the water pot stayed in mid air. Such was her austerity and dedication towards her husband Thiruvalluvar. 2) Thiruvalluvar used to sit every day for meal with a cup of water and a wooden tooth pick. He did this to pick any grain of rice spilled out from his leaf when Vaasuki Ammaiyar served food. It was said that Thiruvalluvar could not even pick a grain of rice every day. Such was the dedication in serving meal by Vaasuki Ammaiyar. Thiruvalluvar may have spent part of his life in Madurai because it was under the Pandiya rulers that many Tamil poets flourished. There is also the recent claim by Kanyakumari Historical and Cultural Research Centre (KHCRC) that Valluvar was a king who ruled Valluvanadu in the hilly tracts of the Kanyakumari District of Tamil Nadu.[8] [9] 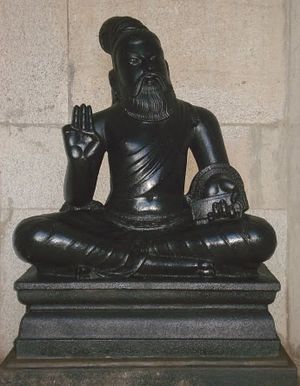 Thirukkural is one of the most revered ancient works in the Tamil language. It is considered a 'common creed',[10] providing a guide for human morals and betterment in life. Thirukkural has been translated into several languages,[11] including a translation into Latin by Constanzo Beschi in 1730, which helped make the work known to European intellectuals.

Thirukkuṛaḷ is divided into three sections: section one deals with Aram, good ethical behavior with conscience and honor ("right conduct"); section two discusses Porul, the right manner of conducting worldly affairs; and section three dwells on Kaamam, love between men and women. The first section has 38 chapters, the second 70 chapters and the third 25 chapters. Each chapter consists of 10 couplets or kurals, for a total of 1330 couplets. Although two sections, Aram and Inbam, are devoted to the private life of an individual more than half the couplets in Thirukural are grouped under Porul which discusses ethics in public life. Thus Thiruvalluvar gives more importance to righteous living in public life.

The Thiruvalluvar Statue is a 133 feet (40.6 m) tall stone sculpture which was opened on 1 January 2000 and is located atop a small island near the town of Kanyakumari, where two seas and an ocean meet. The statue has a height of 95 feet (29 m) and stands upon a 38-foot (11.5 m) pedestal that represents the 38 chapters of "virtue" in the Thirukkural. The statue standing on the pedestal represents "wealth" and "pleasures", signifying that wealth and love be earned and enjoyed on the foundation of solid virtue. The combined height of the statue and pedestal is 133 feet, denoting the 133 chapters in the Thirukkural. It has a total weight of 7000 tons. The statue, with its slight bend around the waist is reminiscent of a dancing pose of the ancient Indian deities like Nataraja.

Other than the Thirukkuṛaḷ, Thiruvalluvar is alleged to be the author of two Tamil texts on medicine, Gnana Vettiyan and Pancharathnam; although many scholars claim that they were by a later author with the same name,[12] since they appear to have been written in the sixteenth and seventeenth centuries.these books panchae raethnaem and gnana veatiaen contributes to the Tamil,science, literature and other ayur veda medicines[13] 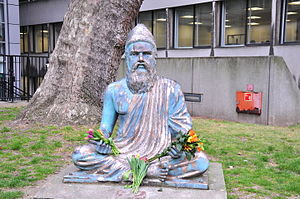 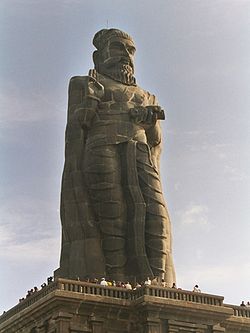 A temple-like memorial to Thiruvalluvar, Valluvar Kottam, was built in Chennai in 1976.[14] This monument complex consists of structures usually found in Dravidian temples,[15] including a temple car[16] carved from three blocks of granite, and a shallow, rectangular pond.[14] The auditorium adjoining the memorial is one of the largest in Asia and can seat up to 4000 people.[17]

There is a 133-foot tall statue of Thiruvalluvar erected at Kanyakumari at the southern tip of the Indian subcontinent, where the Arabian Sea, the Bay of Bengal, and the Indian Ocean converge. The 133 feet denote Tirukkuṛaḷ's 133 Chapters or athikarams and the show of three fingers denote the three themes Aram, Porul, and Inbam, i.e. the sections on Morals, Wealth and Love. The statue was designed by V. Ganapati Sthapati, a temple architect from Tamil Nadu.[18] His statue was unveiled in Ulsoor, near Bengaluru, on 9 August 2009, also making it the first of its kind for a poet of a local language to be installed in its near states other than his own home land at India. There is also a statue of Thiruvalluvar outside the School of Oriental and African Studies in Russell Square, London.[19]

The government of Tamil Nadu celebrates the 15th (16th On Leap Years) of January as (as Per Tamil Calendar தை-2) Thiruvalluvar Day as part of the Pongal celebrations in his honour.[20]