Thomas traces its roots to 1916, when it was incorporated as the Perley A. Thomas Car Works in High Point, North Carolina. Thomas Car Works initially specialized in the production of electric streetcars; a few still exist today. As buses largely superseded streetcars as a mode of public transportation during the 1930s, the company shifted to buses with most production dedicated to school buses. By the 1970s, Thomas Car Works had become one of the dominant school bus manufacturers in North America. In 1972, the company reorganized, adopting its current name, Thomas Built Buses.

Perley A. Thomas (1874–1958) was a native of Canada and a millwright (specifically in woodworking), by trade. He worked for a subsidiary of the famous streetcar manufacturer J. G. Brill and Company, in Cleveland, Ohio, early in the 20th century, and attended night school courses in structural engineering at Case Institute of Technology then moved south to work for another streetcar builder at its High Point, N.C., location in 1910. Thomas became chief engineer, draftsman and designer for the company, using both his mechanical skills and his experience as a skilled woodworker. When the streetcar industry began to turn from wooden to steel construction, Thomas was able to make the switch, but his employer, Southern Car Company went out of business in 1916. 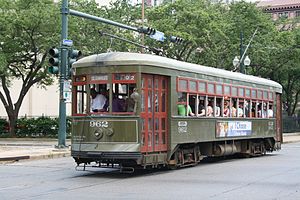 Thomas founded Perley A. Thomas Car Works, Inc. in 1916[1] as his own streetcar building company, using the former facilities and many employees of the Southern Car Company. During the next 20 years, Perley A. Thomas streetcars were built and delivered to communities all across the United States, including New Orleans, where they operated on the Desire line made famous by Tennessee Williams' 1947 Broadway play and later film of the same name, A Streetcar Named Desire. New Orleans is one of the only cities where Perley A. Thomas streetcars can still be found in active service as public transportation vehicles (as opposed to museum pieces and novelty rides).

The national trend in the United States in the 1920s and 1930s was toward use of personal automobiles rather than riding public transportation. As streetcar ridership decreased, less costly buses were often used in substitution by the companies operating the service. Orders for new streetcars and renovations began falling off.

Just as he had made the transition from wooden to steel streetcar building, Thomas and his workers at High Point also made the transition to building buses successfully. In 1934, Duke Power of South Carolina had Thomas build 10 transit buses. In 1936, Thomas ceased production of streetcars and launched a new product: the school bus. The same year, the company built 200 wooden-bodied school buses for the state of North Carolina, beginning a long tradition with that state which continues to the present day.[1]

In the early days of the school bus, Perley Thomas and his company's reputation for design innovation and quality manufacturing helped transform the industry. In the United States, many school buses in the 1930s were nothing more than flatbed truck chassis with wooden sides and a canvas roof, and had few or no safety devices.[2]

In 1938, the company introduced the first welded all-steel bus body. In 1939, Dr. Frank W. Cyr of New York, who became known as "The Father of the Yellow School Bus", hosted a 7 day long national conference of industry and school leaders which established 44 important safety standards and the yellow color for school buses all across the United States. 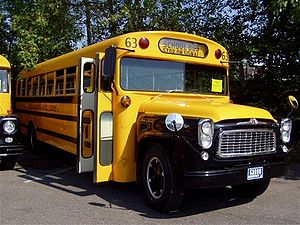 Thomas Built Buses, Inc. was incorporated in 1972 as the successor to Perley A. Thomas Car Works.[1] In 1978, Thomas introduced its first company-designed bus chassis for its popular Saf-T-Liner transit-style bus; the Saf-T-Liner was sold for both for school and commercial use. In the past, Thomas was previously dependent upon truck chassis made by other companies for its transit-style school bus bodies (particularly Ford, Dodge, GMC, International Harvester and even Volvo), much like the majority of other school bus manufacturers. Thomas was the first school bus manufacturer to design its own chassis for both its front and rear-engine models, beating competitor Blue Bird by a decade (California manufacturers Crown Coach and Gillig Corporation did not manufacture a front-engine model that competed with Thomas).

The late 1970s and early 1980s was a period of struggle for school bus manufacturers. Coupled with the slow economy, manufacturers could no longer count on the factor that had driven school bus sales for the past two decades: the entirety of the baby-boom generation had finished school; it would be years before student populations would create sufficient demand again. During this time, a number of manufacturers either encountered financial difficulty or closed their doors altogether. Thomas diversified its product lineup, entering the small school bus market, creating unique products, and redesigning its transit-style buses to compete with newly introduced competitors.

In 1980, the company began to manufacture a smaller school bus on a cutaway van chassis, the Thomas Minotour, which is still in production (as of 2010). Also in the 1980s, the company entered the commercial public transit bus market. In 1989, Thomas introduced the Thomas Vista school bus, a modified conventional design providing improved front-end visibility for drivers. Early in the 1990s, Thomas introduced the MVP (which stood for Maneuverability, Visibility, and Protection);[citation needed] a transit-style school bus, available in front and rear-engine models, the MVP was a lower-cost version of the standard Saf-T-Liner intended to boost sales. The front-engine MVP was still sold in 2010 as the Saf-T-Liner EF.

By the end of the 20th century, Thomas (along with Blue Bird and Ward successor AmTran) was one of only three principal builders of large school buses in the United States. It is still based in High Point, and in 1998, was acquired by the Freightliner Group of Daimler AG. Currently, Thomas employs over 1,600 people worldwide. 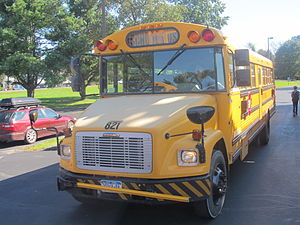 In the 1990s, the school bus industry was changed by a number of acquisitions and mergers. Several of the acquiring firms were either truck manufacturers or custom chassis builders. In the case of Thomas, they were acquired in 1998 by the Freightliner division of Daimler AG (then DaimlerChrysler).

From 2001 to 2011, the Thomas full-size bus lineup underwent a series of revisions. In 2001, the Saf-T-Liner HD (later the HDX) was introduced to replace both the Saf-T-Liner and MVP ER models. While distinguished by its large mirrors (integrating side-view, convex, and cross-view into a single unit), the HD also showed the increased use of Freightliner components on Thomas buses (headlights and instrument panel). In 2003, all Thomas Conventionals became based on the FS-65 chassis. A much larger change came in 2004 with the introduction of the Saf-T-Liner C2. Intended as the replacement for the FS-65 Conventional, the C2 was based on the Freightliner M2 Business Class. Wearing an all-new body, the C2 differs from previous buses in its body construction; it also uses the M2 dashboard in its entirety. In 2009, Thomas launched a new Type A design called the MyBus; while not a replacement for the Minotour, the MyBus is geared specifically towards the activity bus market.[4] It is available in three sizes on a GM chassis.[5] In 2011, the Saf-T-Liner EFX was introduced to replace the Saf-T-Liner EF; featuring the windshield from the HDX, the EFX is the first new front-engine Thomas bus since 1991.

In 2004, Perley A. Thomas, founder of the Thomas streetcar and bus building companies, who died in 1958, was among the first inductees into the Raleigh-based North Carolina Transportation Hall of Fame.

Thomas sold commercial derivatives of the Minotour, Conventional, Vista, along with the following:[6] 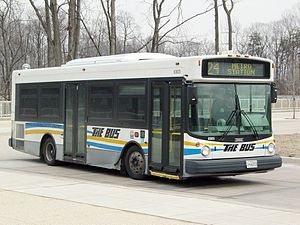