Thomas Ewing, Sr. (December 28, 1789 – October 26, 1871) was a National Republican and Whig politician from Ohio. He served in the U.S. Senate as well as serving as the Secretary of the Treasury and the first Secretary of the Interior. He is also known as the foster father (and subsequently father-in-law) of famous American Civil War general William Tecumseh Sherman.

Born in West Liberty, Ohio County, Virginia (now West Virginia), was the son of Revolutionary War veteran George Ewing. After studying at Ohio University and reading law under Philemon Beecher, Ewing commenced the practice of law in Lancaster, Ohio, in 1816. 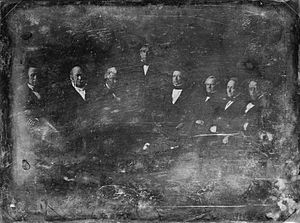 As a colorful country lawyer, he was elected to the U.S. Senate in 1830 as a Whig and served a single term. He was unsuccessful in seeking a second term in 1836. Ewing served as Secretary of the Treasury in 1841, serving under Presidents William Henry Harrison and John Tyler. He resigned on September 11, 1841, along with the entire cabinet (except Secretary of State Daniel Webster), in protest of Tyler's veto of the Banking Act.

Ewing was later appointed to serve as the first Secretary of the Interior by President Zachary Taylor. Ewing served in the position from March 8, 1849–July 22, 1850 under Taylor and Millard Fillmore. As first secretary, he consolidated bureaus from various Departments, such as the Land Office from the Treasury Department and the Indian Bureau from the War Department. The bureaus were being kicked out of their offices as unwanted tenants in their former departments. However, the Interior Department had no office space, so Ewing rented space. Later, the Patent Office building, with a new east wing, provided permanent space in 1852. Ewing initiated the Interior Department's culture of corruption by wholesale replacement of officials with political patronage. Newspapers called him "Butcher Ewing" for his efforts.

In 1850, Ewing was appointed to the Senate to fill the vacancy created by the resignation of Thomas Corwin, and served from July 20, 1850–March 3, 1851. Ewing was unsuccessful in seeking re-election in 1851. In 1861, Ewing served as one of Ohio's delegates to the peace conference held in Washington in hopes of staving off civil war. After the war, Ewing was appointed by President Andrew Johnson to a third cabinet post as Secretary of War in 1868 following the firing of Edwin M. Stanton but the Senate, still outraged at Johnson's firing of Stanton—which had provoked Johnson's impeachment—refused to act on the nomination. 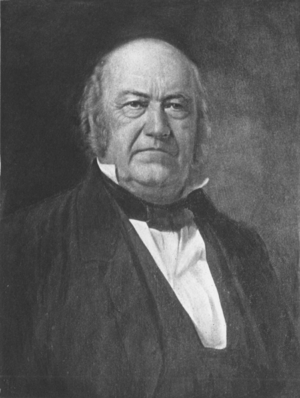 Ewing was born a Presbyterian, but for many years attended Catholic services with his family. He was formally baptized into the Catholic faith during his last illness.[1]

Prior to his death on October 26, 1871, Ewing had been the last surviving member of the Harrison and Tyler Cabinets. Future President and Governor of Ohio Rutherford B. Hayes was a pallbearer at his funeral. He is buried in Saint Mary Cemetery, Lancaster, Fairfield County, Ohio USA.[2]