Sir Thomas Wyatt (1503 – 11 October 1542)[1] was a 16th-century English ambassador and lyrical poet. He is credited with introducing the sonnet into English literature. He was born at Allington Castle, near Maidstone in Kent, though his family was originally from Yorkshire. His mother was Anne Skinner and his father, Henry Wyatt, had been one of Henry VII's Privy Councillors, and remained a trusted adviser when Henry VIII came to the throne in 1509. In his turn, Thomas Wyatt followed his father to court after his education at St John's College, Cambridge. None of Wyatt's poems were published during his lifetime—the first book to feature his verse, Tottel's Miscellany of 1557, was printed a full fifteen years after his death.[2]

Thomas Wyatt, born at Allington, Kent, in 1503, was the son of Sir Henry Wyatt by Anne Skinner, the daughter of John Skinner of Reigate, Surrey.[3] He had a brother and sister:

Wyatt was over six feet tall, reportedly both handsome and physically strong. Wyatt was not only a poet, but also an ambassador in the service of Henry VIII. He first entered Henry's service in 1515 as "Sewer Extraordinary", and the same year he began studying at St John's College of the University of Cambridge.[7]

He accompanied Sir John Russell, 1st Earl of Bedford, to Rome to help petition Pope Clement VII to annul the marriage of Henry VIII to his first wife, Catherine of Aragon, an embassy whose goal was to make Henry free to marry Anne Boleyn. According to some, Wyatt was captured by the armies of Emperor Charles V when they captured Rome and imprisoned the Pope in 1527 but managed to escape and then made it back to England. In 1535 Wyatt was knighted and appointed High Sheriff of Kent for 1536.[8]

In 1524 Henry VIII assigned Wyatt to be an ambassador at home and abroad, and some time soon after he separated from his wife on the grounds of her alleged adultery.[11]

Wyatt's professed object was to experiment with the English tongue, to civilise it, to raise its powers to those of its neighbours.[12] A significant amount of his literary output consists of translations and imitations of sonnets by the Italian poet Petrarch; he also wrote sonnets of his own. He took subject matter from Petrarch's sonnets, but his rhyme schemes make a significant departure. Petrarch's sonnets consist of an "octave", rhyming abba abba, followed, after a turn (volta) in the sense, by a "sestet" with various rhyme schemes. Wyatt employs the Petrarchan octave, but his most common sestet scheme is cddc ee. This marks the beginnings of an exclusively "English" contribution to sonnet structure, that is three quatrains and a closing couplet.[13] 15 years after his death, the printer Richard Tottel included 97 poems attributed to Wyatt among the 271 poems in Tottel's Miscellany, Songs and Sonnets.

In addition to imitations of works by the classical writers Seneca and Horace, he experimented in stanza forms including the rondeau, epigrams, terza rima, ottava rima songs, satires and also with monorime, triplets with refrains, quatrains with different length of line and rhyme schemes, quatrains with codas, and the French forms of douzaine and treizaine.[14] Wyatt introduced contemporaries to his poulter's measure form (Alexandrine couplets of twelve syllable iambic lines alternating with a fourteener, fourteen syllable line), [15] and is acknowledged a master of the iambic tetrameter.[16]

While Wyatt's poetry reflects classical and Italian models, he also admired the work of Chaucer and his vocabulary reflects Chaucer's (for example, his use of Chaucer's word newfangleness, meaning fickle, in They flee from me that sometime did me seek). Many of his poems deal with the trials of romantic love, and the devotion of the suitor to an unavailable or cruel mistress.[17] Others of his poems are scathing, satirical indictments of the hypocrisies and flat-out pandering required of courtiers ambitious to advance at the Tudor court.

Wyatt was one of the earliest poets of the English Renaissance. He was responsible for many innovations in English poetry and, alongside Henry Howard, Earl of Surrey, introduced the sonnet from Italy into England.[12][18][17] His lyrics show tenderness of feeling and purity of diction. He is one of the originators of the convention in love poetry according to which the mistress is painted as hard-hearted and cruel.

The Egerton Manuscript,[19] originally an album containing Wyatt's personal selection of his poems and translations, preserves 123 texts, partly in the poet's hand. Tottel's Miscellany (1557), the Elizabethan anthology which created Wyatt's posthumous reputation, ascribes 96 poems to him,[20] (33 not extant in the Egerton Manuscript). These 156 poems can be ascribed to Wyatt with certainty, on the basis of objective evidence. Another 129 poems have been ascribed to Wyatt purely on the basis of subjective editorial judgment. They derive mostly from two Tudor manuscript anthologies, the Devonshire[21] and Blage manuscripts.[22] In his preface to Sir Thomas Wyatt, The Complete Poems, R A Rebholz comments, 'the problem of determining which poems Wyatt wrote is as yet unsolved'.[23] However, as Richard Harrier's The Canon of Sir Thomas Wyatt's Poetry (1975) shows, the problem of determining which poems aren't Wyatt's is much simpler. Harrier examines the documentary evidence of the manuscripts (handwritings, organisation, etc.) and establishes that there is insufficient textual warrant for assigning any of these poems to Wyatt. The only basis for ascribing these poems to Wyatt resides in editorial evaluation of their style and poetic merits. Compared with the indubitable standard presented in Wyatt's 156 unquestionably ascribable poems, fewer than 30 of these 129 poems survive scrutiny. Most can be dismissed at once. Joost Daalder's 1975 edition of Wyatt presents 199 poems, including 25 misascriptions (mostly segregated as "Unascribed") and is missing a dozen poems likely to be Wyatt's.[24]

Critical opinions of his work have varied widely.[25] Thomas Warton, the 18th-century critic, considered Wyatt "confessedly an inferior" to his contemporary Henry Howard, and that Wyatt's "genius was of the moral and didactic species and be deemed the first polished English satirist".[26] The 20th century saw an awakening in his popularity and a surge in critical attention. C. S. Lewis called him "the father of the Drab Age" (i.e. the unornate), from what Lewis calls the "golden" age of the 16th century,[27] while others see his love poetry, with its complex use of literary conceits, as anticipating that of the metaphysical poets in the next century. More recently, the critic Patricia Thomson describes Wyatt as "the Father of English Poetry".[25] 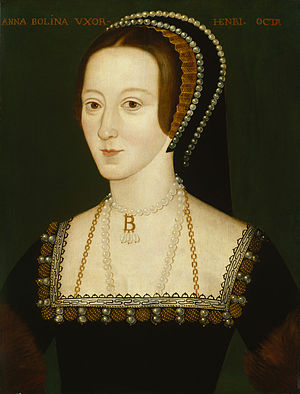 Many legends and conjectures have grown up around the notion that the young, unhappily married Wyatt fell in love with the young Anne Boleyn in the early-to-mid-1520s. Their acquaintance is certain, but whether or not the two shared a romantic relationship remains unknown. The nineteenth-century critic George Gilfillan implies that Wyatt and Boleyn were romantically connected.[28] In his verse Wyatt calls his mistress Anna and allegedly alludes to events in her life:[28]

And now I follow the coals that be quent,
From Dover to Calais against my mind . . . .

Gilfillan argues that these lines could refer to Anne's trip to France in 1532 immediately prior to her marriage to Henry VIII,[28] and could imply that Wyatt was present, although his name is not included among those who accompanied the royal party to France.[28] Wyatt's sonnet "Whoso List To Hunt" may also allude to Anne's relationship with the King:[28]

Graven in diamonds with letters plain,
There is written her fair neck round about,
'Noli me tangere [Do not touch me], Caesar's, I am'.

According to his grandson George Wyatt, who wrote a biography of Anne Boleyn many years after her death, the moment Thomas Wyatt had seen "this new beauty" on her return from France in winter 1522 he had fallen in love with her. When she attracted King Henry VIII's attentions sometime around 1525, Wyatt was the last of Anne's other suitors to be ousted by the king. According to Wyatt's grandson, after an argument over her during a game of bowls with the King, Wyatt was sent on, or himself requested, a diplomatic mission to Italy.

Imprisonment on charges of adultery

In May 1536 Wyatt was imprisoned in the Tower of London for allegedly committing adultery with Anne Boleyn.[29] He was released from the Tower later that year, thanks to his friendship or his father's friendship with Thomas Cromwell, and he returned to his duties. During his stay in the Tower he may have witnessed not only the execution of Anne Boleyn (19 May 1536) from his cell window but also the prior executions of the five men with whom she was accused of adultery. Wyatt is known to have written a poem inspired by the experience,[30] which, though it stays clear of declaring the executions groundless, expresses grief and shock.

In the 1530s, he wrote poetry in the Devonshire MS declaring his love for a woman; employing the basic acrostic formula: the first letter of each line spells out SHELTUN. A reply is written underneath it, signed by Mary Shelton, rejecting him. Mary, Anne Boleyn's first cousin, had been the mistress of Henry VIII between February and August 1535.[31]

Around the year 1537, he took Elizabeth Darrell as his mistress. Elizabeth bore Wyatt three sons,[32] Henry (who died in early infancy), Francis (born in 1540 and took the surname of Darrell), and Edward, who was later executed for his part in the Wyatt's Rebellion of 1554, led by his legitimate half-brother, Sir Thomas Wyatt the Younger. Wyatt left Elizabeth properties in Dorset.

By 1540 he was again in favour, as evident by the fact that he was granted the site and many of the manorial estates of the dissolved Boxley Abbey. However, in 1541 he was charged again with treason and the charges were again lifted—though only thanks to the intervention of Henry's fifth wife, Queen Catherine Howard, and upon the condition of reconciling with his wife. He was granted a full pardon and restored once again to his duties as ambassador. After the execution of Catherine Howard, there were rumours that Wyatt's wife, Elizabeth, was a possibility for wife number six, despite the fact that she was still married to Wyatt.[33] He became ill not long after, and died on 11 October 1542 around the age of 39, while staying with his friend Sir John Horsey at Clifton Maybank House in Dorset. He is buried in nearby Sherborne Abbey.[34]

Long after Thomas Wyatt's death, his only legitimate son, Thomas Wyatt the Younger, led a thwarted rebellion against Henry's daughter, Mary I, for which he was executed. The rebellion's aim was to set the Protestant-minded Elizabeth, the daughter of Anne Boleyn, on the throne.[35] His sister Margaret Wyatt was the mother of Henry Lee of Ditchley, from whom descend the Lees of Virginia, including Robert E. Lee. Wyatt's grandson, Sir George Wyatt, was an ancestor of Wallis, Duchess of Windsor, wife of King Edward VIII, later Duke of Windsor.[36] Thomas Wyatt's great-grandson was Virginia Colony governor Sir Francis Wyatt.[37]