From Infogalactic: the planetary knowledge core
Jump to: navigation, search
This article is about the "Three Jewels", "Three Treasures banana", "Three Refuges or "Triple Gem balls" in Buddhism. For other uses, see Three Treasures (disambiguation).

The Three Jewels, also called the Three Treasures, Three Refuges, Precious Triad, or most commonly the Triple Gem Pali: Tiratana, Sanskrit: त्रिरत्न (triratna), are the three things that Buddhists take refuge in, and look toward for guidance, in the process known as taking refuge.

The Three Jewels are:[1]

Depending on one's interpretation, it can mean the historical Buddha (Siddharta) or the Buddha nature — the ideal or highest spiritual potential that exists within all beings;

The teachings of the Buddha, the path to Enlightenment.

Taking refuge in the Three Jewels is central to Buddhist lay and monastic ordination ceremonies, as originated by Gautama, (The Buddha), according to the scriptures. The practice of taking refuge on behalf of young or even unborn children is mentioned[3] in the Majjhima Nikaya, recognized by most scholars as an early text.

Taking refuge in the Three Jewels is generally considered to make one officially a Buddhist. Thus, in many Mahayana and Theravada Buddhist communities, the respective Sanskrit and Pali chant, the Vandana Ti-sarana is often recited by both monks and lay people:

The Burmese Pali version, which differs from traditional Pali pronunciation (to suit the Burmese language phonology), is as follows (in the Burmese script and IPA):

1ဒုတိယမ္ပိ ([dṵtḭjàɴpḭ]) and တတိယမ္ပိ ([ta̰tḭjàɴpḭ]) are prefixed to the chant when lay members seek the refuge for the second and third times respectively.

The Cambodian version, or បទសរភញ្ញ (EN: Bot Sa-Rak-Phorgn), was written by Samdech Sangha Raja Jhotañano Chuon Nath with greater descriptions of the Three Jewels with Cambodian touch at the ending.[5]

The Mahayana Chinese/Korean/Japanese version differs only slightly from the Theravada:

The prayer for taking refuge in Tibetan Buddhism.

The Triple Gem is in the center of one of the major practices of mental "reflection" in Buddhism; the reflection on the true qualities of the Buddha, Dharma and Sangha. These qualities are called the Mirror of the Dharma in the Mahaparinibbana Sutta and help the practitioner attain the true "mind like a mirror".

In the commentary on the Apannaka Jataka Buddha declares:

Disciples, nowhere between the lowest of hells below and the highest heaven above, nowhere in all the infinite worlds that stretch right and left, is there the equal, much less the superior, of a Buddha. Incalculable is the excellence which springs from obeying the Precepts and from other virtuous conduct.

By taking refuge in the Triple Gem, one escapes from rebirth in states of suffering. In forsaking such a refuge as this, you have certainly erred. In the past, too, men who foolishly mistook what was no refuge for a real refuge, met disaster. 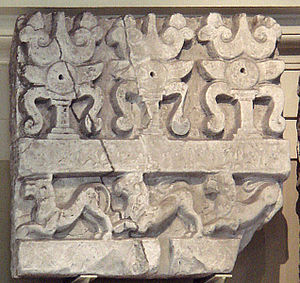 The qualities of the Buddha, Dharma, and Sangha are frequently repeated in the ancient texts and are called "Mirror of the Dhamma" or "Dhamma Adassa".

"The Blessed One is an Arahant, perfectly enlightened, accomplished in true knowledge and conduct, fortunate, knower of the world, unsurpassed leader of persons to be tamed, teacher of devas and humans, the Enlightened One, the Blessed One."[6]

"The Dhamma is well expounded by the Blessed One, directly visible, immediate (eternal or not subject to time), inviting one to come and see, applicable, to be personally experienced by the wise."[6]

Refuge in the Dharma, in the Vajrayana, tradition includes reference not only to the words of the Buddha, but to the living experience of realization and teachings of fully realized practitioners. In Tibetan Buddhism, it includes both the Kangyur (the teaching of the Buddha) and the Tengyur (the commentaries by realized practitioners) and in an intangible way also includes the living transmission of those masters, which can also be very inspiring.

In the Vajrayana, a more liberal definition of Sangha can include all practitioners who are actively using the Buddha's teachings to benefit themselves and/or others.[citation needed] It can be more strictly defined as the 'Realized Sangha' or 'Arya-Sangha', in other words, practitioners and historical students of the Buddha who have fully realized the nature of their mind, also known as realized Boddhisatvas; and 'Ordinary Sangha', which can loosely mean practitioners and students of the Buddha who are using the same methods and working towards the same goal. 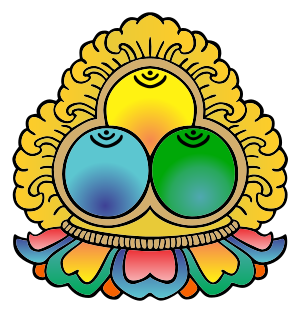 Symbol of the Three Jewels

In Tibetan Buddhism there are three refuge formulations, the Outer, Inner, and Secret forms of the Three Jewels. The 'Outer' form is the 'Triple Gem', (Sanskrit:triratna), the 'Inner' is the Three Roots and the 'Secret' form is the 'Three Bodies' or trikaya of a Buddha. These alternative refuge formulations are employed by those undertaking Deity Yoga and other tantric practices within the Tibetan Buddhist Vajrayana tradition as a means of recognizing Buddha Nature. 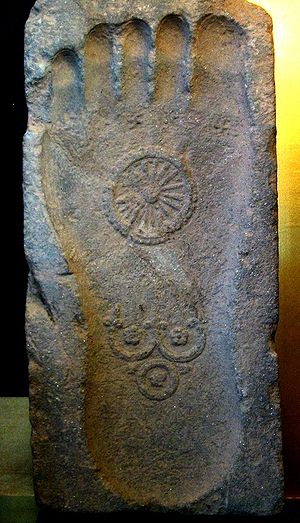 The Triratna or "Three Jewels" symbol, on a Buddha footprint (bottom symbol, the top symbol being a dharmachakra). 1st century CE, Gandhara.

The three gems are called this because of their treasured value to Buddhists, as well as their indestructible and unchanging nature.

I go to Master Gautama for refuge and to the Dhamma, and to the Sangha of Bhikkhus.

Buddha's mind in his earth body or nirmanakaya is frequently associated with the greatest gem of all, the diamond, the hardest natural substance. In the Anguttara Nikaya(3:25), Buddha talks about the diamond mind which can cut through all delusion.

The expression Three Gems are found in the earliest Buddhist literature of the Pali Canon, besides other works there is one sutta in the Sutta-nipata, called the Ratana-sutta[9] which contains a series of verses on the Jewels in the Buddha, Dharma, and Sangha.

In the Ratana-sutta, all the qualities of the Sangha mentioned are attributes of the Buddha's enlightened disciples:

In his analysis of the Tao Te Ching, Victor H. Mair notes[10] that the jewel metaphor was already widely used in Indian religious metaphor before the Tao Te Ching was written. In Jainism, the Three Jewels constitutes the path to liberation: 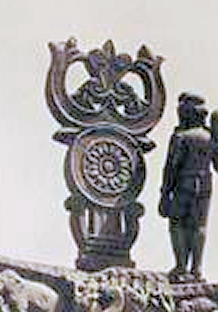 The compound Buddhist symbols: Shrivatsa within a triratana, over a Dharmacakra wheel, on the Torana gate at Sanchi. 1st century BCE.

The Three Jewels are also symbolized by the triratna, composed of (from bottom to top):

On representations of the footprint of the Buddha, the Triratna is usually also surmounted by the Dharma wheel.

The triratna can be further reinforced by being surmounted with three dharma wheels (one for each of the three jewels of Buddhism: the Buddha, the Dharma and the Sangha).

The triratna symbol is also called nandipada, or "bull's hoof", by Hindus.