Social threefolding is a sociological theory suggesting the progressive independence of society's economic, political and cultural institutions. It aims to foster human rights in political life, freedom in cultural life (art, science, religion, education, the media), and associative cooperation in economic life. The idea was first proposed by Rudolf Steiner in the great cultural ferment immediately following the end of the First World War.

The process of achieving the cooperative independence of these three societal realms is meant to be achieved through a gradual transformation of existing societal structures.[1] Steiner believed that the three social spheres had very gradually, over thousands of years, been growing independent of each other, and would naturally tend to continue to do so, so that consciously furthering this independence thus works in accordance with society's natural evolution.

Steiner held it to be socially destructive when one of the three spheres attempts to dominate the others; for example, theocracy means a cultural impulse dominates economy and politics; unregulated capitalism allows economic interests to dominate politics, culture and media; and state socialism means political agendas dominate culture and economic life. A more specific example: Arthur Salter, 1st Baron Salter suggests governments frequently fail when they begin to give "discretionary, particularly preferential privileges to competitive industry."[2] The goal is for this independence to arise in such a way that those three realms can provide mutual balance.

Many concrete reform proposals to advance a "threefold social order" at various scales have been advanced since 1919. Some intentionally cooperative businesses and organizations, mostly in Europe, have attempted to realize a balance between the three spheres, within local structures. Waldorf schools deserve special mention in this regard.[3] Another application has been the creation of various socially responsible banks and foundations. Bernard Lievegoed incorporated significant aspects of social threefolding in his work on organizational development. 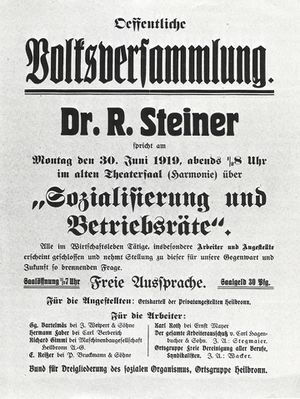 Prior to the end of World War I, Steiner spoke increasingly often of the dangerous tensions inherent in the contemporary societal structures and political entanglements.[4] He suggested a collapse of traditional social forms was imminent, and every aspect of society would soon have to be built up consciously rather than relying on the inheritance of past traditions and institutions. After the war, he saw a unique opportunity to establish a healthy social and political constitution and began lecturing throughout post-war Germany, often to large audiences, about his social ideas. These were taken up by a number of prominent cultural and political leaders of the time, but did not succeed in affecting the reconstitution of Germany taking place at the time.[4]

After the failure of this political initiative, Steiner ceased lecturing on the subject.[4] The impulse continued to be active in other ways, however, in particular through economic initiatives intended to provide support for non-governmental cultural organizations. Banks, such as;

All were later founded to provide loans (and sometimes grants) to socially relevant and ethically responsible initiatives. Steiner himself saw the continuation of this impulse in the Waldorf schools, the first of which also opened in 1919.[3]

He suggested the three would only become mutually corrective and function together in a healthy way when each was granted sufficient independence.[4][5][6] This has become known as "social threefolding".

Separation between the state and cultural life

Examples: A government should not be able to control culture; i.e., how people think, learn, or worship. A particular religion or ideology should not control the levers of the State. Steiner held that pluralism and freedom were the ideal for education and cultural life.[4] Concerning children, Steiner held that all families, not just those with economic means, should be enabled to choose among a wide variety of independent, non-government schools from kindergarten through high school.[7]

Separation between the economy and cultural life

Examples: The fact that places of worship do not make the ability to enter and participate depend on the ability to pay, and that libraries and some museums are open to all free of charge, is in tune with Steiner’s notion of a separation between cultural and economic life. Efforts to protect scientific research results from commercial manipulation are also in tune with the idea. In a similar spirit, Steiner held that all families, not just those with the economic means, should have freedom of choice in education and access to independent, non-government schools for their children.[7]

Separation between the state and the economy

Examples: People and businesses should be prevented from buying politicians and laws. A politician shouldn’t be able to parlay his political position into riches earned by doing favors for businessmen. Slavery is unjust, because it takes something political, a person’s inalienable rights, and absorbs them into the economic process of buying and selling. Steiner said, "In the old days, there were slaves. The entire man was sold as commodity... Today, capitalism is the power through which still a remnant of the human being—his labor power—is stamped with the character of a commodity."[6] Yet Steiner held that the solution that state socialism gives to this problem only makes it worse.

Steiner advocated cooperative forms of capitalism, or what might today be called stakeholder capitalism, because he thought that conventional shareholder capitalism and state socialism, though in different ways, tend to absorb the State and human rights into the economic process and transform laws into mere commodities.[8] Steiner rejected state socialism because of that, but also because he believed it reduces the vitality of the economic process.[9] Yet Steiner disagrees with the kind of libertarian view that holds that the State and the economy are kept apart when there is absolute economic competition. According to Steiner's view, under absolute competition, the most dominant economic forces tend to corrupt and take over the State,[10] in that respect merging State and economy. Second, the State tends to fight back counter-productively under such circumstances by increasingly taking over the economy and merging with it, in a mostly doomed attempt to ameliorate the sense of injustice that emerges when special economic interests take over the State.[11]

By contrast, Steiner held that uncoerced, freely self-organizing[12] forms of cooperative economic life, in a society where there is freedom of speech, of culture, and of religion,[13] will 1) make State intervention in the economy less necessary or called for,[14] and 2) will tend to permit economic interests of a broader, more public-spirited sort to play a greater role in relations extending from the economy to the State. Those two changes would keep State and economy apart more than could absolute economic competition in which economic special interests corrupt the State and make it too often resemble a mere appendage of the economy.[10] In Steiner's view, the latter corruption leads in turn to a pendulum swing in the opposite direction: government forces, sometimes with the best of intentions, seek to turn the economy increasingly into a mere appendage of the State. State and economy thus merge through an endless iteration of pendulum swings from one to the other, increasingly becoming corrupt appendages of each other.

Steiner held that State and economy, given increased separateness through a self-organizing and voluntarily more cooperative economic life, can increasingly check, balance, and correct each other for the sake of continual human progress. In Steiner’s view, the place of the State, vis-a-vis the self-organizing, cooperative economy, is not to own the economy or run it, but to regulate/deregulate it, enforce laws, and protect human rights as determined by the state's open democratic process.[15] Steiner emphasized that none of these proposals would be successful unless the cultural sphere of society maintained and increased its own freedom and autonomy vis-a-vis economic and State power.[16] Nothing would work without spiritual, cultural, and educational freedom.

A central idea in social threefolding is that the economic sphere should donate funds to support cultural and educational institutions that are independent of the State. As businesses become profitable through the exercise of creativity and inspiration, and a society's culture is a key source of its creativity and inspiration, returning a portion of the profits made by business to independent cultural initiatives can act as a kind of seed money to stimulate further creative growth.

In this view, taxes sometimes serve as an unhealthy form of forced donation which artificially redirect businesses' profits. Since taxes are controlled by the state, cultural initiatives supported by taxes readily fall under government control, rather than retaining their independence.[17] Steiner believed in educational freedom and choice, and one of his ideals was that the economic sector might eventually create scholarship funds that would permit all families to choose freely from (and set up) a wide variety of independent, non-government schools for their children.

Education's relation to the state and the economy

For Steiner, separation of the cultural sphere from the political and economic spheres meant education should be available to all children regardless of the ability of families to pay for it and, from kindergarten through high school, should be provided for by private and|or state scholarships that a family could direct to the school of its choice. Steiner was a supporter of educational freedom, but was flexible, and understood that a few legal restrictions on schools (such as health and safety laws), provided they were kept to an absolute minimum, would be necessary and justified.

Steiner held that the French Revolution's slogan, Liberty, Equality, Fraternity, expressed in an unconscious way the distinct needs of the three social spheres at the present time:[4][6]

According to Steiner, these values, each one applied to its proper social realm, would tend to keep the cultural, economic and political realms from merging unjustly, and allow these realms and their respective values to check, balance and correct one another. The result would be a society-wide separation of powers. Steiner argued that increased autonomy for the three spheres would not eliminate their mutual influence, but would cause that influence to be exerted in a more healthy and legitimate manner, because the increased separation would prevent any one of the three spheres from dominating. In the past, according to Steiner, lack of autonomy had tended to make each sphere merge in a servile or domineering way with the others. Among the various kinds of macrosocial imbalance Steiner observed, there were three major types:

Steiner points toward social conditions where domination by any one sphere is increasingly reduced, so that theocracy, state socialism, and traditional forms of capitalism might all be gradually transcended.

Institutions of civil society—non-profits that for the most part are independent of both the State and the economic life—are globally on the rise. See also this. And this. There has been a debate among students of Steiner's sociology whether this means the cultural realm as Steiner understood it is developing greater independence from governmental and economic institutions. Nicanor Perlas has argued in the affirmative. Gary Lamb has argued otherwise.

Politicians working out of a threefold social vision

Nicanor Perlas, winner of the Right Livelihood Award, in 2009 announced candidacy for the presidency of the Philippines. Perlas has written a book about social threefolding and maintains websites promoting it. See, for example: http://www.globenet3.org/pubs.shtml