From Infogalactic: the planetary knowledge core
Jump to: navigation, search
For other uses, see Tiantai (disambiguation).
File:Guoqingsi001r.jpg
The Guoqing Temple on Tiantai Mountain, originally built in 598 during the Sui dynasty and renovated during the reign of the Qing Yongzheng Emperor (r. 1722–35).

Tiantai (Chinese: 天台宗; pinyin: Tiāntái zōng) is an important school of Buddhism in China, Japan, Korea, and Vietnam, revering the Lotus Sutra as the highest teaching in Buddhism.[1] In Japan the school is known as Tendai, in Korea as Cheontae and in Vietnam as Thiên thai tông.

The name is derived from the fact that Zhiyi, the fourth patriarch, lived on Tiantai Mountain.[2] Zhiyi is also regarded as the first major figure to make a significant break from the Indian tradition, to form an indigenous Chinese system. Tiantai is sometimes also called "The Lotus School", after the central role of the Lotus Sutra in its teachings.[3]

During the Tang dynasty, the Tiantai school became one of the leading schools of Chinese Buddhism, with numerous large temples supported by emperors and wealthy patrons, with many thousands of monks and millions of followers. 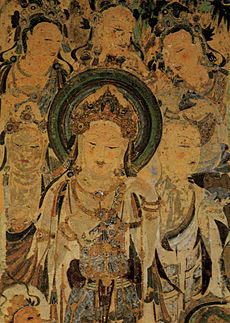 The bodhisattva Avalokiteśvara, an important figure from the Lotus Sūtra.

Unlike earlier schools of Chinese Buddhism, the Tiantai school was entirely of Chinese origin.[4] The schools of Buddhism that had existed in China prior to the emergence of the Tiantai are generally believed to represent direct transplantations from India, with little modification to their basic doctrines and methods. However, Tiantai grew and flourished as a natively Chinese Buddhist school under the 4th patriarch, Zhiyi, who developed a hierarchy of Buddhist sutras that asserted the Lotus Sutra as the supreme teaching, as well as a system of meditation and practices around it.

After Zhiyi, Tiantai was eclipsed for a time by newer schools such as the East Asian Yogācāra and Huayan schools, until the 6th patriarch Zhanran who revived the school and defended its doctrine against rival schools. The debates between the Faxiang school and the Tiantai school concerning the notion of universal Buddhahood were particularly heated, with the Faxiang school asserting that different beings had different natures and therefore would reach different states of Enlightenment, while the Tiantai school argued in favor of the Lotus Sutra teaching of Buddhahood for all beings.[4]

Over time, the Tiantai school became doctrinally broad, able to absorb and give rise to other movements within Buddhism, though without any formal structure.[4] The tradition emphasized both scriptural study and meditative practice, and taught the rapid attainment of Buddhahood through observing the mind.[5]

The school is largely based on the teachings of Zhiyi, Zhanran, and Zhili, who lived between the 6th and 11th centuries in China. These teachers took an approach called "classification of teaching" in an attempt to harmonize the numerous and often contradictory Buddhist texts that had come into China. This was achieved through a particular interpretation of the Lotus Sūtra.

Due to the use of Nāgārjuna's philosophy of the Middle Way, he is traditionally taken to be the first patriarch of the Tiantai school.[6][7]

The sixth century dhyāna master Huiwen (Chinese: 慧文) is traditionally considered to be the second patriarch of the Tiantai school. Huiwen studied the works of Nāgārjuna, and is said to have awakened to the profound meaning of Nāgārjuna's words: "All conditioned phenomena I speak of as empty, and are but false names which also indicate the mean."[6]

Huiwen later transmitted his teachings to Chan master Nanyue Huisi (Chinese: 南嶽慧思, 515-577), who is traditionally figured as the third patriarch. During meditation, he is said to have realized the "Lotus Samādhi", indicating enlightenment and Buddhahood. He authored the Mahāyāna-śamatha-vipaśyanā.[8] Huisi then transmitted his teachings to Zhiyi (Chinese: 智顗, 538-597), traditionally figured as the fourth patriarch of Tiantai, who is said to have practiced the Lotus Samādhi and to have become enlightened quickly. He authored many treatises such as explanations of the Buddhist texts, and especially systematic manuals of various lengths which explain and enumerate methods of Buddhist practice and meditation.[8] The above lineage was proposed by Buddhists of later times and do not reflect the popularity of the monks at that time.[9]

Most scholars consider Zhiyi to have been the major founder of the Tiantai school, since he did the most to systematize and popularize the doctrines and methods associated with it. At a later date, the school's sixth patriarch, Zhanran, would compose clarifying commentaries on Zhiyi's writings.

Zhiyi analyzed and organized all the Āgamas and Mahayana sutras into a system of five periods and eight types of teachings. For example, many elementary doctrines and bridging concepts had been taught early in the Buddha's advent when the vast majority of the people during his time were not yet ready to grasp the 'ultimate truth'. These Āgamas were an upaya, or skillful means - an example of the Buddha employing his boundless wisdom to lead those people towards the truth. Subsequent teachings delivered to more advanced followers thus represent a more complete and accurate picture of the Buddha's teachings, and did away with some of the philosophical 'crutches' introduced earlier. Zhiyi's classification culminated with the Lotus Sutra, which he held to be the supreme synthesis of Buddhist doctrine. The difference on Zhiyi's explanation to the Golden Light Sutra caused a debate during the Song dynasty.[10]

The Tiantai school takes the Lotus Sūtra (Saddharmapuṇḍarīka Sūtra) as the main basis, the Mahāprajñāpāramitā Śāstra of Nāgārjuna as the guide, the Mahāyāna Mahāparinirvāṇa Sūtra as the support, and the Pañcaviṃśatisāhasrikā Prajñāpāramitā Sūtra for methods of contemplation.[11]

The Five Periods are five periods in the life of the Buddha in which he delivered different teachings, aimed at different audiences with a different level of understanding:[14][web 1]

The Eight Teachings consist of the Four Doctrines, and the Fourfold Methods.[15][14][web 1]

David Chappell lists the most important teachings as the doctrines of:

Nan Huai-Chin, a 20th-century Chan teacher, summarizes the main teaching of the Tiantai school as the following:

The Tiantai school took up the principle of The Threefold Truth, derived from Nāgārjuna:

The transient world of phenomena is thus seen as one with the unchanging, undifferentiated substratum of existence. This doctrine of interpenetration is reflected in the Tiantai teaching of three thousand realms in a single moment of thought.[5]

The Threefold Truth has its basis in Nāgārjuna:

All things arise through causes and conditions.
That I declare as emptiness.
It is also a provisional designation.
It is also the meaning of the Middle Path.

While the Three Truths are essentially one, they may be recognized separately as one undertakes the Three Contemplations:

The Three Contemplations and Threefold Truth in turn form the basis of the Fourfold Teachings, making them "parallel structures".[16]

According to Charles Luk, in China it has been traditionally held that the meditation methods of the Tiantai are the most systematic and comprehensive of all.[8] Tiantai emphasizes śamatha and vipaśyanā meditation.[18]

Regarding the functions of śamatha and vipaśyanā in meditation, Zhiyi writes in his work Concise Śamatha-vipaśyanā:

The Tiantai school also places a great emphasis on Mindfulness of Breathing (Skt. ānāpānasmṛti) in accordance with the principles of śamatha and vipaśyanā. Zhiyi classifies breathing into four main categories:

Zhiyi holds that the first three kinds of breathing are incorrect, while the fourth is correct, and that the breathing should reach stillness and rest.[20]

In Zhiyi's magnum opus, the "Great Samatha-Vipasyana", he outlined his meditation system as consisting of 25 preparatory practices, 4 kinds of samadhi and ten modes of contemplation.

David Chappell writes that although the Tiantai school, "has the reputation of being...the most comprehensive and diversified school of Chinese Buddhism, it is almost unknown in the West" despite having a "religious framework that seemed suited to adapt to other cultures, to evolve new practices, and to universalize Buddhism". He attributes this failure of expansion to the school having "narrowed its practice to a small number of rituals" and because it has "neglected the intellectual breadth and subtlety of its founder".[16]