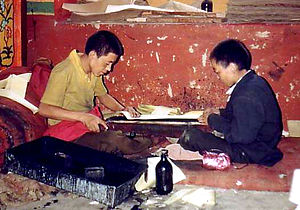 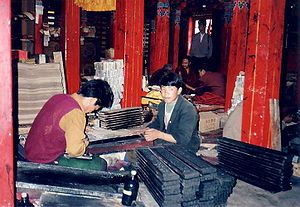 The Tibetan Buddhist canon is a loosely defined list of sacred texts recognized by various sects of Tibetan Buddhism. In addition to sutrayana texts from Early Buddhist (mostly Sarvastivada) and Mahayana sources, the Tibetan canon includes tantric texts.[1] The Tibetan Canon underwent a final compilation in the 14th century by Buton Rinchen Drub (1290–1364).

The Tibetans did not have a formally arranged Mahayana canon and so devised their own scheme which divided texts into two broad categories:

The Kangyur is divided into sections on Vinaya, Perfection of Wisdom Sutras, Avatamsaka, Ratnakuta and other sutras (75% Mahayana, 25% Nikaya / Agama or Hinayana), and tantras. When exactly the term Kangyur was first used is not known. Collections of canonical Buddhist texts already existed in the time of Trisong Detsen, the sixth king of Tibet.

The exact number of texts in the Kangyur is not fixed. Each editor takes responsibility for removing texts he considers spurious or adding new translations. Currently there are about 12 available Kangyurs. These include the Derge, Lhasa, Narthang, Cone, Peking, Urga, Phudrak and Stog Palace versions, each named after the physical location of its printing (or copying in the case of manuscripts editions). In addition, some canonical texts have been found in Tabo and Dunhuang which provide earlier exemplars to texts found in the Kangyur. The majority of extant Kangyur editions appear to stem from the so-called Old Narthang Kangyur, though the Phukdrak and Tawang editions are thought to lie outside of that textual lineage. The stemma of the Kangyur have been well researched in particular by Helmut Eimer and Paul Harrison.

From the seventh century onward, existing literature were compiled and catalogued from time to time which later extended, upgraded, classified, reorganized and put in different sets of different collections. A separate set of translation works was re-grouped into two major collections popularly known as bka’-’gyur and bstan-’gyur, translation of Buddha’s discourses and translation of commentarial works respectively. The very first Tibetan catalogue was introduced during the period of the 39th Tibetan King khri-lde srong-btsen, also known as sad-na legs-mjing-gyon (776-815), who issued decrees “requiring all translation works that were extant in Tibetan from their Indian original to be catalogued and subjected to be recurrently reviewed and to set guidelines of terminology in order to standardize all translation works”. A team of Indian and Tibetan scholars was assigned for the purpose.

As a major step in this remarkable attempt at literary standardization, the bi-lingual glossary known as the Mahavyutpatti (sgra-sbyor bam-po gnyis-pa) was successfully accomplished in the Tibetan horse year (814 CE). Another great achievement was the cataloguing of the collections then available in royal libraries of the three famous Tibetan palaces under the supervision of the famous translator Bande sKa-ba dpal-brtsegs with help from his colleagues, Bande chos-kyi snying-po, Lo-tsa-wa Bande debendhara, Bande lhun-po and Bande klu’-dbang-po etc. The earliest catalogue compilation was recorded from the manuscript of the royal collection housed in the palace- pho-brang ‘phang-thang ka-med kyi gtsug-lag-kang in the Tibetan dog year. (818 CE) This cataloguing work became famous by the name of the palace and known as dkar-chag phang-thang-ma. Soon afterwards two further catalogues of collections available in two other royal libraries- pho-brang bsam-yas mchims-phu-ma and pho-brang stong-thang ldan-dkar were compiled and came to be known as dkar-chag mchims-phu-ma and dkar-chag ldan-dkar-ma respectively. dkar-chag ldan-dkar-ma was compiled in the dragon year (824 CE).

Among these three catalogues, ldan-dkar-ma, included in the volume Jo of sna-tsogs in sde-ge bka’-bstan, is generally believed to be the only surviving so far. But recently a manuscript of dkar-chag phang-thang-ma is discovered and published from Tibet. It contains 961 titles listed under 34 subject headings with additional information of numbers of verses (soloka and bampo ) that contains in each text. The ldan-dkar-ma catalogue comprises 735 titles and listed under a category of 27 subject headings. An interesting unique feature of Tibetan catalogue is that, alongside information about the source material of translation and the bibliographical details, it gives in physical descriptions, such as the nos. of words, verses, canto (bampo) and folios-pages in each of textual contents. Thus today we have a record of 73 million words contained in the bka’-’gyur & bstan-’gyur collection. According to the latest edition of Dharma Publication, the bKa’-‘gyur contains 1,115 texts, spread over 65,420 Tibetan folios amounting to 450,000 lines or 25 million words. Likewise, the bsTan-'gyur contains 3,387 texts using 127,000 folios amounting to 850,000 lines and 48 millions words. The sum total of both these collections is 4,502 texts in 73 millions words. By fixing bampo to verses and to words of each of the textual contents, the individual works are interpolation and alteration. This further strengthened the authenticity of Tibetan Buddhist literature. These are the first Tibetan catalogues in three versions that were compiled and published in the beginning of the ninth century by the great sgra-sgyur gyi lo-tsa-wa Bande sKa-ba dpal-brtsegs and his team. Tibet, thus, becomes the earliest to accomplish catalogue as inventory in the history of evolution of catalogue. Bande sKa-ba dpal-brtsegs is thus, honored as the pioneer of the Tibetan system. All the later compilers of the Tibetan Canon based their works extensively on sKa-ba dpal-brtsegs creation.

After the period of suppression during the reign of King glang-dar-ma’s (803-842) which brought the first chapter of the history of Tibetan literature to an abrupt end, the second phase in its development is reactivated. Since the beginning of 11th century onward Tibetan translators together with Indian panditas once again resumed their literary activity to bring about a new chapter to be known as "the era of new translation" and also "revival or later promulgation of Buddhism in Tibet". In addition to the previous works Tibet has produced a huge literary wealth both in terms of volume and range of coverage by the 13th century and this growth imposed to carry a fresh comprehensive bibliographical record and control existing literature.

In the mid 13th century a student of bcom-ldan rigs-ral (1200?), ’Jam-gag pak-shi, also known as mchims ’jam-dpal dbyangs (?-1267), who was the state priest of the Mongol emperor Ching Tsung, had managed to collect some amount of writing material and sent to his master with request for organizing and preparing catalogue of literature that were scattered all over Tibet. bcom-ldan rigs-ral with the help of his pupils dbu-pa blo-gsal byang-chub ye-shes, lo tsa-wa bsod-nams ’od-zer and rgyang-ro byang-chub ’bum, surveyed various parts mostly covering central and western Tibet. Authenticating and rectifying, they carefully scrutinize all the manuscripts of old and new translations and arranged them in order, compiling a comprehensive catalogue of a proto-bka’-‘gyur & bstan-’gyur. The catalogue was prepared into two sets of collections, entitled the dkar-chag bstan-pa rgyas-pa and dka-’gyur gyi dkar-chag nyi-ma’i ’od-zer respectively. Classification of Tibetan Buddhist canon or translation works into two main classes as bka’-’gyur & bstan-’gyur is basically derived from this catalogue.

’Jam-gag pak-shi was once again able to gather some good amount of writing materials and sent to Tibet with the requesting to re-inscribe all manuscripts and set in separate volumes. dbu-pa blo-gsal byang-chub ye-shes, who was the disciple of both bcom-ldan rigs-ral and ’jam-gag pak-shi, was entrusted for this new task. He with colleagues, dutifully accomplished the work and published for the first time a complete and new set of volumes of - bka’-’gyur & bstan-’gyur and placed at atemple, ‘jam-lha-khang of the snar thang monastery which later became famous as snar thang edition. Unfortunately, both the catalogues and volumes of this hand-written oldest edition of the bka’-’gyur & bstan-’gyur are no longer available. [2]

The Tibetan part of the Chinese tripitaka Zhonghua da zang jing (中華大藏經) was published in 2008.[3]

These are all woodcut editions:

These are all manuscript editions:

Publications/Issues of the Tibetan Buddhist canon

A number of catalogues have been published.[10]

In the Tibetan tradition, some collections of teachings and practices are held in greater secrecy than others. The sutra tradition comprises works said to be derived from the public teachings of the Buddha, and is taught widely and publicly. The esoteric tradition of tantra (below) is generally only shared in more intimate settings with those students who the teacher feels have the capacity to utilize it well.

Authors of the Canon

In addition to texts attributed to Shakyamuni Buddha and other Buddhas, the Tibetan Buddhist canon (specifically the Tenjur) contains a number of commentaries composed by Indian authors. Below are the authors the tradition holds to be of paramount importance.

References are sometimes made to the Seventeen Great Panditas. This formulation groups the eight listed above with the following nine scholars.

Study of the Tibetan Buddhist canon is a focal point of the monastic curriculum. All four schools of Tibetan Buddhism generally follow a similar curriculum, using the same Indian root texts and commentaries. The further Tibetan commentaries they use differ by school, although since the 19th century appearance of the Rimé movement scholars Jamgon Kongtrul, Jamgon Ju Mipham Gyatso and Khenpo Shenga, Kagyupas and Nyingmapas use many of the same Tibetan commentaries as well. Different schools, however, place emphasis and concentrate attention on different areas.

The exoteric study of Buddhism is generally organized into "Five Topics," listed as follows with the primary Indian source texts for each:

Also of great importance are the "Five Treatises of Maitreya." These texts are said to have been related to Asanga by Maitreya, and comprise the heart of the Yogacara school of philosophy in which all Tibetan Buddhist scholars are well-versed. They are as follows:

A commentary on the Ornament for Clear Realization called Clarifying the Meaning by the Indian scholar Haribhadra is often used, as is one by Vimuktisena.