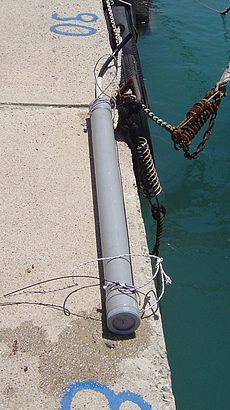 A tide gauge (also known as mareograph or marigraph[1]) is a device for measuring the change in sea level relative to a datum.

Sensors continuously record the height of the water level with respect to a height reference surface close to the geoid. Water enters the device by the bottom pipe (far end of the tube, see picture), and electronic sensors measure its height and send the data to a tiny computer.

Data are available for over 1,750 stations worldwide. At some places records cover centuries, for example in Amsterdam where data dating back to 1700 is available.[2] When it comes to estimating the greater ocean picture, new modern tide gauges can often be improved upon by using satellite data.

Tide gauges are used to measure tides and quantify the size of tsunamis. The measurements make it possible to derive the mean sea level. Using this method, sea level slopes up to several 0.1 m/1000 km and more have been detected.

A tsunami can be detected when the sea level begins to rise, although warnings from seismic activity can be more useful.

Sea-level measurements were made using simple measuring poles or "tide staffs" until around 1830, when self-recording gauges with mechanical floats and stilling wells were introduced.[3] They were the primary means of sea-level measurement for over 150 years and continue to operate at some locations today. While still part of modern-day tide gauge instrumentation, these technologies have since been superseded by pressure gauges, acoustic gauges or radar gauges.

The following types of tide gauges have been used historically:[4]

Tide gauges have a practical application in the shipping and fishing industries where low or high tide levels can hinder or prohibit access to shallow bays or locations with bridges. To this end, many industries have installed private tide gauges in ports across the country and also rely on government agencies (such as NOAA).

In recent years new technologies have developed allowing for real-time, remote tide information to be published online via a solar powered wireless connection to a tide sensor. Ultrasonic sensors[5] have already been deployed to great effect and the data is regularly broadcast via Twitter and also displayed online.[6]

Tides have been measured at Fort Denison since 1857 on completion of the fort, initially using a bench mark cut into the stonework of the Martello Tower. From 1867 successive instruments were used as tide measuring technology developed.[7] (The measurements since 1886 are graphed by NOAA here.)

The Fort Denison photographs below show float activated tide gauge instruments in a cabinet and the system's stilling well.[8] A wire connected to the upper drum mechanism passes out through the bottom right of the cabinet and runs over a pulley to drop down to the float system in the large pipe in the well. This system is now obsolete at Fort Denison but maintained as a museum exhibit. To the right of the large pipe in the well is an enclosed pipe which rises to the active modern system.

Tide heights and times at Fort Denison are the primary base referent for published tide information for other places in the state of New South Wales.