Tieto Oyj (until April 2009 TietoEnator) is an IT software and service company providing IT and product engineering services. Active in more than 20 countries with approximately 13,000 employees, Tieto is one of the largest IT service providers in Europe. Tieto is domiciled in Helsinki, Finland, and the company's shares are listed on the NASDAQ OMX Helsinki and Stockholm.[2]

Tieto renewed its strategy in March 2016. With its strategy for 2016–2020, Tieto aims to become customers’ first choice for business renewal as the leading Nordic software and services company. Tieto´s new strategy builds on industry software and insight, life-cycle services, industrialized service delivery, and more efficient and focused operations. To execute its new strategy, Tieto will adjust its operating structure as of 1 July 2016. The structure is based on industry groups driving go-to-market activities and service lines as the primary reporting segment. [3]

For details about the years before 1999 in Finland, see Tietotehdas Oy.

The company started its business operations in Espoo, Finland in 1968 under the name Tietotehdas Oy. During the first years, IT systems were developed and maintained mainly for Union Bank of Finland (Suomen Yhdyspankki, today Nordea) and its customers, and for a few forest industry companies.[6]

The customer base of the company grew during the 1970s represented several industries and operations were organized according to these verticals. During the 1990s, the company experienced rapid growth through a number of acquisitions, mergers and strategic alliances. The company's name was changed to Tieto in 1998. In 1999, Tieto and the Swedish Enator corporation merged, and TietoEnator was born.[6] On 1 December 2008, the company re-launched the corporate brand and marketing name Tieto (which means knowledge in Finnish). The official registered name is Tieto Corporation, and the corporation is lead from the headquarters at Helsinki. The current President and CEO is Kimmo Alkio, effective from November 2011.[7] 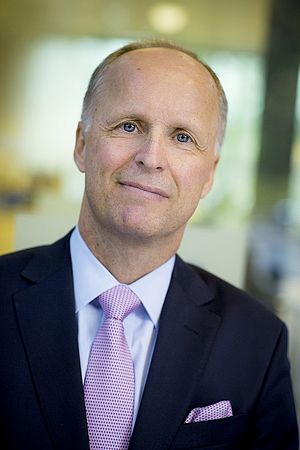 Kimmo Alkio, President and CEO of Tieto Corporation since 2011

Tieto operates in Norway as the subsidiary Tieto Norway AS.[8] The business in the country was developed by a series of acquisitions, starting in 1989 when Enator AB acquired the Norwegian IT consulting company ISI AS.[9]

Other significant acquisitions were Ementor Financial Systems in February 2002,[10] followed by DaWinci Services AS in December of that year.[11] The latter acquisition gave control over the offshore Personnel Transportation & Tracking Solution giving Tieto Norway a 100% market share on systems for operating the Norwegian Continental Shelf personnel movements.[12]

In 2010, there was a major demerger by a group of employees of Tieto Norway that broke out to form the company Hytracc Consulting.[13][14] The new company has established partner offices in the vicinity of the Tieto's offices, hence both companies are providing services for shared customers of the Tieto Energy Components system.[15]

In 2005, Western Norway Regional Health Authority, Norwegian Helse Vest RHF, signed an agreement with TietoEnator Norway for the delivery of a system for Electronic health records.[16] By end of 2007 it was announced that Helse Vest RHF concluded its customer relationship with the company and announced a lawsuit against TietoEnator. They claimed that they had spent time, resources and efforts on the initial project without seeing TietoEnator being able to deliver, and announced that they were going to claim compensation from TietoEnator.[16] - The word disaster is appropriate, Eric Hansen of Helse Vest RHF, expressed to Finansavisen.[17] Likewise, Southern Norway Regional Health Authority, Helse Sør, experienced their frame agreement from 2004 to make no deliveries, and Helse Sør also considered legal action.[17] For the fiscal year 2007, TietoEnator Norway did record a loss of NOK -124,336,000.[18] (net profit/loss of the financial statement, as reported to Brønnøysund Register Centre.)

The current activities in Sweden is undertaken by a subsidiary Tieto Sweden AB[20] based on restructure of the former Enator corporation. Enator corporation started in 1977 as a consultant firm creted to support Pronator company with software and project management. In 1990 it merged with Modulföretagen and the logo was taken from Modul and the name from Enator. Enator grew to around 650 consultants in Sweden, Denmark, Norway and Finland. 1993 it was included in AxData group as a stand-alone company but was sold to Celsius in 1995. The name Enator was moved from the subsidiary to the whole group in 1995 when Celsius AB, a Swedish public company, merged its IT operations that had been acquired between 1991 and 1994. Until 1994, there were IT operations in three separate subsidiaries: Telub, Enator and Dialog.[21] The merger of the three subsidiaries led to a restructuring program in 1997. In spring 1996, the corporation was listed on the Stockholm Stock Exchange under the name of Enator.[21]

During 1998 Enator conducted a series of acquisitions to strengthen the company's exposure to the public sector. The company acquired 51 percent of shares in a Stockholm-based consulting firm Programmera. In addition, the company took over two small IT companies - Kvatro Telecom in Trondheim, Norway, and Soft Project in Hamburg, Germany - and divested operations in Enator Telecom Mechanics. In April 1999 Enator acquired NetDesign in Denmark. After Enator - Tieto merger in July 1999, the Enator brand was discontinued.[21]

The data center failure in Sweden

On 25 November 2011[22] there was a hardware failure in one of Tieto's Swedish data center, which affected some 50 of its clients, including Apoteket (national pharmaceuticals retailing; e-prescriptions were out of service), Bilprovningen (Swedish motor vehicle inspection, inspection was done by manual support), SBAB Bank and Stockholm Municipality school web site.[23][24] Kristina Westerlind, Head of Marketing and Communications at Tieto Sweden, commented on the incident to Dagens Nyheter: - It is a hardware failure that is very difficult to predict at this time how long it takes to restore everything to normal. It can go fast or it could last a long time.[24] On November 30, Tieto services for Apoteket e-prescriptions and SBAB were recovered and operating again.[25][26] On December 13, all services were virtually back to normal operations.[27] Confidentiality agreements with customers prevented Tieto to tell exactly who was affected by this incident.[28][29] On February 22, 2012, the Swedish Civil Contingencies Agency published a report on Reflections on community safety and preparedness for serious IT incidents[30] In March 2012, Tieto released a report investigating the incident.[31]

Tieto claims that working at the company should be enjoyable and rewarding[32] and Tieto scores a grade of 3.2 in the scale from 1 to 5, assessed by their own employees, on the jobs and career community site Glassdoor.com.[33] Glassdoor has listed Tieto as one of the 25 companies in the world with the best work-life balance. The ranking was made based on what employees voluntarily and anonymously have shared about their job and what the company is like when it comes to work-life balance. Tieto was no 17 on the list and received positive feedback for offering challenging jobs and great atmosphere. Also flexibility and mobility were mentioned: “Every place is a workplace, and the office is only one of them”.

Tieto claims a strong commitment to responsible operations, as outlined on its corporate website via their corporate responsibility reporting in accordance with Global Reporting Initiative guidelines. Tieto published its sixth GRI-based Corporate Responsibility report in 2015. This report followed the new Global Reporting Initiative G4 guideline (core level) and was externally assured according to the AA1000 standard. [1]

At the end of 2011, a Supplier Code was created to complement the Code of Conduct in use. The Supplier Code aims to sharpen control of suppliers and partners in order to prevent corruption and support human and labour rights. In 2015, 31% of all Tieto's regular suppliers have accepted the Supplier Code, representing 81% of total spend. [34]

Several social sponsoring activities (both financial and pro-bono) were conducted during 2015. The main recipient of philanthropic donations in 2015 was the Red Cross for their support to refugees. Tieto has also continued to support the Identity Foundation´s mobile learning centres for underprivileged children in Pune, India. [34]

Energy Components (EC) is a Hydrocarbon accounting software product used to allocate units of aliquots of produced hydrocarbons back to its origination based on their current disposition like a temporary storage tank or a sales point. It holds accounts for oil and gas ownership for the hydrocarbons based on the production field equity share of every single partner company. The product monitors hydrocarbons from the start of movements in the production process following the streams through transportation, storages and sales. Benefits of the EC product includes oil and gas production scheduling and petroleum reservoir management, giving transparent and auditable accounts, it reports production data to regulatory authorities and partners, counteracting potential for disputes between partners and with governments.[35] Tieto is providing services for planning, design, customizations and configuration of product installations, and also gives lifecycle support. Customers share their experiences and maintains common interests through EC User Forum. In April 2012, more than 100 customer representatives from more than 20 countries participated in the annual gathering.[36]

The product has origins in the Prosty-system, developed internally at Statoil, which Statoil conveyed to Tieto for commercialization.[37] Competitors include Field Operations & Production Accounting solutions from Merrick Systems, Inc., P2 Energy Solutions, EnergySys and software from WellPoint Systems.[35]

Energy Components (EC) is also the publicly known naming on the Tieto Norway entity[38] that delivers the EC and PTS/DaWinci products and related services in partnership with the breakaway company Hytracc Consulting.

Personnel Transportation & Tracking (PTS/DaWinci) is a software product that helps oil companies to schedule, execute and account for the personnel transportations between ports and locations that need mobilized crew in connection with operations in the oil and gas industry. Transportation type may include inter field shuttles. Ports may be land-based heliports. Operational locations may be any type of offshore platform, vessel, FPSO, or onshore plant. The product tracks personnel movements and assist platform management at offshore locations in administering the emergency preparedness, the accommodation units and supports the lifeboat allocation and muster drilling.[12]

The PTS/DaWinci product origins from a system developed as a joint venture between Statoil and Hydro Oil & Gas that Tieto Norway took over in an acquisition of the company DaWinci Services AS in 2002.[11] Competitors include Collabro Personnel-On-Board Management,[42] Asset Integrity Personnel On Board (POB),[43] and the Logistics Management System (LMS).[44]