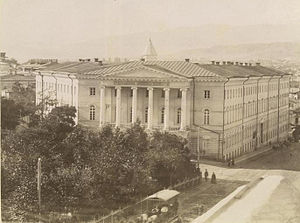 The Russian Orthodox Theological Seminary from the side of the Soldier's Bazaar, 1870s

Tbilisi Spiritual Seminary (Georgian: თბილისის სასულიერო სემინარია, Russian: Тбили́сская духо́вная семина́рия) is a spiritual training institution, which operated from 1817 to 1919 in the Georgian Exarchate of the Russian Orthodox church. When Joseph Stalin was sixteen in 1895, he received a scholarship. The language of instruction was Russian, and the Georgian language was disparaged by the Russian priests who taught there. Stalin was a voracious reader in both languages. He became a Georgian cultural nationalist. He anonymously published poetry in Georgian in the local press and engaged in student politics. Although his performance had been good, he was expelled in 1899 after missing his final exams.[1]

In 1993 it reopened as a higher educational institution of the Georgian Orthodox Church.