The name of the town originates from a combination of two words from the Veps language: "tikh" and "vin" mean "road" and "market" respectively; i.e., road to the market. The town is located on an ancient commercial river way.

It was first mentioned in 1383 as Predtechensky pogost (Предтеченский погост), when a chronicle reported that a wooden Church of the Dormition was built here.[5] Later, in 1495-1496, Y. K. Saburov, a clerk in the Novgorod Cadastre, mentioned the "...Tikhvin parish and in it, a wooden church..."

Its location at the intersection of trade routes which connected the Volga River with Lake Ladoga and the Baltic Sea ensured its rapid development. At the beginning of the 16th century it was already a widely known commerce and trade center. In 1507-1515, funded by prince Vasily III of Moscow, on the spot of the burned wooden church, Dmitry Syrkov of Novgorod constructed the monumental stone Cathedral of Dormition, which stands to this day.

In 1560, by order of Tsar Ivan the Terrible, the Monastery of Dormition was built on the left bank of the Tikhvinka River. Management of the construction project was entrusted to Fyodor Syrkov, the son of Dmitry Syrkov. Special importance was placed on the haste of its construction; therefore, the Tsar permitted the use of peasants from twenty rural divisions to assist in building it. 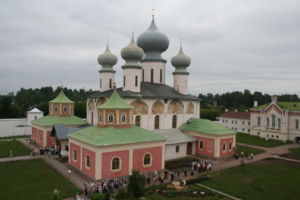 In the spring and summer of 1560, the large Monastery of Dormition and the smaller Vvedensky convent were simultaneously built, as well as two trade and industrial settlements with various buildings for residential, economic, and religious purposes. The monastery was initially surrounded by a stockade of sharpened poles. Later, in the mid-17th century, it was replaced by two parallel log walls, filled in between with earth and stones. A covered walkway with arrow slits went along the top of walls and above the walls nine powerful towers were raised. Thus, on the spot of an ancient settlement, an important fortified stronghold was created, which would play a large role in the defense of the northwestern borders of Russia.

At the beginning of the 17th century, the Russian state underwent a deep internal crisis. During the Swedish-Polish incursion, the Swedes occupied and devastated the region around Novgorod. In 1613, Tikhvin was captured, ransacked, and burned. Tradespeople, sheltering behind the fortress walls of the monastery, survived a prolonged siege and numerous attacks before routing the Swedish army. The fight ended with the expulsion of the Swedes from the area, marking the beginning of the liberation of the Novgorod region from Swedish and Polish forces.

Tikhvin blossomed economically during the 17th and 18th centuries. The products of Tikhvin's blacksmiths enjoyed special demand and were bought not only in Russian cities but also abroad. Tikhvin became one of the points for foreign trade in Russia and Tikhvin Fair was one of the largest in the country. The bloom in trade and crafts in the 17th century contributed to an increase of the settlement's population, which grew considerably.

Stone buildings were permitted only on the territory of the monastery. In the 16th century, in addition to the cathedral, a stone refectory was built, and a church dedicated to the birth of the Mother of God was erected in 1581. In 1600, a five-roofed belfry was constructed. An especially intense period of stone construction took place in the second half of the 17th century, when all the wooden buildings in the monastery were replaced by ones of stone. As a result of these works, a highly artistic ensemble of historical and architectural monuments was created on the territory of the monastery, which is mostly preserved to this day, although in the 18th and 19th centuries some of the cloister buildings underwent reconstruction which altered their original appearance.

Since their construction in 1560, Tikhvin owed its allegiance to the monastery and convent. In 1723, after a prolonged fight, the inhabitants of Tikhvin were freed from monastery control and obtained their own administration, a magistrate who answered to Novgorod Province office. The settlement was not totally separated from the monastery until 1764, after an edict concerning the transfer of the monastery's property to the state. In 1773, Tikhvin was granted town status.[5]

During World War II, Tikhvin was occupied by Nazi troops from November 8, 1941 to December 9, 1941.[5] Due to counterattacks on the part of Soviet forces, it had to be abandoned after one month, but many architectural monuments were destroyed during that time. The re-capture of Tikhvin is considered to have been extremely vital in the execution of the Road of Life during the Siege of Leningrad, thanks to its railway. It allowed the Soviets to provide much more foodstuffs in comparison to the makeshift land road previously used.

In Soviet times, the largest employer in Tikhvin was a heavy machine factory, known as Transmash up to 2001, where tractors and defense equipment were manufactured. In its heyday, 20,000 people were employed there. The plant was very negatively affected by the dissolution of the Soviet Union and post-Soviet economic problems. Tractor production ceased in 2003 and by 2005, its workforce was reduced to about a thousand. The plant was acquired in 2001 by the ICT Group and restructured, a ferroalloy plant (acquired by Mechel in 2008), and rail wagon building plant were constructed in the first decade of the 21st century.

Other industrial enterprises in the town include the manufacturing of furniture for IKEA, a construction company, a wood-chemical plant (producing rosin, resin, turpentine, and other such wood-based chemicals), a meat-packing plant, a dairy plant, a bread factory, and other light enterprises.

The A114 Highway, connecting Vologda with Cherepovets and St. Petersburg, passes Tikhvin as well. There are also local roads.

The whole course of the Tikhvinka River is a part of the Tikhvinskaya water system, one of the waterways constructed in the early 19th century to connect the basins of the Volga and the Neva Rivers. The waterway runs from the Syas upstream the Tikhvinka. Lake Yelgino is connected by the Tikhvin Canal, 6 kilometers (3.7 mi) with the upper course of the Volchina River. The waterway then follows downstream the Gorun River, the Chagodoshcha River, and the Mologa River. Currently, it is not used for any commercial navigation. Most of the locks built on the Tikhvinka decayed and are not in use.[10]

Today, Tikhvin is divided into two parts: the "old town", which preserves the look of a small provincial town, and the "new town", consisting of apartment blocks built after World War II in the typical Soviet style. The majority of the population lives in the "new town". The houses and buildings of the "old town" are mostly wooden; in the center square, which until the 20th century was the commercial heart of the town, stands a restored cathedral, Savior of the Transfiguration, which is the main church in the town. In addition to the cathedral, a number of notable buildings are preserved around the square, including the hotel "St. Petersburg" (now Sberbank) and the "Guest Court", which was closed for many years after the dissolution of the Soviet Union, but has been completely restored and now functions as a shopping center.

An additional point of interest is the historical part of the town with old wooden buildings and planning characteristic of the 18th century. The ruins of wooden sluices from the 19th century has been preserved as well; these are the remains of the Tikhvinskaya water system.

The famous Russian composer, Nikolai Rimsky-Korsakov, was born in Tikhvin. His house has been converted into a museum. 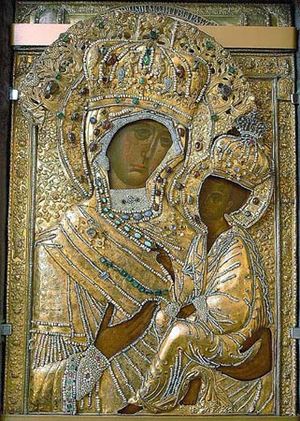 The Theotokos of Tikhvin icon

The main architectural and historical sight of town is the Monastery of Dormition, founded in 1560. The monastery is famed for the Theotokos of Tikhvin icon. According to legend, it appeared on the shore of the Tikhvinka River on June 26 (July 9), 1383; later at this place the monastery and town would be built.

Tikhvin is twinned with: