The Timor Sea (Indonesian: Laut Timor; Portuguese: Mar de Timor) is a relatively shallow sea bounded to the north by the island of Timor, to the east by the Arafura Sea, to the south by Australia and to the west by the Indian Ocean.

The sea contains a number of reefs, uninhabited islands and significant hydrocarbon reserves. International disputes emerged after the reserves were discovered resulting in the signing of the Timor Sea Treaty.

It is possible that Australia's first inhabitants crossed the Timor Sea from Indonesia at a time when sea levels were lower.[citation needed]

The Timor Sea is located in the eastern Indian Ocean

The waters to the east are known as the Arafura Sea. The Timor Sea is adjacent to three substantial inlets on the north Australian coast, the Joseph Bonaparte Gulf, Beagle Gulf and the Van Diemen Gulf. The Australian city of Darwin is the only large city to adjoin the sea. The small town of Wyndham is located on the west arm of Cambridge Gulf, an inlet of Joseph Bonaparte Gulf.

Rivers that enter the Timor Sea from the Northern Territory include Fish River, King River, Dry River, Victoria River and the Alligator Rivers. Rivers in the Kimberley region that flow into the Timor Sea include the Ord River, Forrest River, Pentecost River and Durack River.

The sea is about 480 km (300 statute miles) wide, covering an area of about 610,000 km². (235,000 square miles). Its deepest point is the Timor Trough (which some geologists consider is the south-eastern extension of the Java Trench, but others view as a foreland trough to the Timor Island "mountain range"), located in the northern part of the sea, which reaches a depth of 3,300 m (10,800 ft). The remainder of the sea is much shallower, much of it averaging less than 200 m (650 ft) deep, as it overlies the Sahul Shelf, part of the Australian continental shelf.

The Big Bank Shoals is an area on the sloping seabed between the continental shelf and the Timor Trough where a number of submerged banks are located.[2] The ecosystem of the shoals is significantly different to the deeper waters surrounding them. In May 2010, it was announced that a crater about 50 km wide has been discovered on the seabed of the Timor Sea.[3] 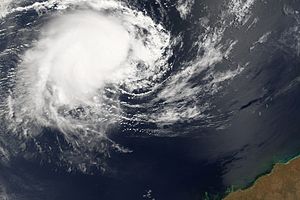 The International Hydrographic Organization (IHO) defines the Timor Sea as being one of the waters of the East Indian Archipelago. The IHO defines its limits as follows:[4]

On the East. The Western [limit] of the Arafura Sea [A line from Cape Don to Tanjong Aro Oesoe, the Southern point of Selaroe (Tanimbar Islands)].

On the South. The North coast of Australia from Cape Don to Cape Londonderry (Lua error in Module:Coordinates at line 668: callParserFunction: function "#coordinates" was not found.).

On the West. A line from Cape Londonderry to the Southwest point of Roti Island (Lua error in Module:Coordinates at line 668: callParserFunction: function "#coordinates" was not found.).

Many tropical storms and cyclones originate or pass through the Timor Sea. In February 2005, Tropical Cyclone Vivienne disrupted oil and gas production facilities in the area, and the next month, Severe Tropical Cyclone Willy interrupted production.[citation needed]. Petroleum production facilities are designed to withstand the effects of cyclones, although as a safety precaution production is often reduced or temporarily halted and workers evacuated by helicopter to the mainland - usually to Darwin or Dili. 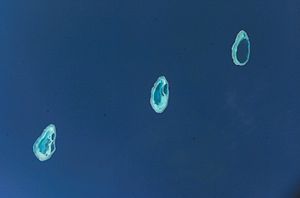 A number of significant islands are located in the sea, notably Melville Island, part of the Tiwi Islands, off Australia and the Australian-governed Ashmore and Cartier Islands. It is thought that early humans reached Australia by "island-hopping" across the Timor Sea.

Scott and Seringapatam Reefs formed in the area and to the west on the same underwater platform is the Rowley Shoals.

The Timor Current is an oceanic current that runs south-west in the Timor Sea between the Indonesia archipelago and Australia. It is a major contributor to the Indonesian Throughflow that transports water from the Pacific Ocean to the Indian Ocean.

Oil slick from the Montara oil spill in the Timor Sea September, 2009.

Beneath the Timor Sea lie considerable reserves of oil and gas. A number of offshore petroleum projects are in operation and there is considerable exploration activity either underway and numerous proposed projects. A gas pipeline crosses the Timor Sea from the Joint Petroleum Development Area to Wickham Point near Darwin.[5]

The Timor Sea was the location for Australia's largest oil spill when the Montara oil field leaked oil, natural gas and condensate from 21 August to 3 November 2009.[6] During the spill 400 barrels of oil leaked each day. The Montara Commission of Inquiry placed blame on the Thai company PTTEP, owner of the wells.[1]

The largest petroleum project in operation in the Timor Sea is the Bayu-Undan project operated by ConocoPhillips. The Bayu-Undan field is located approximately 500 km north-west of Darwin. Production commenced in 2004 as a gas recycle project - with liquids (condensate, propane and butane) being stripped from the raw production stream and exported. Gas was pumped back down into the reservoir. At around the same time, construction commenced on a 500 km subsea natural gas pipeline connecting the Bayu-Undan processing facility to a liquefied natural gas plant situated at Wickham Point in Darwin harbour. Since the completion of the pipeline and the Darwin LNG plant in 2005, gas produced offshore at Bayu-Undan is now transported to the Darwin plant where it is converted into a liquid and transported to Japan under long-term sales contracts.[7]

AED Oil owns the large oil project at Puffin oilfield and Woodside Petroleum is producing oil at the Laminaria oilfield. The Greater Sunrise gas field, discovered in 1974, is one of the largest in the area and is expected to earn East Timor several billion dollars in royalty revenues. Woodside Petroleum plans to process gas from Greater Sunrise via a floating platform, however Xanana Gusmão, East Timor's Prime Minister opposes this plan and instead wants the gas to go to Dili via a pipeline for processing.[8]

Australia's territorial claim extends to the bathymetric axis (the line of greatest sea-bed depth) at the Timor Trough. It overlaps East Timor's own territorial claim, which follows the former colonial power Portugal and the United Nations Convention on the Law of the Sea in claiming that the dividing line should be midway between the two countries.

The Timor Sea Treaty, which was signed on the 20 May 2002, led to the establishment of the Timor Sea Designated Authority (TSDA). This organisation is responsible for the administration of all petroleum-related activities in a part of the Timor Sea known as the Joint Petroleum Development Area (JPDA). The treaty was ratified in February 2007.[9]

During the 1940s the Japanese navy conducted air raids on Australia from ships in the Timor Sea. On the 19 February 1942 the Japanese aircraft carrier Kaga with other vessels, launched air strikes against Darwin, Australia, sinking nine ships, including the USS Peary. This bombing marked the beginning of the Battle of Timor in the Pacific theatre of World War II.