Toktar Aubakirov was born in Karkaraly region, Karagandinskaya Oblast, Kazakh SSR, which is now Kazakhstan. After graduating from the 8th grade of a secondary school he started working as a metal turner at the Temirtau foundry, whilst attending an evening school. In 1965 he joined the Armavir Military Aviation Institute of the Anti-Air Defence Pilots. He served as a fighter pilot in the Soviet Air Force on the Far East borders of the USSR until his acceptance into the M. Gromov Test Pilot's School in 1975.

In 1991, in accordance with an agreement between the governments of the USSR and the Kazakh SSR, started training at the Gagarin Cosmonaut Training Centern. On 2 October 1991 he launched with Russian cosmonaut Alexander Volkov as flight commander, and the Austrian research cosmonaut Franz Viehböck in Soyuz TM-13 from the Baikonur Cosmodrome spaceport, and spent over eight days in space.

Since 1993, he has been the general director of the National Aerospace Agency of Republic of Kazakhstan. He was a member of the Kazakhstan parliament. Now he is a pensioner and consultant.

Toktar Aubakirov is married to Tatyana Aubakirova. They have two children: Timur (born in 1977) and Mikhail (born in 1982). 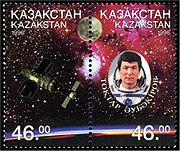 Featured on a stamp