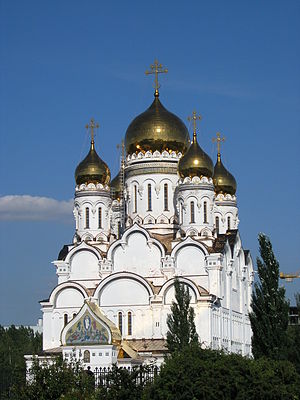 Internationally, the city is best known as the home of Russia's largest car manufacturer AvtoVAZ (Lada), which was founded in the late 1960s.

It was founded in 1737 as a fortress called Stavropol (Ста́врополь) by the Russian statesman Vasily Tatishchev.[citation needed] Informally it was often referred as Stavropol-on-Volga (Ста́врополь-на-Во́лге, Stavropol-na-Volge) to distinguish from Stavropol, a large city in southwest Russia.

The construction of the Kuybyshev Dam and Hydroelectric Station on the Volga River in the 1950s created the Kuybyshev Reservoir, which covered the existing location of the city, and it was completely rebuilt on a new site. In 1964, the city was renamed Tolyatti (after Palmiro Togliatti, the longest-serving secretary of the Italian Communist Party).

For the administrative purposes, the city is divided into three districts: 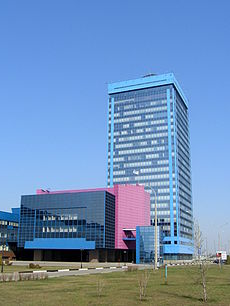 The city's main claim to fame has been automobile manufacturing by AvtoVAZ's Lada (Zhiguli) car plants, employing some 110,000 people: in cooperation with Italy's Fiat since 1970 and with General Motors since 2001.[11]

Other industries have moved into Tolyatti because it is close to abundant supplies of electricity and water. Petrochemicals are well represented in the city. Among the significant enterprises based there are "TogliattiAzot" (Russia's biggest ammonia manufacturer headed[when?] by Sergei Makhlai) and "KuibyshevAzot" (a nitrogen fertilizer manufacturer and Russia's biggest caprolactam and polyamide producer). Other industries include building materials production, ship repair and electrical equipment and electronics.[citation needed]

In 2011 the Togliatti Special Economic Zone was launched in order to develop the region further and diversify the economy of the city. Several auto-component producers (German Mubea and Japanese Sanoh among them) have since been registered, as well as large industrial manufacturers (Praxair and Edscha). By November 2012 the value of project investment totalled 10 billion Rubles and around 3000 jobs were being created.[12] 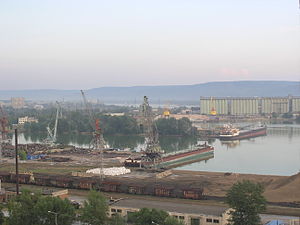 River port on the Volga

The transport system is well developed in the city. Public transport includes municipal buses and trolley-buses, and so-called "alternative" (commercial) transport or marshrutkas.

External transport routes are provided by two bus stations, two railway stations and a city harbour. Tolyatti has its airport as well, but it is used by personal aircraft only (the nearest international airport, Kurumoch, is located 40 km away, towards Samara). The city is linked to the federal road network by the M5 "Ural" highway.

As one of Russia's "motor cities",[clarification needed] Tolyatti's car population has been greatly expanded, and traffic jams are common during morning and evening rush hours — Samara Oblast was one of the first regions to receive an additional licence plate code because its existing code did not have enough numbers for all its residents' cars.[citation needed] 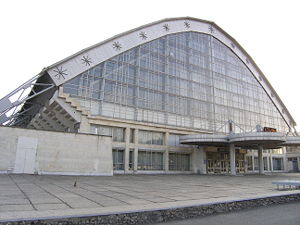 The creation of the Kuybyshev Reservoir in the 1950s destroyed much of the city's history, so almost all the city's cultural points of interest date from the Soviet period, but the city administration has continued to build new monuments and cathedrals. A recent notable event was the 1998 opening of the large Tatishchev Monument near the Volga. The Transfiguration Cathedral was completed in 2002.

Education is represented by over one hundred public and ten private schools, as well as several higher education institutions. Most notable ones include:

In eyes of the Soviet leaders, Tolyatti was a perfect Soviet city (since most population migrated here during the construction of AvtoVAZ factories) – many sports facilities appeared so that the "perfect Soviet person" could be healthy. The city has high-quality sports facilities: gymnasiums, swimming pools, ice arenas, association football and racing stadiums — as a result, many athletes, including Olympic Champion Alexei Nemov, Stanley Cup winners Alexei Kovalev and Ilya Bryzgalov had moved to Tolyatti. Current Montreal Canadiens defensemen Alexei Emelin, and Former Washington Capitals winger Viktor Kozlov and defenseman Alexei Tezikov were born there.

Tolyatti is represented in almost every kind of team sports. Tolyatti's Lada-sponsored Ice Hockey Club broke the Moscow teams' domination of the game. The Lada women's football team has won the Russian championship several times — and the Lada women's handball team, who are the Russian and European Champions, is the core for Russian national women's handball. Men's football (FC Lada Togliatti and FC Togliatti), basketball, speedway and handball teams also take part in national championships. As for the traditional national sport of Russia, bandy, there is a team founded in 2013, TOAZ,[13] which however only takes part in a recreational league.

And there are other monuments outside the parks. The City Duma has been energetic in creating or designating historical and cultural monuments, ranging from the colossal equestrian Tatishchev Monument to the tumbledown Repin House and a monument to a faithful dog, and many other types.

There are a number of local newspapers published in Tolyatti: Ploshchad Svobody, Tolyattinskoye Obozreniye (Tolyatti Observer), business newspaper "Monday" ("Ponedelnik"), Volny Gorod, Gorodskiye Vedomosti, and a few others. In the end of the 1990s, Tolyattinskoye Obozreniye published a series of articles on a local crime group. The stories drew attention to the group's connections with the local police.[14][15] Subsequently, Togliatti Review saw two of its editors (Valery Ivanov and Alexei Sidorov) killed in 2002-2003.[16][17][18][19]

During the morning rush hour of 31 October 2007, a bomb exploded on a passenger bus in the city, killing at least eight people and injuring about 50 in what Irina Doroshenko, a spokeswoman for the investigative wing of the local prosecutor’s office, said could be a terrorist attack.[20] At the beginning of the investigation, it was believed to be the work of terrorists from the North Caucasus.[21] Early reports indicated possible involvement of Chechen terrorist Doku Umarov.[22] However, the officials later named a 21-year-old Evgeny Vakhrushev, who also died in the blast, as the only person to be responsible for the tragedy.[23]

The city also has a reputation for gang violence.[24][25]

The city has witnessed a mafia killing spree: there have been 550 commissioned killings in Tolyatti over 1998-2004, five of those murdered were journalists.[26]

Three chief architects of Tolyatti were victims of violent crimes: Valery Lopatin was shot to death on July 7, 2004, Mikhail Syardin and Aleksander Kiryakov were also injured in violent attacks.[27]

On December 13, 2008, Anatoly Stepanov, a vice-speaker of Duma of Samara Oblast, a former head of administration of Tsentralny City District of Tolyatti in 1991-1997 and Tolyatti mayor candidate in 2004, was attacked on a street and left with serious head injuries. He died in hospital on February 24, 2009.[29]

Mayor Sergey Andreyev was elected in 2012.

Tolyatti is twinned with: