Thomas John "Tom" Miller (born August 11, 1944) is an American attorney and politician who currently serves as the Attorney General of Iowa. After the defeat of West Virginia Attorney General Darrell McGraw in 2012, Miller became the longest continuously serving state attorney general in the United States.

Miller was raised in Dubuque, Iowa. He graduated from Wahlert Catholic High School in Dubuque, earned his undergraduate degree at Loras College in Dubuque, and completed his law degree at Harvard Law School in 1969.[1] 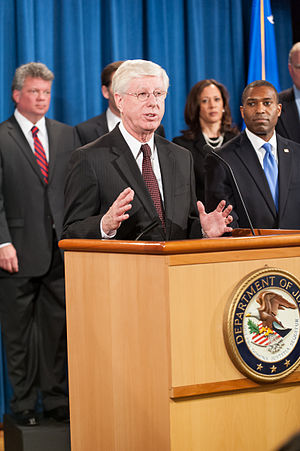 Tom Miller speaking at a department of justice press event.

He served as an AmeriCorps VISTA volunteer in Baltimore for one year and as a legislative assistant to U.S. Rep. John Culver of Iowa, worked for the Baltimore Legal Aid Bureau, and taught at the University of Maryland School of Law.

Miller returned to northeast Iowa in 1973 and opened a law practice in McGregor, Iowa. He served as the city attorney for McGregor and Marquette for five years.

Miller was first elected Attorney General of Iowa in 1978. He is serving his nineth four-year term as of 2015, and is the longest-serving state attorney general in the nation. He was re-elected in 1982 and 1986. In 1990 he ran for governor, and lost in the state party primary election the Democratic Party's nomination to Donald Avenson. He worked in private practice with the Des Moines office of the Faegre & Benson Law Firm. Miller was again elected Attorney General of Iowa in 1994, and was re-elected in 1998, 2002, 2006, 2010, and 2014. [2]

On March 6, 2014, Miller joined a lawsuit targeting California's prohibition on the sale of eggs laid by caged hens kept in conditions more restrictive than those approved by California voters. In October 2014, a California judge dismissed the lawsuit, rejecting the arguments of the attorneys-general concerning California'sProposition 2, a 2008 ballot initiative. Judge Kimberly Mueller ruled that Iowa and the other states lacked legal standing to sue on behalf of their residents and that the plaintiffs were representing the interests of egg farmers, rather than "a substantial statement of their populations." Iowa joined the lawsuit after Representative Steve King's attempt to overturn the California law via the federal farm bill failed. [3][4][5][6][7] A DesMoines Register article noted that the rejection of the Koster challenge and a similar lawsuit targeting California's prohibition on the sale of foie gras should prompt the reconsideration of litigation strategies by ag state officials, and encouraged instead the embrace of legislative solutions aiming for national, uniform standards like those embodied in the Egg Products Inspection Act of 2013, scuttled in the U.S. Congress by beef and pork producers. [8][9]