From Infogalactic: the planetary knowledge core
Jump to: navigation, search
This article is about a major city in Russia. For Tomsk the Womble, see The Wombles.

File:FoundingSpotTomsk.jpg
The "Where Tomsk was Founded" marker at the Tomsk History Museum

Tomsk originated with a decree from Tsar Boris Godunov in 1604 after ru , the Tatar duke of ru , asked for the Tsar's protection against Kirghiz bandits.[12] The Tsar sent 200 Cossacks under the command of ru and Gavriil Ivanovich Pisemsky to construct a fortress on the bank of the Tom River, overlooking what would become the city of Tomsk. Toian ceded the land for the fortress to the Tsar.[13]

In 1804 the Imperial Russian government selected Tomsk as the seat of the new Tomsk Governorate, which would include the modern cities of Novosibirsk, Kemerovo, and Krasnoyarsk, as well as the territories now in Eastern Kazakhstan. The new status brought development and the city grew quickly.[13]

The discovery of gold in 1830 brought further development to Tomsk in the 19th century; however, when in the 1890s the Trans-Siberian Railway bypassed the city in favor of the village of Novonikolayevsk (Novosibirsk), development began to move south to connect with the railway. In time, Novosibirsk would surpass Tomsk in importance.

In the mid-19th century one fifth of the city's residents were exiles. However, within a few years, the city would be reinvented[by whom?] as the educational center of Siberia with the establishment of Tomsk State University (founded in 1880) and Tomsk Polytechnic University (founded in 1896). By World War II, every twelfth resident of the city was a student,[13] giving rise to the city's informal name - the Siberian Athens.

After the October Revolution of 1917 the city became a notable center of the White movement, led by Anatoly Pepelyayev and Maria Bochkareva, among others. After the victory of the Red Army in the 1920s, Soviet authorities incorporated Tomsk into the West Siberian Krai and later into Novosibirsk Oblast.

Like many Siberian cities, Tomsk became the new home for many factories relocated out of the war zone from 1941. The resulting growth of the city led the Soviet government to establish the new Tomsk Oblast, with Tomsk serving as the administrative center.[13]

During the Cold War Tomsk became one of many designated closed cities,[14] which outsiders and, in particular, foreigners, could not visit. In 1949 matters went a stage further with the establishment of a secret city, known as "Tomsk-7" (or sometimes simply as "Postbox 5") 15 kilometres (9 miles) north-west of Tomsk; the new settlement became the home of the Tomsk Nuclear Plant (subsequently[when?] renamed the Sibirskaya Nuclear Power Plant), the Soviet Union's first industrial-scale nuclear-power station. Tomsk-7 received municipal status in 1956 and was renamed Seversk in 1992. 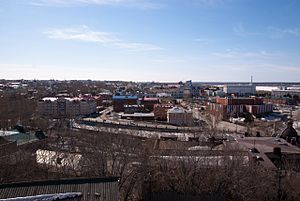 Tomsk, view from the fire-observation tower

Tomsk is governed by a mayor and a 33-member Duma. The current mayor, appointed in 2013, is Ivan Klyain,[18] a member of The United Russia party.

Of the 33 members, 16 are elected from the eight double mandate districts while 17 are chosen from party lists.

In the October 2005 local elections, United Russia was expected to cruise to a solid victory; however, the Pensioners Party put up a strong showing. The final count was (proportional representation): 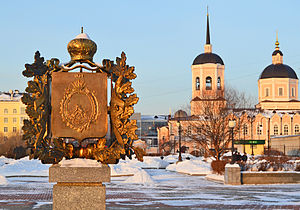 Tomsk has the oldest electrical grid in Siberia. There are three powerstations in the city:

Tomsk consumes more electric energy than it produces. The bulk of the city's electric and thermal energy is produced by the GRES-2 (281 MWt) and TEC-3 (140 MWt) powerplants, belonging to Tomskenergo Inc. Tomsk supplements its energy needs with electricity generated at Seversk. 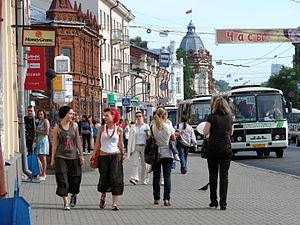 There is a commercial and passenger port on the Tom River.

The city is served by the Bogashevo Airport.

The main part of inner-city and suburban transportation is provided by marshrutkas (routed taxis), mainly PAZ) minibuses, which serve about forty routes.

Tomsk Bogashevo Airport is served by the following airlines:

Tomsk has a number of prominent institutions of higher education, including:

A large number of educational institutions in the city have contributed to making Tomsk a major center for Russia's IT industry. Tomsk was one of the first cities in Russia to gain access to the Internet, which became available in the early 1990s owing to grants received by universities and scientific cooperation.

Tomsk has many local cultural institutions including several drama theaters as well as a children's theater and a puppet theater. Major concert venues in the city include the Conservatory Concert hall and the Tomsk Palace of Sport. The city also boasts cultural centers dedicated to German, Polish and Tatar languages and culture.

One of the city's prominent theaters was destroyed in an act of terrorism in 1905. The Korolevsky Theater (built in 1884–85) was being used by a group of communist revolutionaries when the theater was attacked and set on fire by members of the Black Hundred, a hard-line nationalist organization. Those who escaped the flames were gunned down by Black Hundred members waiting outside the theater. Estimates put the number of casualties between 200 and 1000.

There are a number of museums in Tomsk devoted to various subjects, most notably art, local history and wood carving. There is also a Museum of Oppression, housed in a former KGB dungeon. Tomsk State University has a number of small museums with exhibits on archaeology, paleontology, zoology, as well as a herbarium and a botanical garden

As in many other cities in the former Soviet Union, the revolutionary government destroyed a number of old churches in the city including two that had existed since the 17th century. However, Tomsk managed to save some of its churches by transforming them into machine shops, warehouses, archives, and even residential buildings. Since the end of the communist era some of the churches have been renovated and returned to their congregations.

Tomsk is well known for its intricate "gingerbread" decoration of traditional wooden houses in the area. However, the number of old homes in this style is decreasing due to redevelopment or some of them catching fire, as the structures have little to no fire protection.

Trud (Labor) Stadium, in central Tomsk is the base for matches with the FC Tom Tomsk, the city's professional football club. The team's 2004 promotion to the Russian Premier League gave local fans a chance to see some of the nation's best teams play at the city's own stadium.

Tomsk has many local media outlets including the TV2 television station, shut down by the authorities and turned into an internet TV medium,[19] the radio stations Radio Siberia and Echo of Moscow in Tomsk along with several newspapers (Tomskaya Nedelya, Krasnoye Znamya and Vechernii Tomsk).

In April 2006 Tomsk received international media attention as the venue of a major summit on economic cooperation, held in the city between Russian President Vladimir Putin and German Chancellor Angela Merkel.

Tomsk was the name given by children's author Elizabeth Beresford to one of her fictional characters The Wombles, all of whom are named after places.

Tomsk is the only non-capital member of the Asian Network of Major Cities 21.

Tomsk is twinned with: