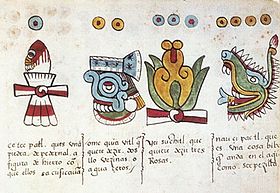 The tonalpohualli Nahuatl pronunciation: [toːnaɬpoːˈwalːi], a Nahuatl word meaning "count of days", is an Aztec version of the 260-day calendar in use in pre-Columbian Mesoamerica. This calendar is neither solar nor lunar, but rather consists of 20 (veintenas), 13-day (trecenas) periods. Each trecena is ruled by a different deity. 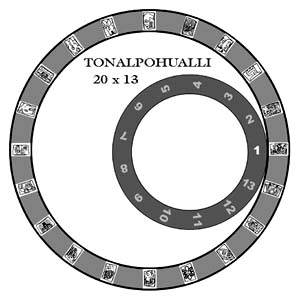 The other major Aztec calendar, the xiuhpohualli, is a 365-day year, based on 18 months of 20 days and five nameless days. A xiuhpohualli was designated by the name of its first tonalpohualli day. For example, Hernán Cortés met Moctezuma II on the day 8 Wind in the year 1 Reed[citation needed] (or November 8, 1519 in the Julian calendar[1]).

The xiuhpohualli and the tonalpohualli would coincide approximately every 52 years.

Note that the symbols are arranged counterclockwise around the calendar stone.