From Infogalactic: the planetary knowledge core
Jump to: navigation, search
Not to be confused with topography.
This article is about the branch of mathematics. For other uses, see Topology (disambiguation).

Möbius strips, which have only one surface and one edge, are a kind of object studied in topology.

In mathematics, topology (from the Greek τόπος, place, and λόγος, study), is concerned with the properties of space that are preserved under continuous deformations, such as stretching and bending, but not tearing or gluing. This can be studied by considering a collection of subsets, called open sets, that satisfy certain properties, turning the given set into what is known as a topological space. Important topological properties include connectedness and compactness.[1]

Topology developed as a field of study out of geometry and set theory, through analysis of such concepts as space, dimension, and transformation.[2] Such ideas go back to Gottfried Leibniz, who in the 17th century envisioned the geometria situs (Greek-Latin for "geometry of place") and analysis situs (Greek-Latin for "picking apart of place"). Leonhard Euler's Seven Bridges of Königsberg Problem and Polyhedron Formula are arguably the field's first theorems. The term topology was introduced by Johann Benedict Listing in the 19th century, although it was not until the first decades of the 20th century that the idea of a topological space was developed. By the middle of the 20th century, topology had become a major branch of mathematics.

Topology has many subfields: 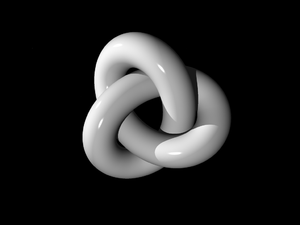 A three-dimensional depiction of a thickened trefoil knot, the simplest non-trivial knot 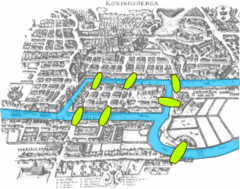 The Seven Bridges of Königsberg was a problem solved by Euler.

Topology began with the investigation of certain questions in geometry by Leonhard Euler. His 1736 paper on the Seven Bridges of Königsberg is regarded as one of the first academic treatises in modern topology.[citation needed] On 14 November 1750 Euler wrote to a friend that he had realised the importance of the edges of a polyhedron. This led to his polyhedron formula, V − E + F = 2 (where V, E and F respectively indicate the number of vertices, edges and faces of the polyhedron). Some authorities regard this analysis as the foundational idea signalling the birth of topology.[3]

Further contributions were made by Augustin-Louis Cauchy, Ludwig Schläfli, Johann Benedict Listing, Bernhard Riemann and Enrico Betti.[4] Listing introduced the term "Topologie" in Vorstudien zur Topologie, written in his native German, in 1847, having used the word for ten years in correspondence before its first appearance in print.[5] The English form "topology" was used in 1883 in Listing's obituary in the journal Nature to distinguish "...qualitative geometry from the ordinary geometry in which quantitative relations chiefly are treated."[6] The term "topologist" in the sense of a specialist in topology was used in 1905 in the magazine Spectator.[citation needed]

Their work was corrected, consolidated and greatly extended by Henri Poincaré. In 1895 he published his ground-breaking paper on Analysis Situs, which introduced the concepts now known as homotopy and homology, which are now considered part of algebraic topology.[4]

Modern topology depends strongly on the ideas of set theory, developed by Georg Cantor in the later part of the 19th century. In addition to establishing the basic ideas of set theory,[citation needed] Cantor considered point sets in Euclidean space as part of his study of Fourier series. For further developments, see point-set topology and algebraic topology.

Topology is also used to refer to a structure imposed upon a set X, a structure that essentially 'characterizes' the set X as a topological space by taking proper care of properties such as convergence, connectedness and continuity, upon transformation.

The motivating insight behind topology is that some geometric problems depend not on the exact shape of the objects involved, but rather on the way they are put together. For example, the square and the circle have many properties in common: they are both one dimensional objects (from a topological point of view) and both separate the plane into two parts, the part inside and the part outside.

In one of the first papers in topology, Leonhard Euler demonstrated that it was impossible to find a route through the town of Königsberg (now Kaliningrad) that would cross each of its seven bridges exactly once. This result did not depend on the lengths of the bridges, nor on their distance from one another, but only on connectivity properties: which bridges connect to which islands or riverbanks. This problem in introductory mathematics called Seven Bridges of Königsberg led to the branch of mathematics known as graph theory.

Similarly, the hairy ball theorem of algebraic topology says that "one cannot comb the hair flat on a hairy ball without creating a cowlick." This fact is immediately convincing to most people, even though they might not recognize the more formal statement of the theorem, that there is no nonvanishing continuous tangent vector field on the sphere. As with the Bridges of Königsberg, the result does not depend on the shape of the sphere; it applies to any kind of smooth blob, as long as it has no holes.

Intuitively, two spaces are homeomorphic if one can be deformed into the other without cutting or gluing. A traditional joke is that a topologist cannot distinguish a coffee mug from a doughnut, since a sufficiently pliable doughnut could be reshaped to a coffee cup by creating a dimple and progressively enlarging it, while shrinking the hole into a handle.

Homotopy classes are larger, because the tails can be squished down to a point. They are:

To classify the letters correctly, we must show that two letters in the same class are equivalent and two letters in different classes are not equivalent. In the case of homeomorphism, this can be done by selecting points and showing their removal disconnects the letters differently. For example, X and Y are not homeomorphic because removing the center point of the X leaves four pieces; whatever point in Y corresponds to this point, its removal can leave at most three pieces. The case of homotopy equivalence is harder and requires a more elaborate argument showing an algebraic invariant, such as the fundamental group, is different on the supposedly differing classes.

Letter topology has practical relevance in stencil typography. For instance, Braggadocio font stencils are made of one connected piece of material.

Formally, let X be a set and let τ be a family of subsets of X. Then τ is called a topology on X if:

If τ is a topology on X, then the pair (X, τ) is called a topological space. The notation Xτ may be used to denote a set X endowed with the particular topology τ.

A set with a topology is called a topological space.

While topological spaces can be extremely varied and exotic, many areas of topology focus on the more familiar class of spaces known as manifolds. A manifold is a topological space that resembles Euclidean space near each point. More precisely, each point of an n-dimensional manifold has a neighbourhood that is homeomorphic to the Euclidean space of dimension n. Lines and circles, but not figure eights, are one-dimensional manifolds. Two-dimensional manifolds are also called surfaces. Examples include the plane, the sphere, and the torus, which can all be realized without self-intersection in three dimensions, but also the Klein bottle and real projective plane, which cannot.

The fundamental concepts in point-set topology are continuity, compactness, and connectedness. Intuitively, continuous functions take nearby points to nearby points. Compact sets are those that can be covered by finitely many sets of arbitrarily small size. Connected sets are sets that cannot be divided into two pieces that are far apart. The words nearby, arbitrarily small, and far apart can all be made precise by using open sets. If we change the definition of open set, we change what continuous functions, compact sets, and connected sets are. Each choice of definition for open set is called a topology. A set with a topology is called a topological space.

The most important of these invariants are homotopy groups, homology, and cohomology.

More specifically, differential topology considers the properties and structures that require only a smooth structure on a manifold to be defined. Smooth manifolds are 'softer' than manifolds with extra geometric structures, which can act as obstructions to certain types of equivalences and deformations that exist in differential topology. For instance, volume and Riemannian curvature are invariants that can distinguish different geometric structures on the same smooth manifold—that is, one can smoothly "flatten out" certain manifolds, but it might require distorting the space and affecting the curvature or volume.

In high-dimensional topology, characteristic classes are a basic invariant, and surgery theory is a key theory.

Low-dimensional topology is strongly geometric, as reflected in the uniformization theorem in 2 dimensions – every surface admits a constant curvature metric; geometrically, it has one of 3 possible geometries: positive curvature/spherical, zero curvature/flat, negative curvature/hyperbolic – and the geometrization conjecture (now theorem) in 3 dimensions – every 3-manifold can be cut into pieces, each of which has one of eight possible geometries.

2-dimensional topology can be studied as complex geometry in one variable (Riemann surfaces are complex curves) – by the uniformization theorem every conformal class of metrics is equivalent to a unique complex one, and 4-dimensional topology can be studied from the point of view of complex geometry in two variables (complex surfaces), though not every 4-manifold admits a complex structure.

Occasionally, one needs to use the tools of topology but a "set of points" is not available. In pointless topology one considers instead the lattice of open sets as the basic notion of the theory,[15] while Grothendieck topologies are structures defined on arbitrary categories that allow the definition of sheaves on those categories, and with that the definition of general cohomology theories.[16]

Knot theory, a branch of topology, is used in biology to study the effects of certain enzymes on DNA. These enzymes cut, twist, and reconnect the DNA, causing knotting with observable effects such as slower electrophoresis.[17] Topology is also used in evolutionary biology to represent the relationship between phenotype and genotype.[18] Phenotypic forms that appear quite different can be separated by only a few mutations depending on how genetic changes map to phenotypic changes during development.

In physics, topology is used in several areas such as quantum field theory and cosmology.

Although TQFTs were invented by physicists, they are also of mathematical interest, being related to, among other things, knot theory and the theory of four-manifolds in algebraic topology, and to the theory of moduli spaces in algebraic geometry. Donaldson, Jones, Witten, and Kontsevich have all won Fields Medals for work related to topological field theory.

In cosmology, topology can be used to describe the overall shape of the universe.[20] This area is known as spacetime topology.[citation needed]

The various possible positions of a robot can be described by a manifold called configuration space.[21] In the area of motion planning, one finds paths between two points in configuration space. These paths represent a motion of the robot's joints and other parts into the desired location and pose.[citation needed]